A City Girl's Guide to the Kitschy Ohio State Fair

Once upon a time, because that’s how stories start, Husband spent a summer singing in The Ohio State Fair Youth Choir. He lived in a dorm on the fairgrounds and sang with the choir everyday for the public’s enjoyment. Many years later Husband meets Lisa. They fall in love. They get married. Husband finds out that Lisa has never in her fabulous life been to the State Fair.

Husband drags my city girl butt against her will takes me on a date and allows me to experience the sights, sounds, and kitsch of the Ohio State Fair.

The Ohio State Fair had everything I blog about and more:

The Kitsch
There were quite a few items on sale that were so crappy that no real store would carry it. In other words, most of it was Only Sold On Late Night TV slock. The Wonder Shamy, the Wonder Mop, the Wonder Cook Wear, the Wonder Underwear (looked like a cheap imitation of Spanx at twice the price and none of the durability of the real thing or the Target knockoff.) I could’ve reduced pain and gotten everlasting health in my feet, neck, back, legs, arms using about 10 different

scams
, I mean, methods/amazing products. My teeth could’ve been their whitest white, my rings cleaned, and the hair ripped from my legs (funny they didn’t offer to do demos on underarms. I suppose they wanted to be environmentally savvy and save old growth forests? Was that a serous TMI faux pas? I think so.) to leave them smooth as silk if only I didn’t want to deal with a hard sales pitch and give each vendor throughout the fair nine-ninety-five–ninety-five-ninety-seven for each scam, I mean, product that you just can’t live without!
Husband and I didn’t do a lot of shopping. However, we did do a lot of laughing to ourselves. Moreover, we saved a ton of money doing so.
The kitsch wasn’t just in the Junk You Can Buy pavilions. Oh no. There were some Roadside America worthy displays to see and experience too. The two most notable were the Giant 15-foot tall talking and pseudo animated (his right hand moves up and down and his head swivels side to side) Smokey Bear and butter cow.
If memory serves me correctly, the real Smokey was a bear cub that grew into an adult bear and is not the 15-foot tall sentient statue I saw at the Ohio State Fair. Yes, our Smokey talks. He calls out to visitors by name and reminds everyone about fire safety. How does Smokey know our names? Maybe he’s tapped into Santa’s all knowing and all seeing list of good and bad kids. It couldn’t be that there’s a person inside Giant Smokey who hears parents saying their kids’ names and then calls out to them over a microphone and sound system built into Smokey Bear. Oh no. That couldn’t be. Our Smokey is magic and omnipotent. And BIG. If you even try to start a forest fire around our Giant Smokey, he will stomp you out like a spent cigarette butt. All in the name of fire safety. Honest.

Then there’s the famous butter cow. 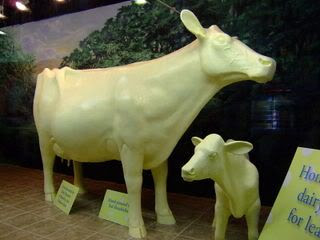 I’m not sure why it’s supposed to be a big, big deal but it is. Maybe it has to do something with the fact that after you gawk at the butter cow (and accompanying butter sculptures of prominent Ohioans including Jake Hanna) that you buy ice cream in the same pavilion? Naaaah!


I think the butter cow may be losing some of her legendary status because this year after the fair, university students are going to melt Bessie down and make biodiesel out of her. Poor Bessie, 14 days of glory only to be gone like melted butter. Moo.

Kitschy Fair Food That Will Melt Your Arteries

No we didn’t try any of these ahem, delicacies. First, they freaked us out and second, I think I heard my arteries clogging every time we just walked past one of these fine food booths. Nope, we settled for local food from the local vendors in the Ohio pavilion for lunch. Then we got an elephant ear made with whole wheat flour from another Ohio vendor. Whole wheat flour instead of white flour? Who knew? Sorta better for us but not really since the thing was still fried and covered in sugar but still, it tasted soooooooo good.

Not that I mocked everything at the fair. There were lots of good things too.

The Fair was surprisingly environmentally sensitive – they had tons of recycling bins throughout the grounds for plastic bottles. In the Ohio foods pavilion they were trying to go Zero Waste, but they didn’t use any of that fancy schamancy eco-green speak to scare the newbies and folk who "didn't know green was something other than a color." They had sets of three bins throughout the pavilion. Brown bins for non-recyclable and non-compostable trash. Blue bins for recyclable containers – glass & plastic bottles & metal cans. Green bins for compostable materials – food waste, paper napkins, and the cutlery, plates, bowls, cups, and hinged containers.

The compostable table wear surprised me. I've heard about about but hadn't seen it up close and in person until now. The surprising thing about it was that it looked like not environmentally friendly Styrofoam tableware, but it was really made from compostable corn, sugarcane and potato starch. Kinda cool, huh?

Now before some of you I-hate-plastic-in-all-shapes-and-forms-including-food-based-plastics yell at me about how not as environmentally nice that stuff is over other food service options, I have to remind you that farmers in Ohio grow the corn that’s used to make these plastics. (Something I didn't realize until I saw some exhibits about it at the fair. Including one exhibit that including a climbing wall made to look like a gianormous ear of corn!) Farming is a tough business. Many Ohio farmers take second jobs to make sure that they can withstand the economic ups and downs of the farm business. Our farmers are benefiting from being able to plant extra corn and having the ability to sell it to another market for plastics/biofuels. Do I think that starch-based plastics and biofuels are the end all be all to our petroleum problems? I'm not 100% sure. However, I do think that it’s a step in the right direction.

Finally, the Ohio State Fair allowed me I meet my goal of “get at least one free swag bag to use as reusable shopping tote bag” courtesy of the fine folks at the Ford Motor Company. Yes, they were there promoting their gas chugging F150 trucks instead of their lone hybrid SUV. But I can’t complain too much about the company since Husband and I both drive small fuel efficient (and paid off) Ford cars. Besides, I’ve already written the Ford company headquarters in Dearborn and told them that I’d love to replace my current Ford car with a small hybrid car and not with a hybrid SUV and suggested that they put their efforts into making a hybrid sedan which I and the Ford car-loving public would surely buy over say, the other hybrid cars that are outselling Fords nonhybrids. So I didn’t give the PR people any guff for promoting the product that Ford told them to promote. I thanked them politely for the bag (made from material made from recycled plastic bottles, who knew?) and cringed when they gave Husband yet another t-shirt that he doesn’t need (he gets one for every 5K race that he enters. He runs and races a lot. He has lots of free t-shirts.)

I wanted to make a tote bag out of Husband’s shirt or at least put it in the pile of t-shirts destined to become another t-shirt quilt. However, Husband had other ideas. (How dare he think on his own?! Oh. Wait. That's what I love about him. That he has his own opinions and we have amazing discussions about everything under the sun. Drat! I can't win for losing.) Husband said that he worked hard to win his shirt in the silly promo game. (Point of order. No he did not and neither did I. The game was an answer-the-question-about-the-product-and-even-if-you-get-the-answer-wrong-you-still-get-the-swag-as-a-consolation-prize game. I know. I’ve created many of these "games" for marketing/PR gigs.) Husband said that he’d like to wear his new freebie just once before it becomes recycle fodder. OK, I can deal with that. But I’ll get that t-shirt in the end I tell you. Just you wait, Henry Higgins, just you wait.

Well, I love all things kitsch, so your post was great fun for me to read - I especially loved the picture of the butter cow.

I'll be back for sure!