One of the great things about buying our Condo is that Husband and I finally have a porch and yard of our very own to decorate for the holidays. The first year we decided to decorate for Halloween, we opened a bottle of wine and after a glass or so, decided “Hey - let’s put out the Halloween decorations!” This is what we came up with. A Seadog Cemetery. Granted it's a small cemetary. We confined it to our flower beds so we wouldn't have to deal with the HOA's lawn service mowing over our holiday decorations.

This is Captain Twiggy. He’s the guy that started it all. For about 8 years, Captain Twiggy was our lone Halloween decoration because Husband and I were performing at the Ohio Renaissance Festival every weekend in October and honestly between the weekend acting job and our weekday professional jobs, a pirate skeleton on the door was about as much holiday décor that we could handle at the time. Now Captain Twiggy hangs out in our sea dog cemetery drinking his favorite brew – Rogue’s Dead Guy Ale. 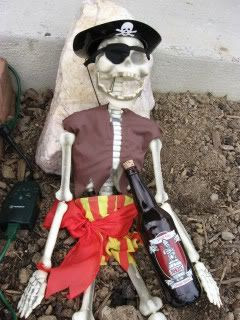 Sadly, Captain Twiggy’s a lush. As you can see, he’s been hanging out alone in the graveyard for a little too long because there’s quite the pile of empty wine bottles by his side. I can’t help but think that if Captain Twiggy didn’t spend all of his time chugging grog in a graveyard that he’d still have a little more meat on his bones and be a little more lively. 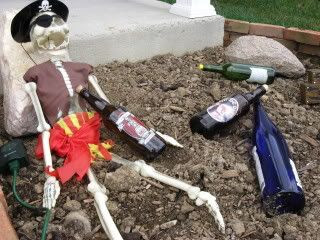 Later we got Captain Twiggy a drinking buddy in the form of a gianormous pirate rat. 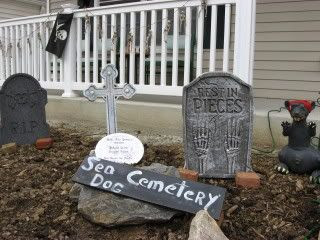 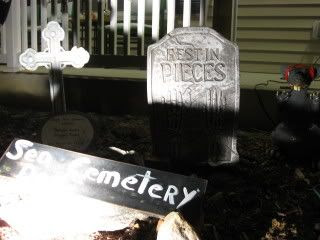 To make sure that all of my neighbors know that our cemetery isn’t just some ordinary run of the mill Halloween cemetery but a cemetery full of pirates, I made the Sea Dog Cemetery sign by roughing up the paint and removing the cheesey saying from a cheap dollar store Halloween sign with a palm sander. Then I painted “Sea Dog Cemetery” on it with white craft paint, and propped up it on rocks in the flowerbed.

If you were a fan of the TV show Buffy the Vampire Slayer you’ll recognize the saying on this grave marker from Season 5. It reads “Buffy Ann Summers 1981 – 2001 Beloved Sister Devoted Friend She Saved the World a Lot.” (This isn’t a series end spoiler kids. There is a Season 6 of the show. That means Buffy gets... um, better.) 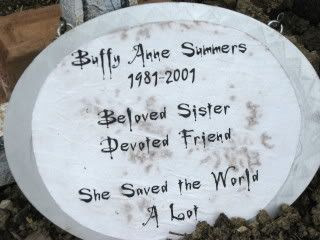 I made Buffy's grave marker by painting over yet another cheap and cheesy metal sign with leftover silver spray paint. I created the sign in Photoshop with a font that was inspired by (but not quite copyright infringement) the Buffy the Vampire Slayer logo font. I didn’t design the font. I downloaded it from a free font Website that I don't have the link for anymore. I crumbled the paper and smoothed it out before tea dying it by rubbing a used wet tea bag over the paper. The tea dye made the wrinkles in the paper dye darker and makes my white computer paper look a little more like parchment. After the paper dried I decoupaged it to the metal sign. The decoupage also helps protect the paper from the elements.

Unfortunately, at the time I didn’t have a clue as to how to make grave markers to fill up our goofy pirate cometary so we bought them at a Halloween store. (There are a lot more headstones with goofy sayings in our yard than pictured in this post.) Husband and I plan to reuse the store bought headstones until they fall apart. Or until the neighbor kids steal them. Whichever comes first.


However, when they wear out (or disapperate) I’ll use Cathy Filian’s easy tutorial on how to make gravestones. You can bet that I’ll be adding a “Here lies Fred. Bumped his head and now he’s dead” epitaph to any new tombstone that I make for the yard. I like my gravestones funny, not creepy. 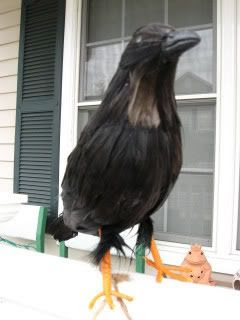 And what would a Halloween cemetery be without a Raven to watch over it all? Now you may think that we’d be cliché and name our Raven “Edgar”, “Poe”, or possibly “Nevermore”. Nope. Not us. Husband christened our Raven Poeboy. 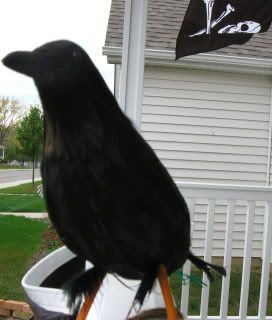 No matter which holiday you celebrate – be it Halloween, Celtic New Year, Samhain, Guy Fawkes Day, or the Day of the Dead I wish you, my fabulous readers, a very happy one!

LOVE the decorations! Everything looks fabulous!

Nice job! I wish I had your creativity. I'm sure the neighborhood kids will LOVE stopping at your house.

JD at I Do Things

I love your decorations, they are totally adorable!! Looks like you had a good time putting them all together!

Amanda - Yes, we had great fun putting everything together. Especially the wine bottles.

Know what you should do? Make a shoebox that looks like a grave and wear it. Then you can have "one foot in the grave!"

Your Raven looks much nicer than mine!

How clever you are - very unique display. Hope you have a Happy Halloween!

p.s. I've given you an award that you can pick up at http://blog.werelivingwell.com

Wow, seriously great decorations. Yours would be the house my kids would make me slow down as we passed in the car, and the first place they'd want to trick or treat. LOL. Looks fabulous! :)

What great decorations! Love the Raven and the story.

Haha love the decorations. I wish we had a place to do that. It looks like fun. :o)

your decorations are lovely! I go to the Ohio Ren. Festival every year!

& the buffy grave is amazing, I might steal your idea!