Help Me Pick a Halloween Costume!

I love dressing up for Halloween. It's the one time of year that I can please my inner child and play dress up. Because if you're an adult and if you don't have a kid, playing dress up at any other time of the year could be all shades of creepy, scary, fetishy or all three (your choice - you pick!)

Husband and I are going to a Halloween party. The theme is Scary. After rooting around what costume pieces we had around the house (not only a budget conscious costume but environmentally friendly too), I put together three options. I'm not sure which one I should do. Will you help me decide?

These costume pieces have evolved into what you see now. Originally I bought the vest at Rag O Rama (hands down the best thrift store in the city!) and wore it with black boots and leggings for a couple of sword fighting shows. Later I needed an Elizabethan gown to do a hand to hand stage combat show and made the black skirt. A few years later I developed an on-line training course and needed a photo of an 1898 woman. I added sleeves to the vest and a walking bustle to the skirt. Then after seeing Wicked and channeling the latest Harry Potter film I added the conical hat. It’s not as good as Professor McGonagall’s (oh how I love the hats they built for the character in the Harry Potter movies!) but I didn't have to time to beef up the store bought hat with feathers et al. at the time) and was a witch. I use the broom as a decoration on my front porch. I like the texture of the bamboo handle and that it's beat up a bit. Like it's defied gravity and flown many, many miles into the night.


Come to think of it, if I make a few slight modifications to my witch costume, I could trick it out as Steampunk.

Option 2: An Apple with a Razor Blade in It 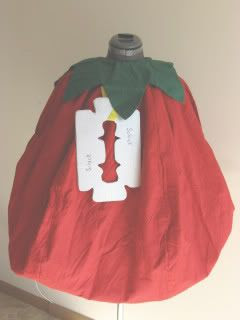 I made this costume for Husband a zillion years ago for a Halloween party (not the same hosts as this year) at his request. The theme of that party was Halloween. Not very original as themes go, so Husband decided to go as something that every person fears on Halloween other than zombies coming to life and eating your brain.
It was a hit becuase the attendees that party have a twisted sense of humor too.

I think this one is scary in a twisted kind of way however someone might find it offensive. I don't want to do that especially since this party is going to be full of Husband's co-workers. All of them have good senses of humor but you never know. 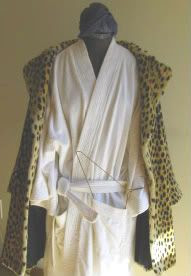 I've had this idea tucked into the back of my mind for quite awhile and haven't had an occasion to use it. I'm leaning towards this one because it's a new costume idea. And what I ask you what was scarier than the "NO WIRE HANGERS" scene in the movie Mommie Dearest?

Honestly this has to be the most comfortable costume around because I'd be wearing a bathrobe, nightgown, and turban - no need to do my hair! And with my amazing eBay find wrapped around my shoulders my inner diva would be happy.

And as my gays are ready to point out - a happy diva makes a darn fine sour apple martini. I'm just sayin'...

Which of these costumes do you think I should use for the Halloween party? Or do you have another suggestion for me?

Upadated 10/31/08: Thank you to everyone who suggested what I should be for Halloween! Your suggestions (and my loyalties) made me decide to dress up as the Witch tonight when we hand out candy for Begger's Nights. After Trick or Treat is over, I'm going to change into the Mommie Dearest costume and wear that to the Halloween party.

Ok... I haven't seen Mommy Dearest, so that one was lost on me. Sorry!

Of the other two, I like the witch one. Especially if you go all out and paint your face green. Or just add a huge, hairy wart. Eww!

I'll need to see mommy dearest, im going to put that on my netflix. I love the witch and love harry potter.

OMG- You have to do Mommie Dearest! That's a great costume. I might steal it.

My vote is for mommie dearest! My goodness, you have nailed it! :)

i vote for the witch. i havent seen mommy dearest either but i want to.

but i'd probably go for the slick witch costume. :)

Well, I have a very twisted sense of humor so of course I am leaning towards the apple with the razor blade.lol I do remember watching mommy dearest as a kid. That would be a great costume as well if you think everyone at the party will get it.

Thankyou for your comment over at my house ... how lovely of you! BTW - go the apple costume and post some photos ... oh how I wish Halloween would take off in Australia so I could pull off an apple costume as daywear!

My vote for witch Halloween costume..! Would be great for Halloween.

Mommie Dearest, for sure. Maybe use the chopping roses scene with thorn cuts all over?

I have not seen Mommy Dearest but if everyone likes it go with it, otherwise I like the witch. Only thing is if the theme is scary then there might be a lot of witches there. Mommy Dearest would be unique. Have fun!

It's nice to see the black skirt and vest again. :)

To choose which one, who is hosting the party? Depending on who the party is hosted by and who will be there will determine if you should be the witch or mommy dearest.

I want pictures of the "Mommie Dearest" makeup. Be sure to apply your eyebrow pencil with a trowel. And have fun!

JD at I Do Things

JD - Sadly, we didn't take photos. But yes, I did have high dark arched eyebrows that I made with a black eyebrow pencil and a light dose of white pancake makeup to simulate Mommie's cold cream. I topped it off with very red lip stick and nail polish. It must have worked because I won the party's costume contest!