Last week I logged onto the 3 Green Angels #ecowed back to school Twitter party. The subject of BPA free water bottles came up. So did Sigg’s announcement that the linings of their aluminum reusable water bottles made before August 2008 have a lining that contains bisphenol A (BPA). There were a lot of upset green moms who own Sigg water bottles that evening.

So what’s the big deal?

Aluminum bottles and cans must be coated with some sort of epoxy liner in order to be food safe. Some of these liners can contain BPA.

Prior to August 2009 (as in just a few weeks ago) when customers have asked Sigg if the liners in their aluminum water bottles contained BPA, Sigg danced around the issue saying that they couldn’t give specifics because their liner formula is top secret and proprietary. What Sigg would say is that their pre-August 2008 Sigg bottle liners were tested by a third party and did not leach BPA. To make current matters worse, according to The Daily Green , “It's been known for a while now that SIGG goes after any consumer group (EWG, OCA etc.) that infers their "proprietary" liner content contains BPA.“

Hmmm…so I guess that means the liners are OK, right? Wrong.

Once Sigg started producing and marketing water bottles using the new EcoCare BPA free liner in August 2008, their CEO wrote in a letter on the Sigg Website dated August 2009,“Prior to its transition, SIGG utilized a water-based epoxy liner which contained a trace amount of BPA.”

Trace amount doesn’t sound like much. It could be a little, it could be way too much. We don’t know. The old liner formula is proprietary and Sigg said they can’t reveal its contents, remember?

If you are one of those people who bought an expensive Sigg bottle thinking that since Sigg assured you, their customer, that their bottles have a leach free liner and led you to believe that it has a BPA free water bottle; I can see why Sigg customers might be feeling a little deceived right now. Or maybe you’re only feeling a trace amount of deception? Especially when it’s still possible to purchase a new Sigg bottle with the old liner. 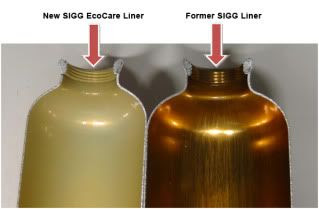 Photo courtesy of Sigg
4 BPA Free Water Bottle Alternatives
If you want to avoid this whole mess altogether – what do you do? Are there any BPA free alternatives out there? Yes there are, try these:

1. Water glass. A glass works just as well as a water bottle if you’re hanging out at home or working at a desk in an office. In fact, I have one right now on my desk, as I type.
2. Stainless Steel water bottle. Stainless steel water bottles do not need a liner. Double check the label or tag on the bottle to verify that the bottle is made from stainless steel before you buy it. Personally this is what I use to avoid dealing with aluminum bottles and their liners.
3. BPA free plastic water bottle. Again, don’t assume that since it’s a new plastic bottle for sale that it doesn’t contain BPA. Check that the label specifically says that the plastic is BPA free or look for a recycling symbol on the bottle. The safer BPA free choices for food and beverages are #2 HDPE (high density polyethylene) and #5 PP (polypropylene.) I also use BPA free plastic water bottles for sports when appropriate, for example when I go cycling.
4. Glass water bottle. You can buy a reusable glass water bottle or do it on the cheap by washing out and reusing a glass juice bottle with a screw on cap. Being a klutz I balked at this idea until I realized how many glass jars and bottles I already use and drink out of regularly (jelly, salsa, juice, beer, wine, etc.) without breakage or incident.

I think the only nice thing to do is give all the owners of old SIGG bottles in question, a brand new certified BPA-FREE bottle at no cost. Sigg charges enough moey for their products that they an well afford to replace any bottle in question.

If I owned a Sigg, I would send it back to them and tell them to drink out of it...then go and purchase a new, different brand bottle that is certified as BPA-free.

Thanks for the info on SIGG - I'm so disappointed in the news, although not surprised. I appreciate all of your fantastic suggestions for aluminum bottle alternatives!

I am going to be switching to those glass juice containers myself (being the frugal type) and I also want something that will freeze well without expanding the container - SIGG doesn't work for this and it's spout is too small for my ice cubes.

I never got around to purchasing a Sigg bottle and am glad I didn't after this. I would be pretty pissed off. I went shopping for a bottle and coffee mug a year or so ago and ended up with a stainless steel coffee mug I love and never found a bottle I could be sure what it was lined/made with. My husband did end up buying a metal thermos and I'm not sure if it is aluminum or stainless, I am going to have to check when he gets home tonight.

I ended up at a party and they had glass bottles of Voss water that were slim and I took a few home and use those now. They work great, I have two sizes, both about the same width but one is much taller than the other, I was a bit worried about dropping them and breaking them but I have only dropped one once and it is thick glass so it didn't break and I work at a place with pretty soft linoleum floors so that definitely helped.

One more reason to love Muggsly! I have three steel water bottles, 1 Nalgene one, and being towo of my steel water bottles were freebies- one from my employer, one given at a fair- I am sure theirepoxy coating is probably full of BPA and since the one my employer gave me, made in China, I wouldn't be surprised to learn it is full of formaldahyde- oh wait that isn't a pet water bottle!

I agree. Sigg did the product liner switch a year ago and didn't publicize it.Which from the blogs and comments I've read, has customers feeling like Sigg pulled another sneaky on them. In the CEO's letter he claims they put sent out press releases and blamed the media for not picking up the story and making it known. As a former PR/Marketing person, that that doesn't smell right. There are ways to release info to get your message out there and there are ways to release info so you can say that you did it but bury your message so the media doesn't pick it up. Judging how the Green community is reacting to the story once it was publicized by the Green Angels Twitter party and publicizing it (including me on my blog) it seems like the info may have been released but buried.

Yes - actually, when my wife and I were starting our environmental products company late last year, we looked at all the products on the market and decided against making aluminum bottles for this very reason. While at the time (October 2008) we didn't know about the BPA scandal in SIGG bottles, it was evident to us that an 'epoxy resin' was likely to leach other bad stuff, BPA or not.

So we went stainless steel (www.fillyourown.ca). It meant more work in terms of getting the product the way we liked it, but since our daughter (5) uses it every day, we wanted to go with the healthiest possible option.

Today it's BPA, who knows what chemicals we'll be reading about tomorrow leaching from these new plastic liners and containers...