Decorate Your Pumpkins with Stencils!

Husband wanted to carve pumpkins this year for Halloween. Intricate carving with stencils kind of pumpkins like the Bruce Campbell/Evil Dead pumpkin our friend carved last Halloween. I wasn’t surprised. He's been talking about  it off and on ever since he snatched up a pumpkin carving kit on super duper mega sale last year after Halloween.

Can you believe we got these little beauties for $1.99 each?! First we went to the North Market for pumpkins. They only had one and it was a little bigger than a softball so we passed. Then we trucked over to Aldi to grab milk and saw what was left of the Halloween pumpkins for sale. They were the right size and on sale for $1.99. Yes please.

Chances ae the pumpkins were so cheap because they were a little dirty and the backsides are a little mottled but some water, dish soap, and a few squirts of vinegar from a spary bottle took care of the dirt. Using the front side of the pumpkin dealt with the mottling. 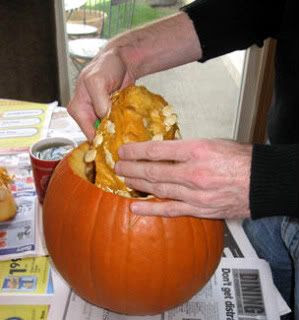 Husband plunged a knife into his pumpkin and scooped out its brains!

We saved the seeds for roasting and the stringy pumpkin goo. Husband says the goo is what you’re supposed to use for cooking. I think it’s the rind. Does anyone know for certain? 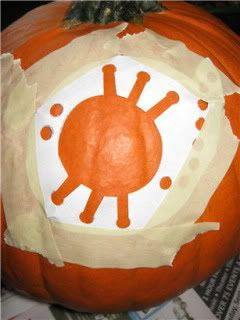 I got my spider stencil off the internet and printed it out on the backside of some junk mail. 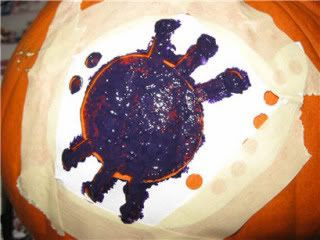 I used the stencil to paint my pumpkin because Husband said he can’t trust me with knives (he’s right.) Well that and I wanted to keep at least one pumpkin intact to use for food after the holiday.

Also I can’t draw worth squat without a computer. Hence, the stencil. 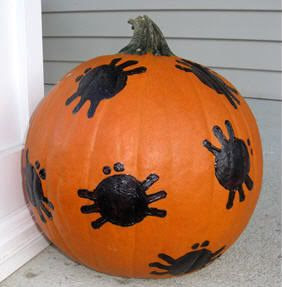 As you can see, I choose to paint my pumpkin in the style of a 5 year old child with no arms and no legs. When I told Husband my plans he shouted, “Like Matisse!” Goofball.

If you’re thinking “Hey that looks a little like the bug that’s on the Method bottle!” you wouldn’t be wrong. I had to use their stencil so I could enter my pumpkin in Method's pumpkin carving contest. The winner gets cleaning supplies. I figure after this little adventure I'll need a slew of cleaning supplies to clean up the leftover pumpkin chunks and goo.Wish me luck!

Husband carved his pumpkin following the lines of a stencil that came in the kit. I think his came out much better than mine. 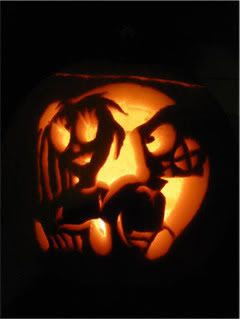 You can bet these little beauties will grace our porch on Beggar’s Night.

Condo Blues is a very coool!!! You can to say me, in a first, you carving this pumpkin and then you cut stencils??? How you make it!!!! Say me please...

You can use the seeds for roasting, toss the goo(compost). It is not used for cooking (at least pie anyway!). The rind is used for pie. And if you want to make a pie. it's better to use pie pumpkins - they aren't as watery.

Here's My pumpkin Pie if u want to see some pie making pictures ;-).

Erika Jean is correct. Cut pumpkin into large pieces and place on a baking sheet. Bake about 45 minutes or until pumpkin is soft. Let cool until you can comfortably handle it. If you want to go ahead and used non-pie pumpkins it works- just remember to drain them after puree-ing them but wrapping cheescloth and suspending them over a pot or bowl over night. 2 cups of pumpkin puree is about 1 can!

wow, yours is adorable and hubs is amazing! I'm much better off with paint as well.

Any idea what brand those straws were, by the way? Thanks for the tip!

Oh wow. Is it really a pumpkin? I can't believe this. Its looking very very beautiful Thanks a lot for sharing such a nice art.

Cute pumpkins and I love the decorating with the stencils. Stumbled for you too. Happy Halloween!

I like both of them actually - The stenciled one will obviously last MUCH longer than the carved one :) Your husband did a great job on the carving. Even with a guide, I have trouble with the carving of pumpkins.

I've never heard of using the goo for anything, but the meat on the rind is what I use for pies and breads - and it freezes pretty well too if you bake it and cube it first.

I love the little spiders!! :)

Great idea!! Love it! I'm hosting a Fabulous Fall party over at Not So Simple Housewife and I'd love for you to link this up! We are celebrating Fall and giving me and everybody else some great inspiration. We are looking for crafts, decor, food, and more! I'd love for you to add this and any other fall posts you may have!