I was shopping at Joann’s for fabric for Christmas gifts. I found myself in the button section, not that I needed new buttons for my project; I planned on reusing some buttons from my grandmother’s button box because of course using what you already have is the greenest practice of all.

Well, that, and I have a ton of buttons in that box. They have sat largely unused because while I was in a costume sewing frenzy during our Renaissance festival performing years, I couldn’t use those buttons because they were plastic*. 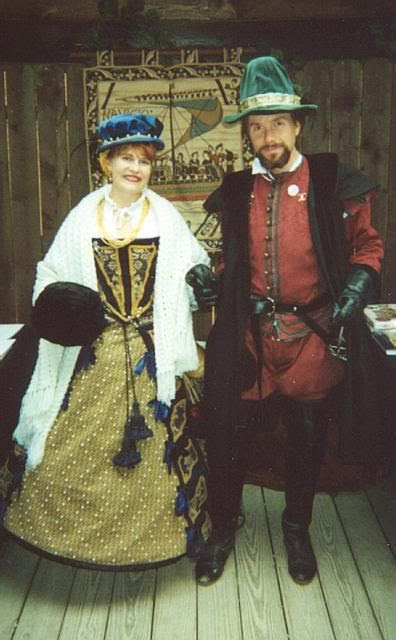 Yes, I designed, drafted patterns for most, and made everything from the skin out and hats on down for Husband and I with the except of the shawl (a gift from Mother-in-Law) and the vintage muff.

What few buttons they used back in those days, were either metal or wood. Which I might add, are becoming more difficult to find in a regular fabric store because they are replacing metal buttons with cheap plastic buttons that look like metal for 2 seconds until you wear the garment and scrape the metal paint off of the plastic button or worse, snap a piece off the plastic button (stage combat is very tough on clothes, BTW. I know from experience.)

So as a matter of habit, I hit the button aisle just to see if they have any cool metal buttons. Even when I don’t need buttons because I’m a sucker for notions I guess.

Well, look what I found! La Mode introduced a line of buttons made from recycled materials. I snapped a few photos with my Blackberry to show you. 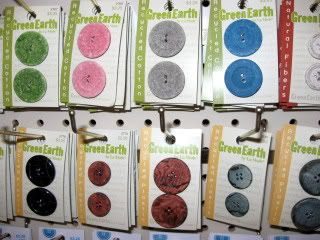 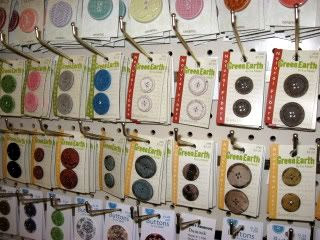 The buttons with the red labels are made from natural fibers, although they don’t mention what specific fiber they use. 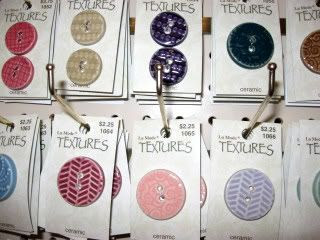 These buttons are ceramic and could be another option for you if you don’t want to use plastic buttons in your projects.

All of these buttons are still too modern looking for an Elizabethan costume project, but they might be a nice touch if you’re making a something with organic fibers and want to keep the entire project, right down to the buttons, as green as possible.

What do you think?


*Yes, I realized that makes me sound a lot like Beth of Fake Plastic Fish . Darn you Beth! Stop being such an influence on me girlfriend and making me be more aware my plastic consumption! Eeeeep! Did you enjoy this post? Get more like it by subscribing to the Condo Blues RSS Feed or to Condo Blues by Email.
Lisa Nelsen-Woods at 11/27/2009 08:00:00 AM
Share

I an afraid that Beth is an infkuence on me as well. A whole lot of us I suspect

I wish we could get those buttons in the UK! Buuuttttoooonnnss! :)

But, to address the buttons. They're cute! Cute as a button...? (buh dum buh ching!)

I know nothing about buttons or sewing or costumes, but I save the little bags with the extra buttons from my clothing and keep them in a little baby food jar. Which has absolutely nothing to do with recycled buttons lol But it's all I know about buttons. :)

Morgan - We performed there for 7 years. That's where we met. The photo in the post is from our last two years when we played the Lord Mayor and Lady Mayoress of the fictional village.

Excellent post, this helps enhance one's creativity. Mine in particular.

Anonymous said...
This comment has been removed by a blog administrator.
December 7, 2009 at 7:04 AM

Lisa, you look so beautiful in this picture!!! :) How talented you are!

Good luck with the cheapie...just nominated you!

Great blog. Read your post on recycled buttons and would love to buy some.

Do you know who to contact/where to find them/buy online etc?

Thank you for your help.