Last year I read an article in the New York Times Style section where the writer boo hoo’ed that because the economy was tanking they had to skip throwing a swanky expensive Christmas party and ended up doing something at home. They were surprised that their downsized party was more fun than the lavish ones of their past, predicted it a huge trend (because of course they just created such a thing), and oh by-the-way it’s a little greener way to go.

Well I suppose that makes my very Midwestern friends Alex and Anne trendsetters! They are way ahead of their time because they’ve been throwing this kind of Christmas party for years. It’s one of the best parties I attend and I’ve been to some swank holiday parties let me tell you.

Funny thing is, if you met Alex and Anne, you wouldn’t say that they were trendsetters at all. They don’t wear trendy clothes or drive sports cars or even a Prius. Their traditional Christmas party also flies in the face of any green cynic who says that Christmas, and parties, and gifting are a wasteful, unthoughtful, consumer-ridden humbug that we should just remove from our yurts completely. Because they are the type of people who, like most of my friends, emphasize people and fun. Although our idea of fun is usually a little kookier than most.

The Party, the Details, the Fun!

The Food: The food couldn’t be easier it’s potluck. Many of us are foodies. Some are vegetarians, some aren’t. Some drink. Some don’t. Dietary restrictions aren’t a problem because if you have ‘em you bring a dish that fits. Don’t’ have time to cook? No problem. Just come. Eat. Then eat some more.

The Dishes: Reusable and quite festive. Anne has a nice on-going collection of Christmas dishes and loves the chance to use them. And now BPA free sippy cups! Whoo!

The Decorations: They reuse them from year to year, which makes me question those who find the decoration part of the holidays wasteful. I guess they think that everyone buys all new and then throws them all out each year? I don’t. Do you? Heck, even most major businesses and department stores reuse or revamp or rent their holiday décor from year to year. Some even donate it to be sold for charity. So that part of the green grinchiness I don’t get with the exception of people who dump so many lights on their house that it can be seen from space. That excessive use of electricity I get as being considered wasteful. The other? Not so much.

The Clothes: Leave the ball gown and stilettos at home. Dress is festive but comfortable. Alex and Anne are big gamers, and have almost every board game known to man. In the pre-kid days, the evening ended with board games way into the night. Now that there are kids on the scene, the party ends earlier.

The (Infamous) Gift Exchange: Yes, there is a gift exchange. But the emphasis really isn’t on the gifts themselves but on the fun involved with the exchange.

1. It’s a white elephant gift exchange. You are absolutely NOT allowed to buy anything to put in this gift exchange. It MUST be something that you have in your own home. 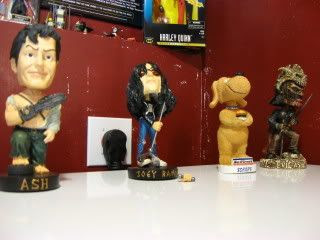 We gave the dog bobble head away and came back to us following year!

2. Gift wrapping has evolved to into a celebrated fake out system. In other words, you get props for wrapping the most useless item in the most attractive and desirable manner.

3. You may swap, steal, or exchange an item. This is the best part! Again the fun isn’t trying to get the “best” gift (because there usually isn’t and that’s the point.) The fun is in Alex’s complex rules about exchanges, steals, and swaps. His systems are mind-blowingly elaborate and completely different from one year to the next. They are so complex that someone (usually me) offers to diagram them in flowchart form because no one remembers them except Alex.


I think the best way to describe this Christmas party is whenever I’m there it feels like a warm friendly hug. With cookies (hopefully Candy Cane Trader Joe Joes the best transfat free cookie on the planet!**) Isn’t that what the holidays are really all about?


This post is part of the Green Moms Carnival hosted by The Green Phone Booth on December 7th where our topic is Greener Traditions.

**Hey FTC I don't know if you consider this a review or endorsement or not because Trader Joe's didn't pay me or even give me free cookies. Alex did. I made fun of him serving store bought cookies next to Anne's homemade cookies at last year's Christmas party. Then he told me to try one and I fell in love. Husband and I snarfed boxes of Candy Cane Trader Joe Joes last season. I tweeted their vitrues and did a little dance in the store (no lie) when I saw them for sale at Trader Joe's this year. The cashiers smiled politely like you do when you don't want to anger a crazy person and packed my groceries as quickly as they could in my reusable shopping bag to get me out of the store. That's all I have to disclose about that.

I love that the bobble dog came back to you. That is such Karma.

Sounds like a great party. A few years back, our family dropped the fancy, individual gifts for white elephants. SO much more fun!

My extended family used to have a preserved frog that circulated as a gift from year to year. It was funny every year to see who ended up with it.

This type of party sounds like a lot of fun.

Your Christmas party sounds like the Thanksgiving gathering I attended this year, complete with board games and potluck food. Since I'm gluten-free these days, I love potlucks because I can bring my own food without being rude!

I have always wanted to go to a Christmas party where they did a white elephant gift exchange. It always seemed like so much fun. This party you described sounds lovely. You are very fortunate.

We've hosted a Christmas Eve bash every year but one for the past 20 years. I got cloth napkins at the dollar store; I bought beautiful reusable buffet plates on sale years ago and have been using them ever since. We borrow my neighbor's stash of party glasses, and we use a motley but perfectly usable collection of silverware instead of plastic. Everyone brings food and something to drink. One of my neighbors even helps do the dishes. I can't imagine a better way to have a party!

White elephant parties are the BEST!! Our group of good friends has done them in the past but this year we are doing a book exchange party.
And Lisa - you've now got me HOOKED on those candy cane Joe Joes!

Those are the best kinds of parties! We enjoy just going to our favorite Italian restaurant (North Lounge) and hang out in the bar area with friends. We do this year around but hope to have a "Christmas party" there as well. We have become friends with the manager and bartenders (so much so that we got invited to the managers wedding haha and we give them Christmas cards).

We are all very low key people and just have a fun time laughing for many hours and closing down the bar (normally there more than an hour after they close hehe).

I think potlucks and BYO are the hostess answer to party throwing, just clean house and wait for all the goodies to arrive - plus often the leftovers stay and you have dinner for a week!!