A Bleach Free Way to Kill Bathroom Mold and Mildew

My new house came with a brand new shower and bathroom exhaust fan. Pristine white without any sign of mold, mildew, or ick in sight. Even after dutifully running the bathroom exhaust fan before, during, and after using the shower, mold and mildew began to form. Ew! Ick! Ick!

I didn’t want to use chlorine bleach to kill the mold and mildew as some folks recommended. I’m really not a fan because chlorine bleaches are hazardous if they are ingested or inhaled. Not to mention I have a curious little doggie running around the house; I don’t want him to get into that stuff either. 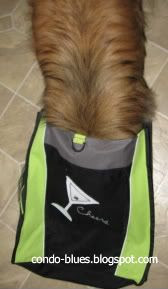 I tried to kill bathroom mold and mildew by scrubbing the grout with:

1. A squirt of straight vinegar and giving it a scrub with an old toothbrush.
2. Covering the stains with a paste of water and oxygen bleach (much safer because oxygen bleach is made with hydrogen peroxide), let it sit for awhile, and rinsed it away with water.

Both methods removed the bathroom mold and mildew but it came back quickly. The final straw was the day I dried my hands on the fresh hand towel I put in the bathroom the day before during another daily heavy duty cleaning session. It already smelled like a locker room. I threw my head and hands up in frustration and screamed, “Whyyyyyyy!”

Then I found the culprit. 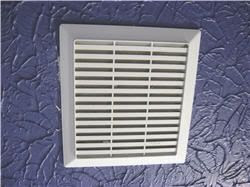 Please ignore the dust on the fan. Thank you.
My bathroom exhaust vent fan.

Building codes require every bathroom to have some form of ventilation, either a window or an exhaust vent fan. As long as you have either one or both it meets the building code.

What the building code doesn’t stipulate is how well that window or an exhaust fan works to ventilate the room. And that my friends is my problem. My bathroom exhaust fan was too small the remove all of the moisture from the bathroom. The excess moisture and warm air was the perfect breeding ground for mold and mildew to grow in the bathroom.

How to Test a Bathroom Exhaust Fan

You can do a crude fan power test by turning on the bathroom exhaust fan, holding a tissue above your head, and letting go of the tissue. If the fan sucks the tissue to the fan – congratulations you have the correct size and strength fan exhaust vent fan for your bathroom! If not, it’s time to replace your fan with a more powerful model.

Time to replace the ceiling fan.

How to Buy the Correct Size Bathroom Exhaust Vent Fan

To determine the size and power of the exhaust fan I needed for my master bathroom, I turned to my favorite DIY book. According to Home Improvement 1-2-3, I need to buy a bathroom exhaust vent fan that’s rated at least 5 CFM (cubic feet per minute ) higher than the square footage of my bathroom.

I also wanted a less noisy fan which is measured in SONEs.  The lower the SONE rating, on a scale of 1 to 7, the quieter the fan.

Husband and I hopped on down to store to buy a replacement bathroom exhaust fan. Being one who is obsessed with saving electricity, my first choice was to buy an Energy Star rated fan. I was more than disappointed because every Energy Star rated bathroom exhaust fan the store had came with a lot of extra bells and whistles I didn’t need like ceiling lights and heat lamps. I would have loved the heat lamp feature, I had one in an old apartment and it was heaven, but I didn’t want to run the extra circuit and switch it required (as I got into the project this turned out to be a very good thing because the wiring space I was working with was tiny!)

Prevent Mold and Mildew by Installing an Exhaust Vent Fan

On the way home from the store Husband quizzed me on whether I could install the new fan myself since his running injury prevented him from helping me like he wanted to. I said it should be pretty easy because I can climb into the attic and replace the old exhaust vent fan with the new fan from above the ceiling (the preferred one person method) instead of from underneath the ceiling (the doable but pain in the butt more than one person method)

When will I learn to never, EVER say “easy” “simple” “no problem” when talking about a home improvement project?


*Enter The Condo Blues Whammy*
I climbed up into the attic and realized that I couldn’t get to the area above the master bathroom because of roofline and pitched ceiling in the bedroom. *sigh* I had to install the fan from underneath the ceiling - the doable but pain in the butt more than one person method.

But on the bright side, I confirmed how much insulation we had in the attic – bonus!


I decided to call in reinforcements – Father in Law. 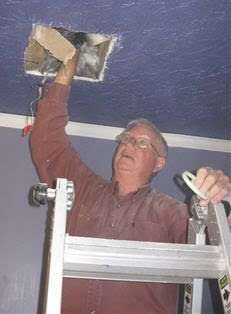 Everybody say hi to Father in Law!
And with Father in Law came his rotozip tool. It was so much easier to enlarge the hole in the ceiling with his electric rotozip than with my manual dry wall saw. 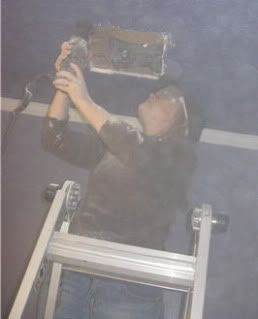 See all that drywall dust in the air? It was about this time when I realized that we should have worn dust masks.
Father in Law and I switched off tasks because my little hands came in handy when it came to reaching in from behind the fan and making some of the connections in the tight spaces. His big man hands came in handy when we had to coax (as in shove) the fan box into the hole in the ceiling. Thank goodness we both wore our glasses to help protect our eyes from tiny falling debris. 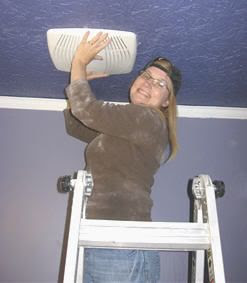 I got the honor of installing the fan cover after we made all of the connections.
Father in Law grabbed the camera and took a picture to commemorate the event. “You can put this on your blog!” he said excitedly.

Husband and I donated the old bathroom exhaust fan to the Habitat Restore.

This post is part of the Get the Junk Out! Carnival where the topic is antibacterial soap/bleach hosted by Kitchen Stewardship.
Lisa Nelsen-Woods at 3/23/2010 07:00:00 AM
Share

I love this post! Except you should be wearing safety gogglez (that's how my keyboard typed it! So rock star!) and dust masks.

However ... I didn't get a good bleach-free mildew-killing recipe from you. I don't even have a fan in my main-floor bath, and the one downstairs makes noise like an Apocalypse-Now helicopter. Sigh. Another project (or two) for the list.

CLM - You can't see it through the haze, but I'm wearing safety goggles when I used the rotozip tool.

Bleach free mildew killing recipe #1 - mix a paste of water and oxygen bleach and put it on the stain. Let it set for awhile to work it's magic, then rinse with water.

Bleach free mildew killing recipe #2 - Spray vinegar from the bottle on the stain and scrub with an old toothbrush.

Bleach free mildew killing recipe #3 - improve the ventilation in the room to remove the warm moist air which is the perfect breeding ground for mold and mildew.

This is AWESOME - what a great tip with the tissue! I'm going to go check my fan right now - we have mold issues, too. Thanks!

Thankfully the fans in our bathrooms work effectively, but they didn't, you gave such a great tutorial, that I may have been temped to install one!

We have some mildew/mold problems along the caulk in our shower. Unfortunately our bathroom vent only vents into the attic and not outside and I would rather not have the moisture in our attic so we don't use our fan much. Maybe when we replace the roof someday we will fix that.

What a great post! It's fun to see a photo of you, too. My bathroom doesn't even have an exhaust fan, how 'bout that for a problem? I need to do that oxygen bleach thing on my kitchen counter grout - double triple ewwwwww!
Thanks for linking up - I stumbled ya!
:) Katie

You can use a paste made out of baking soda and lemon juice, let it sit about 10 minutes then rinse with vinegar water to get rid of all bathroom smell

This will be really useful, especially with the winter coming. Thank you for sharing at The Really Crafty Link Party.