What Do You Do with St Patrick’s Day Plastic Beads?

For St. Patrick’s Day Husband surprised me with a six pack of a traditional Irish drink – Guinness. Husband knows I like a beer that drinks like a meal. 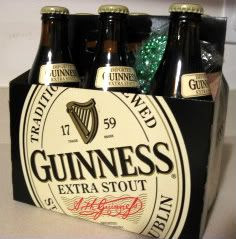 There was a little green doodad in the six pack carton. It was a green Mardi Gras bead necklace Guinness put in as a St. Patrick’s Day gift with purchase.

Unlike the carton and bottles, the plastic bead necklace is one of the few things we can’t recycle around here when we’re finished with it. Hmm? What do it with it?

I suppose I could complain that this fun one day necklace is cheap plastic crap that’s a poison to our world but I’ll leave that to other folks. I like to offer solutions to these little problems, not complaints.

If we lived in New Orleans, I could turn the bead necklaces in for recycling. Arc of Greater New Orleans sorts, repackages, and resells the recycled beads to local kewes for the next year’s Mardi Gras parade. Very cool NOLA.

If I were Rob’s World, I’d get my craft on and make a melted bead lamp shade, or decorate a picture frame with Mardi Gras beads. How cute!

But before I make a lampshade, I need a lamp to put it on. I’m on the hunt for all things lighting and this idea for a beaded chandelier caught my eye. I think it would be cute in a little girl’s room. If I had more beaded necklaces, I could easily make this lamp. 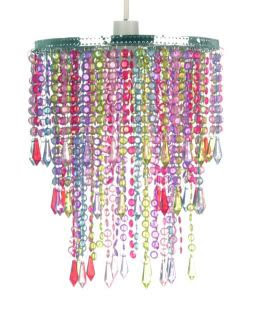 Photo courtesy of Girl Shop
Other than that, I suggested putting the St. Patrick’s Day Mardi Gras beads in our prop box and wearing them as part of a future Halloween costume. Husband suggested I use the Mardi Gras beads to make the costume, specifically this beaded Mardi Bra. He wants me to wear one to the summer Irish festival. 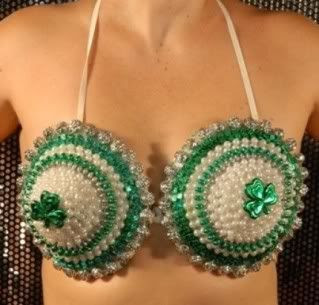 Photo courtesy of Mardi Bra
Him first. And only if he wears it with his kilt.

Blitzkrieg had his own idea. Before I knew it, he slung those beads around his neck and rocked a new look. 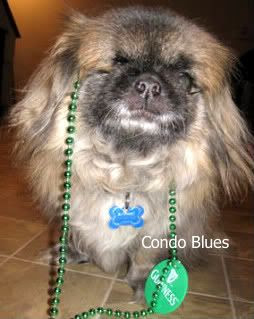 Oh yeah. I'm rockin' it.
Party boy Blitzkrieg wins in this round of creative reuse!

Save them for next year, or give them to the neighbor kid!

I must ask (I must I must) What did you do to earn those beads???

Rob - Sorry to disappoint, I don't have a tale of debauchery. We just bought some beer at the store. We drank a bottle each and I made bread with some too. Whoo - I lead the wild life :)