I’ve been dealing with an itchy flaking scalp for the last six months and tag teaming the problem with my hairstylist and my family doctor. Two shampoos and a new prescription later both suggested I add more Omega 3’s to my diet. Translation: eat more fish.

I settled in on shrimp because it is most of the affordable (AKA frozen) type of fish I can get in land locked Columbus that is environmentally OK.  That and I really like to eat shrimp. Cooking shrimp is a slightly different story because it’s easy to overcook. I’m not a fan of stir fried rubbery shrimp bits. I did some poking around the internet and found a recipe for coconut shrimp. Husband is a big fan of all things coconut. However I’m not a fan of the mess involved with hand breading things.

So I cheated. I bought SeaPak Coconut Shrimp.  I wanted to do something a little different and took a recipe suggestion off of the SeaPak site to serve it with Thai peanut dipping sauce instead of using the marmalade dipping sauce that came with the shrimp. I put the marmalade sauce aside and will get clever with that later.

To prove that I’m not completely useless in the kitchen I made a Thai peanut dipping sauce  with natural peanut butter instead of buying a premade sauce. I served the coconut shrimp with brown rice and steamed broccoli. The rice was the most difficult part of the meal because it has the longest cooking time, which really isn’t saying much because it only took 30 minutes. The shrimp took about 12 minutes to bake – let’s hear it for quick food!. 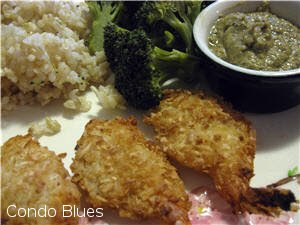 Pardon my plating. I don't know how food bloggers do it. I really just wanted to hurry up and eat dinner, not style photos.
The taste? Pretty darn good. Husband said, "It was light. It was crispy. It was yummy, even better with your dipping sauce."


This is definitely a you get what you pay for situation. The Kroger brand shrimp was slightly less money per shrimp but failed the taste test in comparison to the SeaPak Shrimp. The SeaPak shrimp are a better tasting product.

Disclosure: SeaPak provided me with a free sample to facilitate this review because I probably wouldn't have considered this product otherwise and now I'm glad they did. They did not compensate me in any way and all opinions are my own. SeaPak didn’t ask me to compare their product to a store brand. I did that on my own which I purchased with my own money if you were reading this post carefully.
Lisa Nelsen-Woods at 4/28/2010 08:00:00 AM
Share

Julia Child said Never apologize. Never apologize for serving store bought frozen shrimp. Geez- it's Columbus, for crying outloud. I would be very suspicious if your shrimp was fresh! And SeaPak is very good! But you did make the dipping sauce. That's more than I would do.

mmm this sounds good and something I could tackle! oh, I don't know how food bloggers do it either, I just want to dig in, too!