How to use a Rototiller

My in laws do a big garden every year. Husband says that they have had a garden for as long as he can remember.

Father in law had a heath situation. He is recovering and on physical restrictions for the rest of the year. (Since I did not ask if I could write about it, I am not going to mention the details, only to say things got scary and surgery was involved.) My in laws did not think they would put in a garden this year because Father in law should not till the garden bed with the rototiller. Husband is still recovering from his running injury, so he is out too.

While farming and country life is not for me because I am allergic to everything that is green (oh the irony!) it is Mother and Father in law’s Little Slice of Heaven. I will do everything I can to make sure that they keep it for as long as they want.

I volunteered to till their garden with this monster. 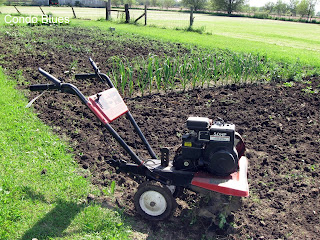 Told you the garden was big!

What I don’t have in rototiller knowledge, I make up for in enthusiasm.

I was very enthusiastic. 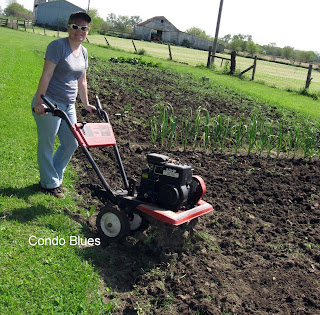 I took off my safety equipment for the photo.

Have I mentioned I have never actually used a rototiller before? But I have gardened with a jackjammer how hard could this be?

I needed help getting the big thing started because it has a pull cord like a lawn mower and I have arm muscles made out of macaroni. There are two hand controls on the rototiller I used one for forward and other is for reverse. Each control has a safety feature - if you let go of either control the rototiller stops so you are less likely to chop off your feet if the thing backs up into you too fast.

My plan was push it in front of me like a lawn mower and let the rotating blades churn up the soil. Then we could easily hand pick the weeds and Mother in law could start planting. 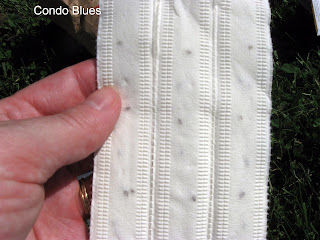 Mother in law called these carrot seeds imbedded in paper strips “stripper carrots.” Husband got mad because he thought I was using salty language in front of his Mom because she is a saint (she is.) They cost a little more than loose seeds, but you do not have to thin the plants out later like with planting loose carrot seeds. They are worth the extra money.

My plan worked well until the farmer who rents Mom and Dad’s fields for extra planting stopped by and watched as I tried to churn up the soil and avoid some volunteer lettuce, a row of growing garlic and rhubarb. The obstacle course made this Advanced Rototilling when I clearly was supposed to be in the Beginner’s Course. No pressure trying to learn how to use a tiller in front of a professional farmer!

A few things I learned: 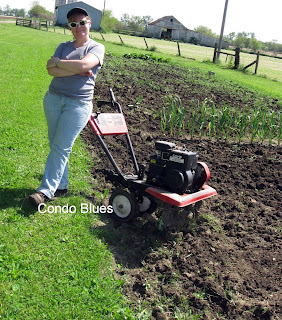 Why yes I AM pretty darn pleased with myself!

Mother in law rewarded my efforts with some rhubarb that I miraculously did not till under. 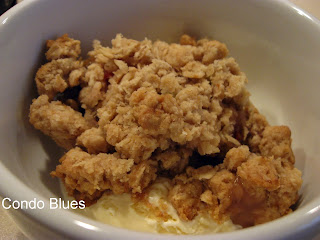 Rhubarb crumble hot from the oven and plopped on vanilla ice cream!

I used the rhubarb to make The Green Phone Booth’s Rhubarb Crumble. While it was baking Husband insisted that we serve it over vanilla ice cream and ran off to the store to buy Ohio made ice cream. He was right. The ice cream was the perfect compliment to a very delicious end. I love it when a plan comes together!

If you are joining us from Something I Whipped Up Monday, Metamorphosis Monday, The Persimmon Perch, Market Yourself Monday, Made By You Monday, Marketing Mondays, Craftastic Mondays,  Trash to Treasure Tuesday, Today's Creative Blog,  The Girl Creative, Toot Your Horn Tuesday, Second Time Around Tuesday , Show and Tell, Tools are for Women Too, Tip Me Tuesday, or  Penny Pinching Party Welcome!
Lisa Nelsen-Woods at 6/06/2010 08:10:00 AM
Share

Pat yourself on the back for taking this one on & for your on-the-mark tips. And I've never seen those seeds in paper strips before - very cool. Thanks for linking to Craftastic Monday!

WOW -- looks like a lot of work! great job! And that rhubarb crisp looks delish...

Thanks for stopping by my blog, too!

Rory from Tools Are For Women Too! said...

Good for you! We never learn how to do anything unless we give it a try! The "stripper carrots" crack me up! Thanks for sharing the fun on Modern Craftswoman Monday! Rory

Great job! rototilling is very hard work. I miss rhubarb. It's too hot in FL for rhubarb.