Husband and I spent a day at the Ohio State Fair. When we were not eating local food – which is crazy easy to do at the State Fair, we were checking out the sites and acting silly.

There were things to do for kids of all ages. Even goat kids! I thought of Nanny Goats in Panties and snapped a photo of the goat playground for Margaret. 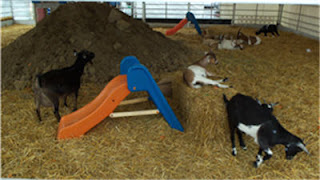 The goats weren’t feeling playful because it was early
in the morning when we visited them.
The animal, food, and craft judging were all in full swing. We saw and were allowed to pet many animals. Our favorite was the Highland cows. Husband and I call them McMoos because we are convinced that they moo with a Scottish accent. Mac-moooooo.

The cows were still small and they liked pets. I was so in awe of their cuteness and soft fur I forgot to take their picture.

Not all of the animals we met were as nice as the Highland cows. A Lego Lion ate Husband! 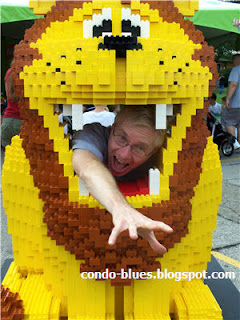 Yes, he is worse than a kid is and I love him for it.
Fortunately, a brave Lego Man rushed to Husband’s rescue. I showed my appreciation to my good Danish hero with a kiss. 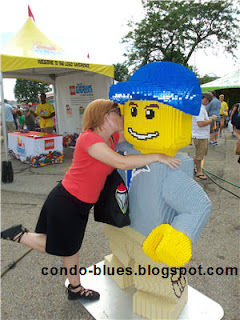 Yes, the Lego man is taller than I am.
I was pleasantly surprised with all of the eating local, recycling, and green living displays at the Fair this year. My biggest surprise came when I found out who is performing at the Fair this year. Every once and awhile the Fair gets lucky and books an up and coming act that hits it big after they are already contracted to play at the State Fair. However, more often than not, the concert acts are a former A list act that’s now doing a D List nostalgia tour on the state fair circut.

DEVO is playing the Ohio State Fair this year.


The alternative darling of the MTV of my youth.

A little bit of me died right then and there.

If I weren’t so stuffed from my local lamb lunch, I would have drowned my sorrows in more crazy fair food you only eat on a dare, like deep fried s’mores or egg on a stick. 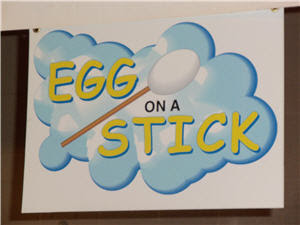 At least they are Ohio eggs. I have no Earthly
idea why they are an a stick.
Instead, we sought out kitsch because kitsch makes me happy. No one does kitsch better than the Ohio State Fair tradition of our famous Butter Cow! 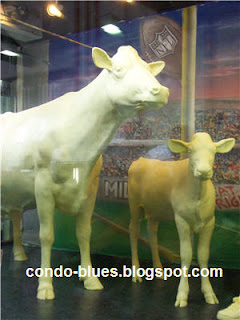 Butter cow and calf today, biodiesel tomorrow. My apologies for the
glare in the photo from the glass case.
After the State Fair closes, they donate the butter sculptures to a university where the students use them to make biodiesel.

This year the butter cow and calf shared their refrigerated home with two Cincinnati Bengals immortalized in butter. 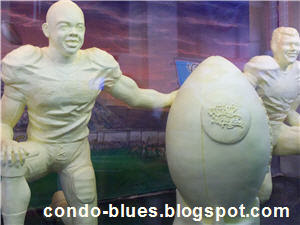 Let’s stick with calling them Butter Bengals instead of the
obvious butter finger wide reciever jokes.
Husband and I didn’t pick up much in way of free swag with the exception of a bucket made from 100% recycled plastic I got from a green energy booth. I took it because I wanted a larger bucket for compost scraps.

Blitzkrieg had a different idea. He turned my bucket into a Pekingese powered garbage disposal. 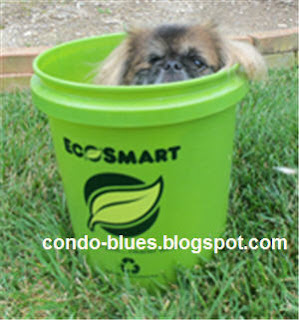 Please deposit food here. Thank you.
Blitzkrieg, your creative reuse idea for my swag is admirable. It doesn't fool me, but I give you full credit for trying.

I suppose that means I can enter this post in my Condo Blues Recycle Your Swag Link party on August 22, 2010. Thanks little buddy for helping me get the word out!

Do you have any crazy summer festival traditions where you live?

I must say in reviewing Ribfests like I do, and having tried Funnel Cakes, Bllomin' Onions and Deep fried Mars Bars, I have never heard of egg on a stick

Love that pic of your dog in the bucket!

I love the butter Bengals haha. We have our fairs in the fallish time. Our county one will be the end of this month and start of Sept. State is sometime after that.

Lisa - I thought of you when I saw the Butter Bengals. I told my husband I was taking the photo for you :)

hahaha I want to make a pose at the "Butter Bengals"!!

Oh Em Gee! I don't even know where to begin with this!

First of all, thank you for the linky love. I really appreciate that!

I can't get over the lego lion eating your husband and you smooching your legoman hero and the butter sculptures and the egg on a stick....what a horribly entertaining post! (and I mean that in a good way, even though I said "horribly")

NGIP - As I always say, when life gives you kitsch, make fun of it!