When it comes to electricity, we all want it. We all need it. We keep creating more and more items that use it to make our lives easier or more fun or more efficient. However, I can’t help but think where is all of that extra electricity we use going to come from?
As it is, there are cities, even whole states, that consistently use more electricity than they can generate on their own. Building new power plants of any type (using alternative or conventional means of making electricity) is difficult because while everyone wants to reap the benefits (including myself) no one wants a new power plant in their backyard because it can mess with property values.
For now, the best course of action may be to collectively use what electricity we have a little more wisely. This is difficult, even for me. I really don’t know how much electricity I’m using until long after I’ve used it - at the end of the month when I get my bill.
One method is for electric companies, like mine, American Electric Power (AEP) to use gridSMART   smart meter and grid technology to reduce electricity consumption and improve system wide delivery and performance. It would mean having a smart meter, a Programmable Communicating Thermostat, and eventually appliances with smart chips in your home. That way, you can check your use in real time on line, be billed for your use at a flexible billing rate, and make adjustments as you see fit. 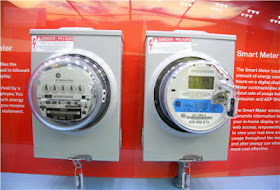 A conventional electric meter next to a digital smart meter
It sounds great! I also like that the gridSMART technology runs on auto pilot much like my current programmable thermostat. The only difference is that unlike my current programmable thermostat (which I learned that most people don’t use because programming them can be a pain) the Programmable Communicating Thermostat is easier to program. The Programmable Communicating Thermostat and smart chip appliances would also send information back to AEP about my use during peak use times such as sweltering summer days and allow AEP to lower my temperatures a notch to prevent a system overload or brown out.
That last part sounded a little Big Brother to Husband. Because as much as we like saving electricity and having a lower than normal electric bill, we hate people telling us what we have to do in our own home. Husband also wondered what prevents someone from reducing the refrigerator’s electrical use to the point it makes ice cream melt because they want to be mean.

I was invited to a blogger lunch and presentation sponsored by AEP, Mom Central Consulting , and Silver Spring  to discuss AEP’s gridSMART program and get some answers to Husband’s questions.
AEP’s new gridSMART pilot program will install new Smart Meter’s on customer’s homes (sadly not in my area of the city.) Unlike the current mechanical meters, digital Smart Meters have encrypted wireless two way communication between your house and the electric company so no one can mess with or access your information. Besides the flexible billing rates and allowing customers to set up an alert when you move to a higher energy pricing tier, the smart meter will automatically alert AEP when there is a blackout.
Under the current system, at least three homes have to call it in before AEP knows that there is trouble. That last part made me sit up and take notice, because as you all know Mother Nature likes to send me blackouts. They build character.

Opt In, Opt Out GridSMART Programs

All of those services get me excited but in the interest of checking things out thoroughly I had to ask about some of the things that gave Husband a Big Brother like vibe. Mainly:
·        “Offering consumers the option to receive a rebate in return for allowing AEP to send set back signals to a Programmable Communicating Thermostat during peak load conditions.
·        In the future you will be able to control the energy usage of the appliances in your home through chip connected to your home area network. “ AKA: Smart chip appliances.
Fortunately, under AEP’s gridSMART program these options are opt in only. You are given a financial incentive in the form of a rebate to have the AEP Programmable Communicating Thermostat installed but if you don’t want it, you don’t have to have it.
In addition, even if you have it installed and say, you’re having a houseful of relatives over on a crazy hot summer day, you can override the temperature if AEP wants to lower your thermostat a notch or two.  The same goes for the smart chip appliances – because who wants melty ice cream? Not me!
All changes need to be approved through the Public Utilities Commission (PUCO) before AEP rolls them out to their customers. So that lessens the chance that someone will be lowering your electrical use just to be spiteful to Not Going To Happen.
AEP Ohio is one of the first utilities to test this program. They tell me that gridSMART is the trend and something like it will eventually be coming to you. What do you think? Is it a money and energy saving tool or too intrusive?
Disclaimer: I wrote this post after attending an informational luncheon on behalf of Silver Spring Networks and Mom Central Consulting and received a gift bag and gift card as a thank you for taking the time to participate. This had no bearing on my opinions and all thoughts and opinions are my own. As you all well know, I can be highly opinionated.
Lisa Nelsen-Woods at 12/20/2010 08:51:00 AM
Share