March’s One Small Change is something I avoided forever – getting rid of my 14-year-old sweeper for a bagless HEPA filter model because the greenest and cheapest thing is to use what you already own, right?

My old Hoover upright uses bags. I can buy them for a dollar a package at Dollar Tree so the price of bags isn’t an issue. In a pinch, I can always open the top of the bag, dump the contents in the trash or compost bin, and staple the top of the bag closed so I can reuse it again. I learned this trick from the Tightwad Gazette.

The Condo Blues whammy dictates that if I run out of vacuum cleaner bags it is going to be when I am in the middle of cleaning the house.

With a Pekingese whose hobby is shedding, my trusty Roomba Red got the daily dog fur tumbleweeds and the upright came out every other day for the heavy cleaning. Roomba doesn’t use bags so I figure the waste thing was 50/50.

Not long ago, Roomba’s rechargeable battery heaved its last breath. Being one of the first Roombas, it is not as powerful as the current models but it did the job. (I like a clean house because I am my mother’s daughter. I like gadgets and tech because I am my father’s daughter. Super early adopter robot owner me.Yay robots who do your bidding!)

If it were a maid, I’d surely give Roomba a nice big Christmas bonus each year. Blitzkrieg, however, is not a fan of Roomba. He thinks it is a scout for the Great Robot Uprising. 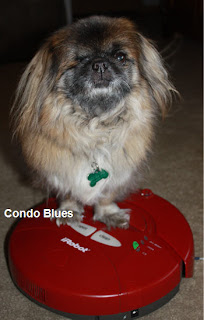 I have come not to praise Roomba but to bury him.

(any thoughts?), I noticed that without the extra robot help my Hoover wasn’t doing the job.

I cleaned the brushes. I changed the bag. The final straw was the day I noticed it took four or five passes to vacuum up the same spot of baking soda I sprinkled on the carpet to deodorize it. I checked in with my sister and she confirmed that sweeper technology has changed. It was time to get a new vacuum cleaner.

After some research, I decided to go bagless. I don’t have to worry about running out of bags or trying to reuse a bag, which is super messy. I was concerned that all of the super turbo dog hair models were much bigger than my Hoover and would wrench my arm out of the socket when I hefted them up the stairs (another reason I love Roomba so, it’s light.)

for my birthday. Yeah, it’s a super practical birthday gift but I couldn’t think of anything else that I wanted or needed at the time. I'm lame.

My new sweeper is super sucky! (In a good way.) I was both amazed and skeeved out at the amount of dog hair it sucked up after only two passes in my living room. I thought after constant vacuuming with my previous vacuums that I had a clean house. Not so much. Ugh.

Best of all, I don’t have the waste associated with vacuum bags anymore. Two of the three Hepa filters in my Bissell are washable, the third filter is supposed to be very long lasting.

I’m kind of kicking myself for waiting this long to buy a bagless vacuum cleaner.

Congrats on going bagless! You won't regret it.

Battery vs. replace all together is a tough call. I really like that Roomba, but on the other hand if your current one is still working except for the battery... How much is the replacement battery? I am pretty cheap, so if it is less than the new Roomba - which I am sure it is - I would probably just buy the battery.

Krista - a replacement battery is around $50. From the reviews I've read, the batteries for the earlier models don't last and have to be replaced sometimes yearly although the Roomba folks I talked to said they should last for several years. They were very surprised my original Roomba battery lasted longer than usual. The reviews on the battery they use on the new models have gotten very positive reviews. There's also the dog hair issue. I have a feeling that while I think Roomba Red does fine, if I upgrade to a more power pet model, I'll have a similar experience as I did when upgrading upright sweepers

It was very funny to read your post. I too just bought a bagless vacuum and I am in L-O-V-E!!!! It's a Eureka ( my other is still holding strong in my neices apartment after 21 years. really!)

I love seeing all the dirt and HAIR....my HAIR! and cat hair and dog fuzz....it cycled it up into a neat furry hairy dirt hat and went right into the trash.

julandmatt - The vacuum makes me happy. I probably need to get out more :)

Bagless vacuums rock. The only problem with mine is dumping the hopper--- All that dust and stuff rises up to greet me. So When I dump it- outside- I hold my breath. Good thing it dumps easy!
Rob
Proud owner of a Almost 10 year old Dirt Devil Bagless Vacuum

If the battery is only lasting one year, I would probably go ahead and get the new one.

I found a Shark Navigator on clearance for $99 because of a small hole in the box. When we got home, we vacuumed using our old vac and then the Shark. I was shocked at the junk it pulled from the carpet. What had we been walking on?!

Krista - That's how I felt with my new sweeper. I thought my carpets were clean but after it picked up so much dirt, I a little grossed out that we were walking around on all of that ick!