Last summer I made two compost bins fromRubbermaid tubs and violated the warranties on the tubs to do it 'cuz I'm Danger Girl. 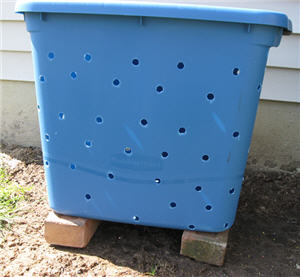 I threw in a shovelful of dirt in to prime the bins and diligently added a layer of shredded paper from our paper shredder to the bin for every layer of vegetable scraps that hit the bin.

Every once and awhile I locked the handles on the compost bin and turned it end over end to mix the contents. Since I use paper for my ‘browns’ everything stuck together and required breaking it up by poking at it with a shovel before I flipped the contents to mix it.
It’s a year later. Let’s see how my Compost Experiment is doing.

Yay!
This bin was filled a few inches from the top with food scraps and paper. You can see that it is breaking down and starting to look like dirt – which is what you want in compost. This bin still has a way to go but the results are as they should be.
WINNING!
Bin Number Two

*Pout*
I started this compost bin after Bin Number One was full. I followed the same dirt + food scraps + shredded paper procedure as Bin Number One. Bin Number Two looks just about the same as it did in November and before the whole thing froze during the winter and when we stopped adding matter to the bin.
Except.


That foamy stuff is my nemesis Dog Vomit Slime Mold. The same disgusting mass I found in the compost bin I made from a trash can.
EPIC FAIL
What Happened to My Compost?
I tried to play a little Will It Compost with Bin Number Two. I cut up and tossed in a plant based compostable sponge and a plant based plastic compostable bag in Bin Number Two. They froze during the winter instead of breaking down. With the insane amount of rain we had in April and May, I am sure the now thawed sponge bits kept the bin too moist. Sha-bam! Dog Vomit Slime Mold city.
I once again, live to serve as a warning to others.
All I can do is toss the contents of Bin Number Two, wash it out with oxygen bleach and water, and start again.
Bummer.


Has this ever happened to you? Do you have any compost tips for me?

SustainaMom's comment made me lol. Blitzkreig hasn't been pranking you has he? I'm a lazy composter - dig a hole in the garden, throw in some compostable stuff, cover it with enough dirt to keep the dogs out, check back later and it's usually composted.

I hate home composting. The day Raleigh gets city composting collection, I will weep for joy.

I think my compost bin (fashioned after yours) is also Dog Vomity... nothing's converting to dirt fast enough to use, too. Grrrrrrr.

Mary - I wish Blitzkrieg or the dogs next door pranked me. Sadly, no.

I'm trying to parlay this experience into upgrading to a Naturemill composter. I think it will eliminate the potential fungus issue.

what is wrong with fungus? that's how nature breaks things down (i.e. makes compost). it's just rotting vegetation, which is what we want in making compost. maybe you are just trying to get it done really fast, and i understand that.
get a trash barrel with a locking lid, drill holes in the sides for air to get in, and every week or so tip it on it's side and roll it around a bit. that is the same movement as the composters you spin with a crank and lots cheaper, especially if you have access to a worn out trash bin that isn't falling apart.