Three episodes into Design Star and the personalities of the designers are starting to emerge. The unofficial theme of tonight’s episode? How to work nicely with others. Doug and Cathy take note.

The final design count: two great rooms, one meh room, and one Oh my God, what the hell were you thinking?! room. I found it interesting that the Callegaris family ended up with the absolute best and worst rooms from the challenge in their home. Sorry kids. You rolled the dice, won, and lost with this thing. Hope you enjoy repainting your living room!

Tyler and Meg’s dining room. Meg dropped the ball last week in the white room challenge but give the girl a room that needs to function and she comes through. Tyler’s wood and arch wall added much needed interest, architecture, and a focal point to the room. The judges criticized the team for not making the space more personal, but come on folks it’s a dining room! As soon as the cameras leave, I’m sure the kids will have personalized that dining room table by tossing backpacks and homework all over it when they come on from school. Personally, I think it was a minor criticism they aired to show why Tyler and Meg didn’t win the challenge. Whatev. 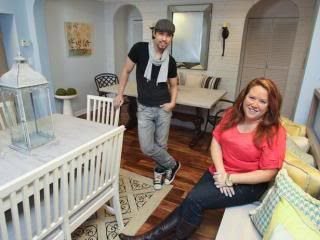 Leslie, Kevin and Kellie’s basement. This was my favorite room from the challenge. Kelli’s island helped define the zones of the room and made the structural columns look like a decorative element instead of purely functional. It pains me to say this because I wear and use lime green often in my own projects but Kellie, this is the second lime green room you’ve designed. You really need to explore a different color palette next time, OK? You can’t go back to a lime green room in a future challenge and expect to win Design Star. 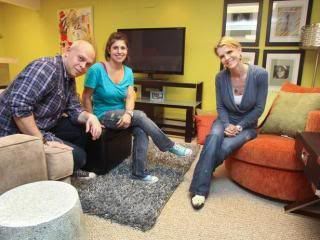 I love everything about Kevin’s office and his shelving in particular. I am so pinning those shelves for inspiration! Functional, fun, and family friendly. He definitely deserves the win.

Everyone went ga-ga over Leslie’s collage of the children’s artwork. It’s a great way to personalize the space. I’m sure it will mean a lot to the family. However, since they weren’t my kids or artwork given to me by the kids in my life, I can’t do cartwheels over it. Sorry Leslie. It’s a great idea. I’m still waiting for my morning coffee to work it’s magic. Maybe I’ll feel differently about your kid’s artwork college after my second gallon of coffee. I think it’s adorable Cathy brought up her wife and kids during her interview. Although it may slightly hurt her (I hate thinking and writing that.). Let’s face it. HGTV has LGBT designers (My gaydar goes off regularly) but for so some reason HGTV isn’t open about it. Come on Scripps Howard it’s 2011 and no one cares as long as the designer is talented and the show is entertaining.   Have you met Ellen Degeneres? ‘nuff said.

Cathy, Bret and Karl’s entertainment room. Cathy is clearly this season’s villain. The only designer she hasn’t clashed with in so far is herself. Kudos to Bret and Karl for standing up to Cathy when she treated them like crew instead of fellow designers. Sadly, it meant their entertainment room was disjointed, neutral, and blah. Cathy was princessy and didn’t want to play with others. Shopping is not designing. If it were, I’d have my own show. 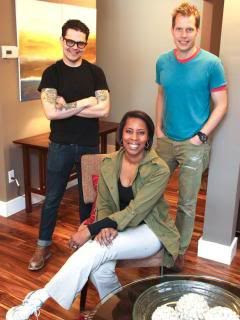 Poor Karl for being saddled with two boat anchors as teammates. The guy has promise. He is the only designer in the history of Design Star who actually finished a tile back splash!

Bret, honey – where’s that edge you keep talking about? Your tattoos? I’d love to see it before you get the boot. Your little corner of the room was weird to say the least. Maybe it was a snore because Cathy would not let you do anything else. Oh well, at least the Scano family got a nice coffee table out the deal.

Then the wheels fell off.

Doug and Mark’s living room. Doug was a delusional speed bump. When you get feedback about your wall color such as:

“It gives you a queasy feeling. It’s all wrong.”

“It’s the color of organ meat” (My favorite!)

You do not counter with, “It’s not salmon.” You change the wall color! Apparently, someone did not watch and learn from past seasons of Design Star. Sure, the Novogratzes were the guest judges and they are risk takers, but you deserved the boot because you didn’t learn anything from the rare feedback you were given. I think the homeowners where trying to be polite when ooh’ed over the room. I’m sure they were really thinking, “oooh, how much paint do I need to buy tomorrow to keep my room from looking like stomach lining?” 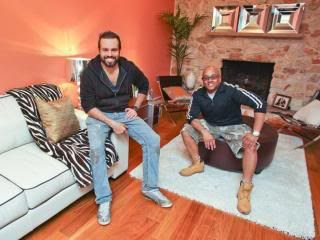 And Mark. Oh Mark. I’m all for being a team player. Unlike the judges, I realize that there is a point where you have to give in to your clueless teammate to get the job done on time. You fought Doug throughout the challenge on his wackadoo wall color, furniture choice, and placement but you did yourself a huge disservice by keeping your mouth shut about it when you were up against the judges. It almost got you tossed. I respect Vern as a judge and a designer but he’d bounce my butt from the show because the first time he’d tell me I had to show leadership during a group challenge (his common complaint) I’d tell him that he’s been a lead designer for too long to remember how it is to work as an equal in a group. Sometimes you have to roll with it just to get the job done. However, the part where you need to stand up for yourself about fighting your partner tooth and nail is at the judges table.  Grow a pair Mark.

Next week, the designers work on a bed and breakfast. And surprise, surprise Cathy gets even bossier!

What do you think? What worked for you? What didn’t? Any favorites yet?


Disclosure: From here on out my Design Star posts are not sponsored. I'm writing recaps because I enjoy the show and from the looks of things, you enjoy my recaps, snark and all.
Lisa Nelsen-Woods at 7/26/2011 08:36:00 AM
Share

Can't say I have any favorites as I did in past seasons but I can stand when the contestants are arrogant and can't operate as a team (ie.Cathy and Doug). I find it so distasteful and ugly. I hope Cathy is next to go. She is too full of herself.

Cathy annoys me so much, there's no way I would ever hire her or watch a show with her because she's just so uptight and self-righteous!