How to Make Tepee Trellises

I planted scarlet runner beans, winter squash, and cucumbers in my covert front yard vegetable garden. The vines are growing! They need trellises. 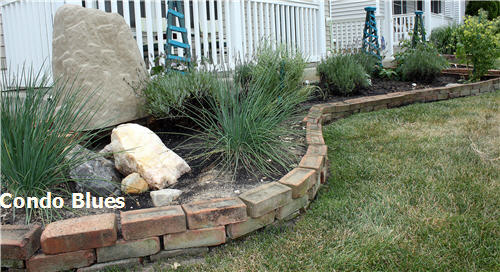 Husband and I found functional trellises but were leaning toward something with a little style because they will live in the front yard. The decorative metal trellises were more for what we were going for but did not look sturdy enough to hold heavy winter squash or cucumbers. Oh and the decorative trellises were stupid expensive for flimsy-ish spray painted black metal.

I promised Husband I would build him a set of tepee trellises for the front yard.

I cheated a bit and bought pressure treated wood deck rails and fence post caps. Husband suggested using such thick rails so the trellises will withstand our ferocious thunderstorms. Good call.The trellises toppled during a thunderstorm shortly after I installed them and before I had a chance to stake them in place.

I chose pressure treated wood because it is treated to survive outside in the element for more than a year. Why not reclaimed wood? Because older pressure treated wood may have been treated with arsenic, which is something I don’t want to introduce into my garden bed or the food I’m going to grow on the trellises.

I used galvanized four inch deck screws at the top of two deck rails to screw them together in a V shape. I used galvanized screws so they won’t rust. One of the reasons I used deck rails is that they already had a decorative mitered edge that I used to make the V shape. Why miter if I don’t have to?

I screwed a set of V shaped legs to the side of each fence post cap. A little green outdoor paint leftover from

I needed something to support the winter squash and cucumbers on their tepee trellises. I broke out my compound miter saw and some plywood.

I cut the plywood in to graduated 2-inch thick strips. I screwed the slates on four sides of the legs with half inch galvanized screws. I tried to stagger the slats at an angle on each side for interest. A little bit of paint later, I have two slatted tepee trellises!

Since I used pressure treated wood for most of this project, I didn’t need to paint the trellises to protect it against the weather, with the exception of the plywood.  I did it anyway. I have a bunch of outdoor paint leftover from the door and my porch chair revamp.

plywood slats to protect them from the weather.

I wanted something a bit brighter to use as an accent color and to protect the plywood slats from the elements. I figure since I took the time to build something from scratch I might as well take a little extra time to make it look cool instead of solely functional. I went with Rustoleum spray paint in Lagoon

. I bought a few more cans of spray paint than the project required. Fortunately, once I got started transforming the garden into an actual garden, it lead to a Power of Paint Remodel on the front porch. Stay tuned for more porch projects!

What do you think? Are my tepee trellises over kill or garden art?

Rachel (Hounds in the Kitchen) said...

I LOVE it!! This year my beans are on a row trellis I made from criss crossed branches but it is two years old and has exceeded its useful life now. I may use your plans to make teepee trellises for next year. The blue color is really cute.

These are really cool! And inspiring! Way to go, Lisa.

This looks great!! I really needed some teepee for my raised community garden plot, but just couldn't swing the extra finances this year. I'm definitely going to keep something like this in mind for next year. Thanks for sharing.

Then again, I tend to love anything with a garden growing around it. I seem to have had a black thumb the last couple of years . . . :o(

you know, I just use tomato cages for my squash and beans, but yours look so much better... Thinking I will switch

Totally digging this! They look great and now I know I can do this too. Thanks. Oh, what vehicle did you end up buying?

Anne - Thanks! We ended up buying a Ford Focus that was a former lease. It was up against a new Focus vs the used. The new sales guy's sales style didn't mesh w/ our shopping style and he was more interested in pushing the loaded inventory model than ordering one to our specs. The used guy was much more in tune w/ us, the used car had low miles and still had Sync (wicked cool!!!) With the Federal debit issues and unsettled interests rates, I'm glad we went used instead of new.

Those are gorgeous! Love them. ;)

Those are so very cute!!

This is so cute! I love the color. I'm your newest follower!

These are wonderful trellises -- you've inspired me to make our own. I love your idea of the fence cap to finish them off.
dawnedesign.net

Love these, Lisa! Great job! I'm thinking this would be a super fun DIY project for our garden next year (kitchen is consuming my summer this year). Thanks so much for sharing your creativity! ;)

This post made me smile. Thanks for inspiring me and many others to even attempt this feat. Really appreciate that you linked up at the Creative Bloggers' Party & Hop.

SO pretty!! Would LOVE it if you would link these up at my turquoise lovin' party going on right now!! http://www.sweetlittlegals.com/2011/11/turquoise-lovin-13.html