This project is not mine but it’s so awesomesauce I must share it with the entire Internet. Yep. That. Cool.

Mr. G is racing in his first Cub Scout Pinewood Derby. With a little parental help, the kid needs to turn a block of wood, a weight, and some wheels into a car for the BIG RACE.

It sounds fun. I wish Girl Scouts did something like that. Even at a young age, I'd use any excuse to break out the tools, ya know?

When his mom told me Mr. G wanted to go for style instead of speed, I expected Mr. G to make a car looking like the Batmobile (a thumbs up choice because we share the same taste in superheroes) or an ice cream truck to go with his career goal of being an ice cream man.

Why an ice cream man? Mr. G has two reasons:

You can’t argue with that.

The kid surprised both of us with his car design – a hot dog! 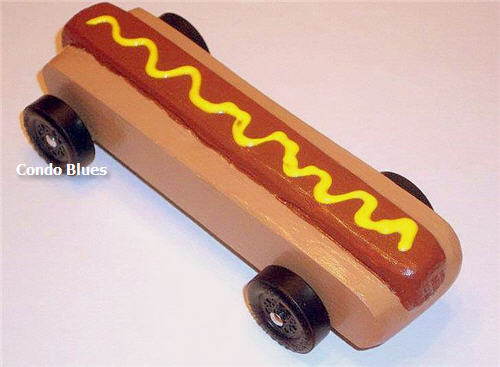 The kid goes for comedy. As a former professional jester, I have the utmost respect for that. 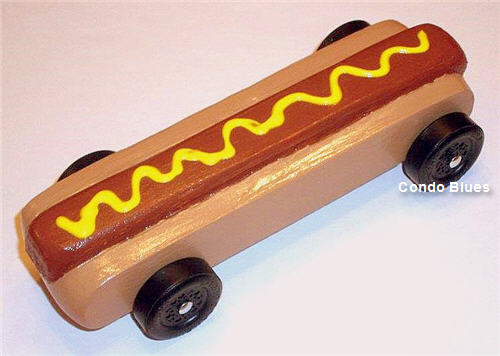 Mr. G and his mom borrowed a Dremel to create the car body. Mr. G used fabric puff paint to make the mustard on the hot dog car.

I have funny photos of Mr. G pretending to eat his hot dog Pinewood Derby car but am not posting them for his on line safety and in accordance to his second career goal. Mr. G is going to be a Mexican wrestler during the winter when it is too cold to sell ice cream. Mexican wrestlers do not appear in public without their masks. I’m not sure how that is going to work out with his third career goal – be in a boy band after wrestling season but before ice cream season. He says he’s going to do all of this before he gets to high school.

God, I love that kid!

LOL...wonderful story!
My son got third place for his den in his first Pinewood Derby this past Friday and his car was yellow with holes drawn on and named CHEESE!
Sue Clarke

That is stinkin' cute! You should join me for Handmade 52! http://raisingoranges.blogspot.com/2012/01/handmade-52-3.html

Oh, I just had to come and comment on this! My son raced Pinewood Derby and got first place in his last year of Cub Scouts, but he would have been all over making his car look like this IF he had seen it. LOVE it!!

This is awesome! My son brought home his pinewood derby last week and we've been trying to decide what to do with it. I'll have to show this to him. I found you through Skip to My Lou. Thanks for sharing! :)

Found you on Skip to My Lou. Could you please share this with our readers for Fun Stuff Fridays? http://www.toysinthedryer.com/2012/01/fun-stuff-fridays-8.html