Husband and I did not officially discuss it but it was understood we would give dog chemo to each other for our anniversary because Blitzkrieg is our most precious gift.

On a recent walk with Blitzkrieg (made possible by you and dog chemo), I discovered the little darlings from the neighborhood next door kicked in several slats from wood fence that divides the two neighborhoods – two feet from the fence gate. AGAIN. Apparently, the cherubs think the word condo means rich. *sigh*

The weathered and broken boards somehow made their way to my garage. 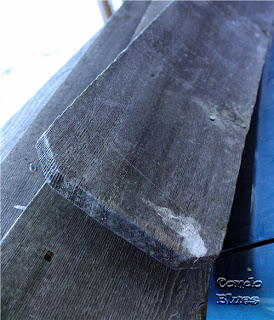 The boards are broken and can't be reinstalled on the fence.

After 15 years of marriage, I wanted to give Husband a  little something to let him know how much I love him. I made him a stenciled Avengers sign from reclaimed wood because he has been counting down the days until The Avengers movie opens. For real. 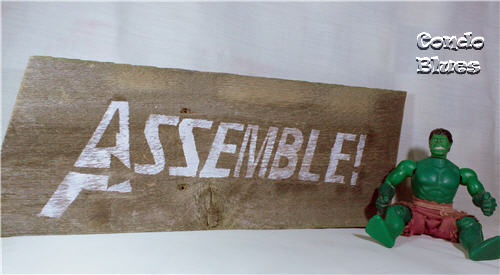 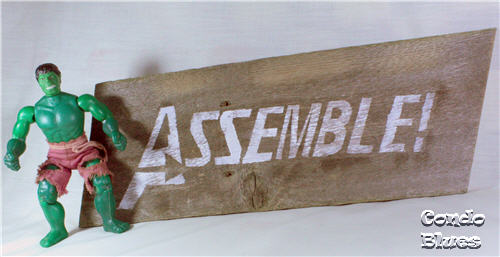 If you need further proof, I give you Husband's childhood Mego Hulk.

You can skip this step if you want to. However, with all of Husband’s childhood comic books in my house for 15 years, I might have read one or two for the sake of my marriage.

2. Create the Assemble! artwork by scanning Assemble from a comic book and printing it. I had to print my artwork on two pieces of paper and tape them together due to the size.

3. I don’t have a fancy Silhouette or die cutting machine. No problem! I made my stencil old skool-ish. I traced the artwork on freezer paper and used a craft knife to cut out the letters. 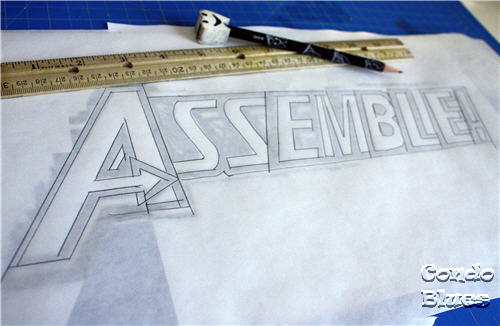 The A is the key in this design according to my resident Avengers expert.

Make sure you cut out and keep the interiors for the A and the B.

4. I cut the wood fence slat to size using my compound miter saw and at an angle for interest. 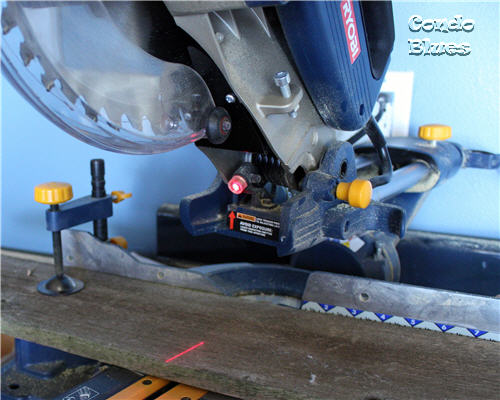 My compound miter saw has a laser sight. It is handy!

Tip: I removed the nails from the reclaimed wood by turning the board over and using my Auto Hammer to back the nails out of the board. It’s easier than using a regular hammer. 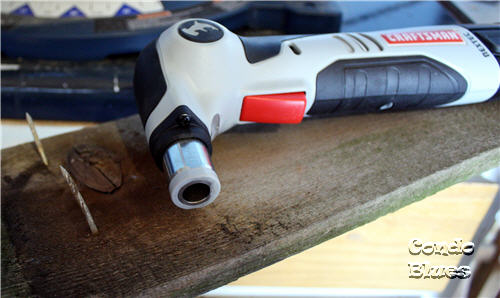 5. Spray the paper stencil with the spay stencil adhesive and attach it to the reclaimed wood sign.  My board was rough. The spray mount didn’t want to stick to the board right away. 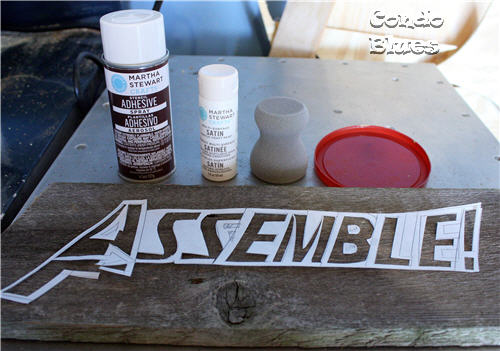 I encouraged this by adding painter’s tape to the edges of the stencil. I put a pile of heavy books on top of the stencil and let the adhesive dry over night. 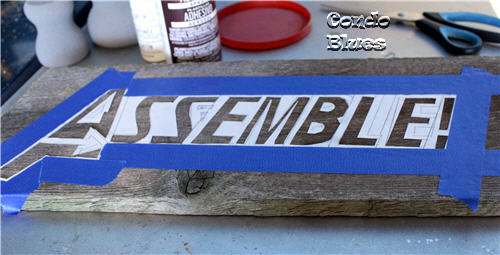 6. I want Assemble! to look weathered to match the wood. I watered down white craft paint on my super fancy expensive painter’s pallet – a repurposed lid from an oatmeal container. 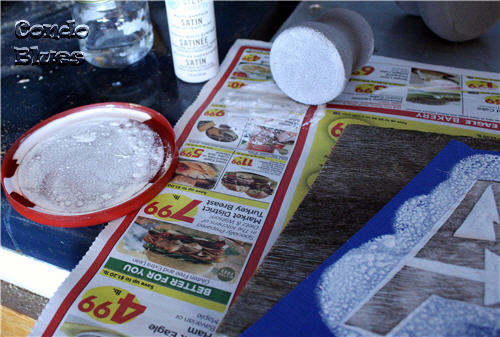 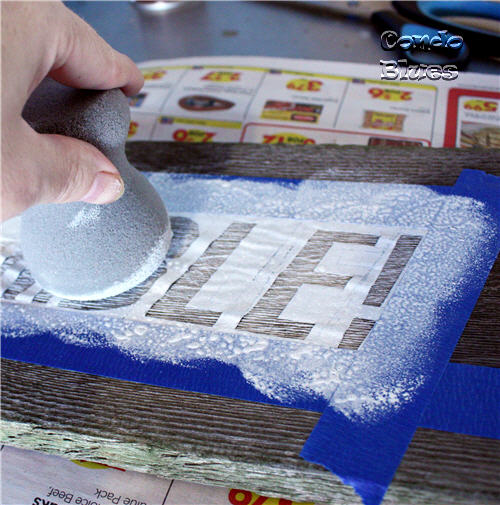 8. Remove the stencil while the paint it wet. 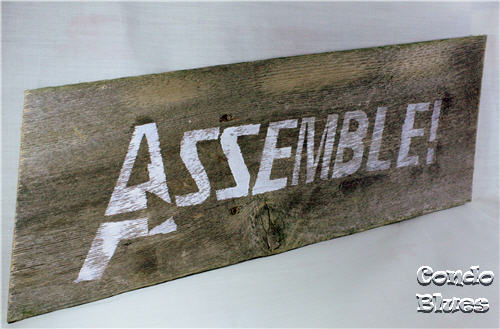 9. Add a saw tooth hanger to the back of the sign if desired.

You might think a wood Avengers movie sign is an unusual anniversary gift. I’m sure it is for most people.  However, Husband has been waiting for The Avengers movie to come out since he was 12 years old.

What a neat idea! My son would LOVE this sign!

Psst, having power tools is WAY COOLER than having a die-cut machine. ;o)

Wow, you've done well and I can see why your husband loved it. You tapped into his inner child. Love it. I found you through the Naturally Nifty Tuesday party. Hope you'll stop by and visit at Quirky Vistas sometime and see what I'm up to there!

Lisa! Check out how Michael went to see The Avengers last week! (He won the costume contest at the theater. He's as much a DIYer as you are.) http://myplasticfreelife.com/images/2012-05-Michael-Captain-America.jpg

Okay, I don't know why my link is not working. I guess you have to copy and paste.

I love this, I hope you will come and share it on my first link party " Summer Bucket List Ideas" http://www.missinformationblog.com/2012/05/summer-bucket-list.html

Very cool Beth! We didn't have a costume contest at our theater. I wore my Thor's Hammer necklace to the movie though. It's not such a comic book thing as a Danish Viking thing but Husband appreciated I was getting into the movie too.