Between going to Blissdom and prepping for BlogHer, my world turned upside down. I did not have the time or energy to have a Twitter necklace made even though I had paid for all of my BlogHer expenses pre-canine cancer and everyone insists I still go to BlogHer.

A free-to-every-customer-who-walks-through-the-door Mod Podge make and take event at Michael's (AKA not a blogger thing)  gave me the idea to try to make a Twitter necklace.

Then I made three more. (It pays to tidy up your craft room, you find stuff to make stuff.) 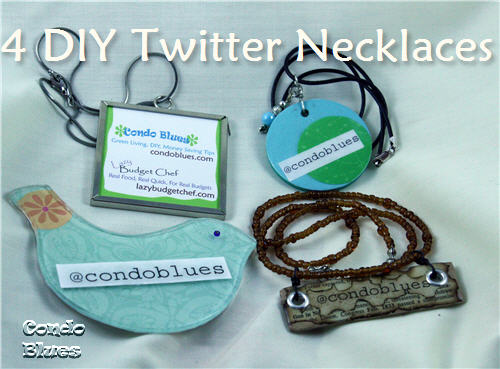 Two of them use reclaimed materials because I gotta be me.

I made this at the Michael’s event to support my bloggy friend Cathie Filian, who, with her business partner Steve Piacenza, created the new Mod Podge Elements line of plastic shapes and packs of decorative papers. If you aren’t into wearing plastic or are trying to reduce your plastic use, this idea may not be for you. Keep reading! There is something for everyone. 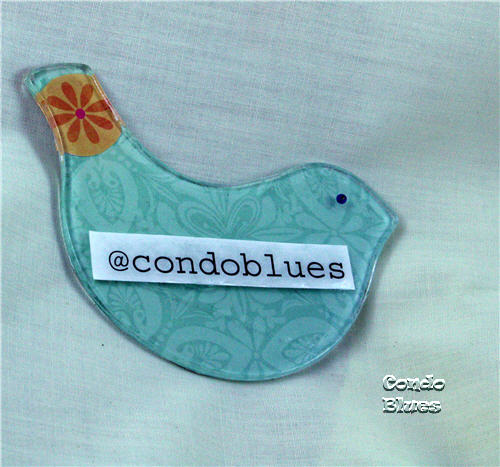 1. I traced the bird shape on the decorative paper with a pencil, cut it out with scissors, along with the flower from another piece of ‘Podgable paper and attached them to the back side of the bird with Mod Podge.

2. I added a coat of Mod Podge to the paper on the back of the bird to seal it after the first coat dried.

5. I used Mod Podge to add a blue bead from my Grandma's beading stash for an eye when I got home. I could have easily made it into a necklace if I drilled a hole into the bird but I think this bird is a little big for a short person like me. Instead, I used E6000 glue to glue a pin back to the back of the bird so I can pin it onto my tote bag or conference lanyard. 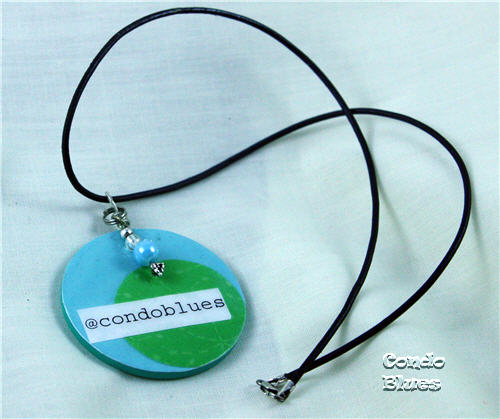 I found a plastic disk that came with mini cheese while cleaning my craft room. You can use a wood disc from the craft store, a large button, or a poker chip for this project if you are not a cheese fiend. 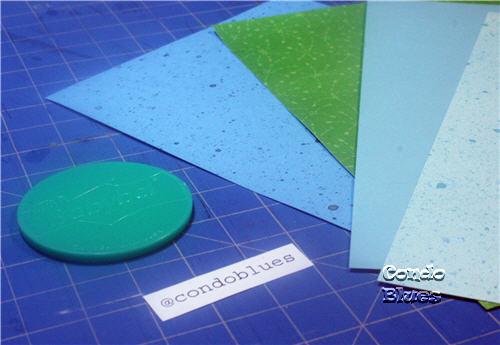 1. I drilled a hole at the top of the chip with a small drill bit and my drill. 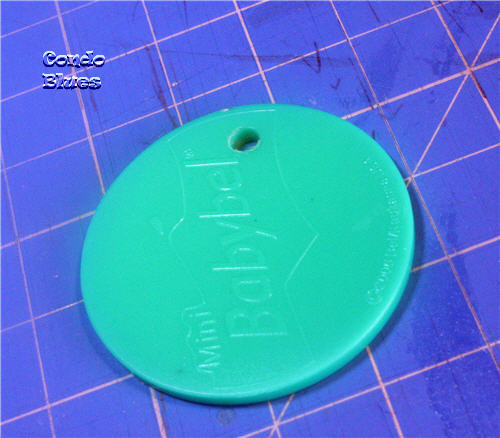 2. I traced the disc on blue paper with a pencil and cut it out with nail scissors to make sure I cut a round circle without little nubbies.

3. I traced a spool of thread on green decorative paper and cut it out with the nail scissors. 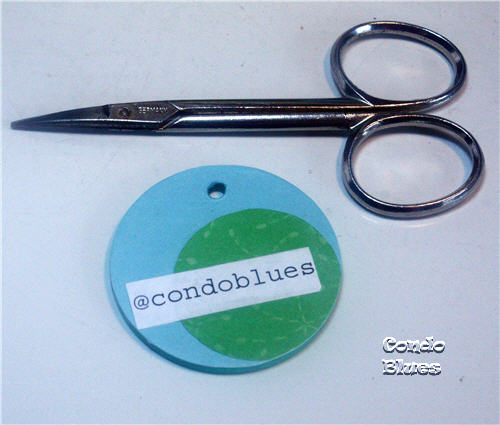 5. I cut a laser print of my Twitter handle from a piece of paper and Mod Podged it to the necklace. If you have an inkjet printer, put your printed paper in the freezer for 24 to keep the Mod Podge from smearing the inkjet ink.

6. I poked a hole in the paper with a straight pin and used it to widen the circle.

7.   I covered the disc with Dimensional Magic to give it a glossy texture. I let it dry over night. 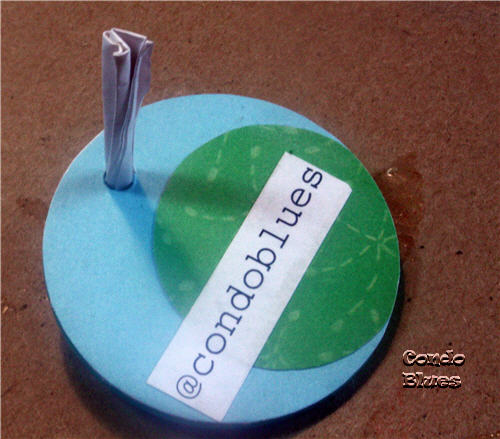 Tip: A folded piece of paper in the hole keeps the Dimensional Magic from filling and closing it.

8.      I grabbed the last of my Grandmother’s bead and jewelry making stash. I attached a figure 8 of wire to the disc to hang my necklace. I strung a few beads on a headpin, used needle nose pliers to make a loop and attached it to my pendent with a jump ring.

This is an easy one. Especially for those of you who aren’t DIYers or make jewelry. 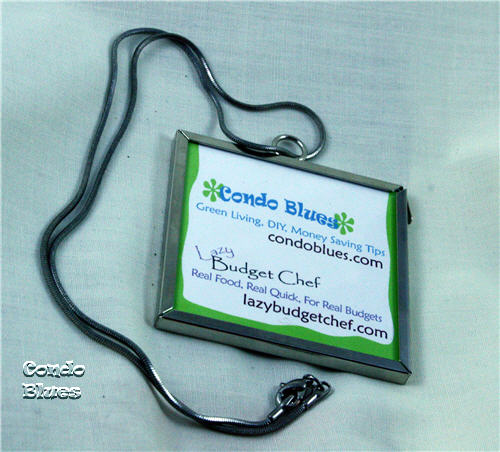 I saw necklace frames at craft store after I got my from my BlogHer business card sponsor Magnets on the Cheap and got an idea! 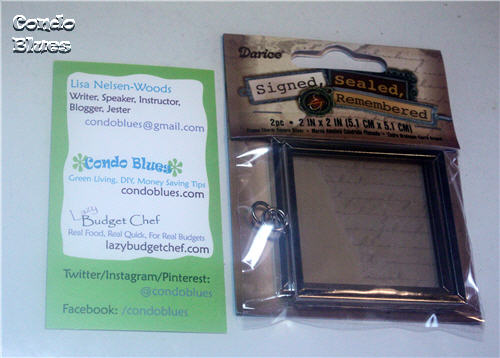 You can buy a smaller frame if you want to show off one blog/Twitter handle.

1.      I opened the frame necklace, cut my business card to size, and put it in the jewelry frame. 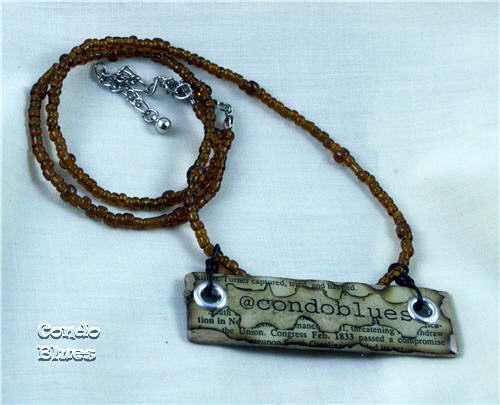 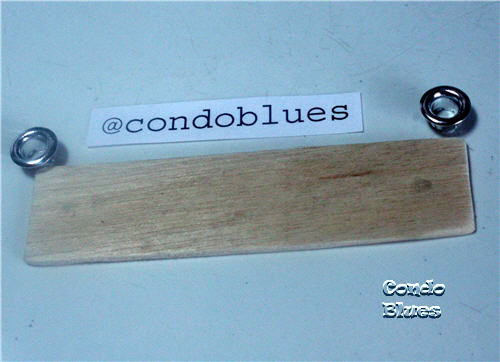 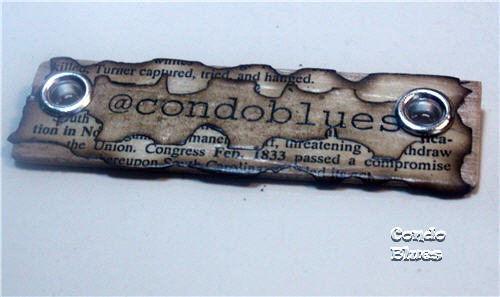 These look groovy! I especially like the piraty-looking one. Clever girl;)

These are all so cool! I wish I had this post before I went to Michael's and stood in the bead aisle for an hour wondering what to do :) At least It gave me an excuse to play with shrink plastic. Thanks for all the great tips...must pin for later. Great meeting you at Blogher!

Those are awesome. You could start your own business with those!

What a fun project. I wish I would have known you were at BlogHer this year, it would have been lovely to meet in person.