My insomnia is visiting and won’t leave like an obnoxious relative (not that I have any experience with obnoxious relatives who won't leave my house. My relatives are lovely.) Putting my energy into a project helps me get through the days I miss Blitzkrieg so much that I want to jump out of my skin because I haven't slept in days.

So instead of packing before I left for BlogHer, I grabbed the low VOC paint I had left over from painting the kitchen and used it to paint an accent wall in the living room as a no cost project.

I have several half rolls of painter's tape in my tool stash (this will teach me to keep the garage more organized.) I also had a roll of masking tape I don't remember buying. I remember my parents using masking tape to tape off windows and molding when they painted my childhood fixer upper but I’ve always used blue painter’s tape for painting projects. I’m not sure why. 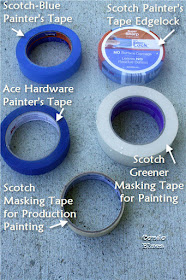 I used equal amounts of

to tape the ceiling, adjoining walls, baseboards, and around the fireplace. 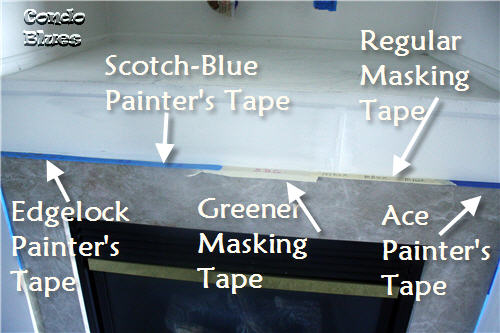 I painted the wall with one coat of Kilz low VOC primer because my walls are damaged. The builder used watered down cheap paint to paint the drywall. I am all for being thirfy but this is why I never cheap out on paint. After the primer dried, I painted the wall with two coats of Dutch Boy Refresh no VOC paint in Hootenanny Green.

I let the last coat of paint dry overnight before I removed the tape. 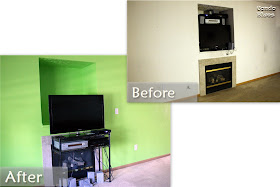 The TV will go back into the niche a week or so after the paint cures.
The Results 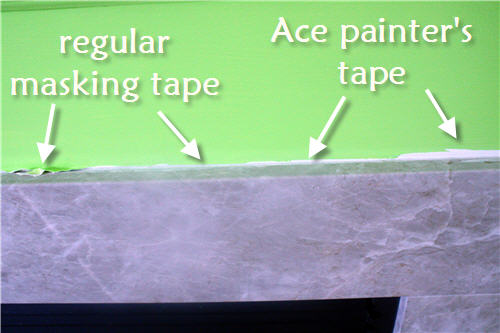 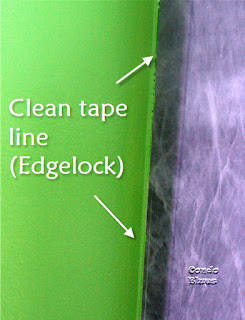 Conclusion
Naturally my two favorite performers are the two more expensive tapes I purchased. I guess I can add don't cheap out on painter's tape to my DIY Don't List.

Disclosure:  I bought all of the tape I tested in this post with my own money. I didn't favor one brand over the other. I just grabbed whatever brand the store sold at the time I bought it.
Lisa Nelsen-Woods at 8/19/2012 02:00:00 PM
Share

Thanks for that comparison. Always wondered what was best.

Oh what a great post!! And thanks for taking the time of testing them all out for us :)

Thanks so much for sharing this at The DIY Dreamer.. From Dream To Reality!

Great review! Thanks for sharing.