Confession time. With superhero movies hitting the theaters, nephews who like superheros, and needing an escape from last summer's canine cancer battle Husband dabbled a bit in his childhood comic book hobby with an electronic subscription (much cheaper, greener, and he has access to comics published before, during, and after the time he spent all of his childhood paper route money on comic books.)

And he brought me along for the ride.

I had to read the paper books he kept from kid hood to save my marriage.

Are any of you buying that?

Since it is in our backyard, Husband and I got our geek on at the Mid-Ohio Comic Con 'cause you know how we are total sci fi nerds, into supporting local events.

Husband got into talking to the comic book artists he admired and collected. As a former costumer, I got into the cosplayers - the patrons who created and dressed up as their favorite characters from TV, movies, books, and video games. The detail on some of the costumes is amazing. Others were cheesy on purpose - my wacky sense of humor admires that too.

If you are looking for Halloween costume inspiration, this is the place to be. 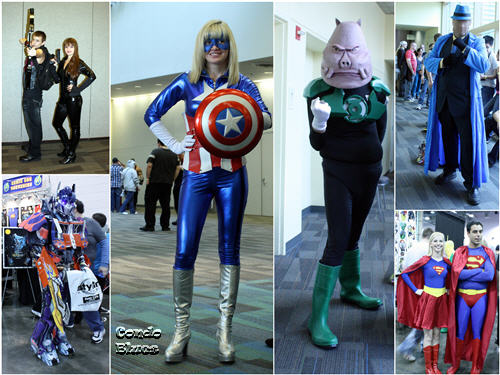 Tank Girl gets a big stand a lone photo because I think Tank Girl is awesome. 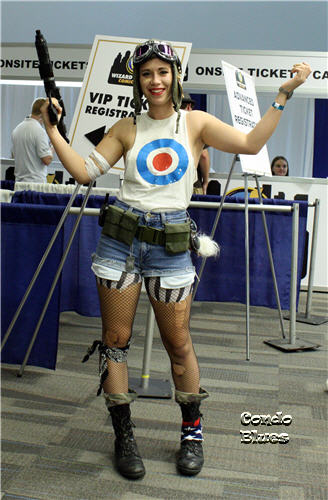 Tank Girl lives in a tank in post apocalyptic Australia, likes blowing stuff up, crazy hair color, lip gloss, and has a mutant kangaroo boyfriend named Booga. My teenaged self was at one with her fighting overloads because I could totally relate. I mean, I had a curfew, wore lip gloss, and actually got grounded by my parents. Oh! The oppressive suburban life!

Best Photo Bomb of The Day goes to the Batmen. The purposefully cheesy blue Batman photo bombed everyone with a giant cartoon bomb. 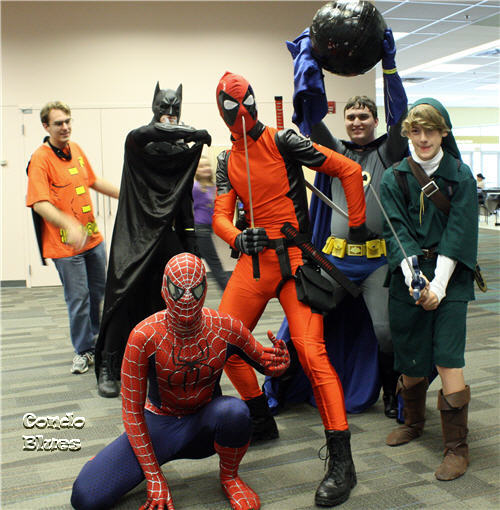 You can't have fictional heroes without fictional villains. We saw some baddies too. 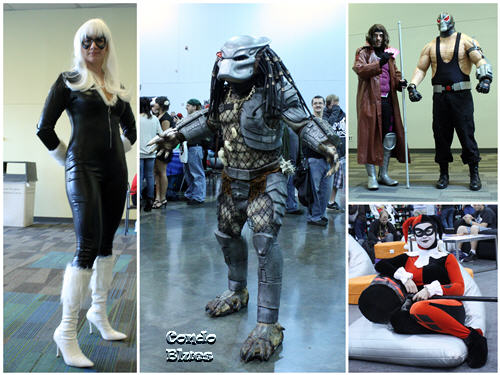 I am grateful the heroes where there to keep the bad guys in check. These two gallant timey wimey gentleman saved me from a scary Dalek! 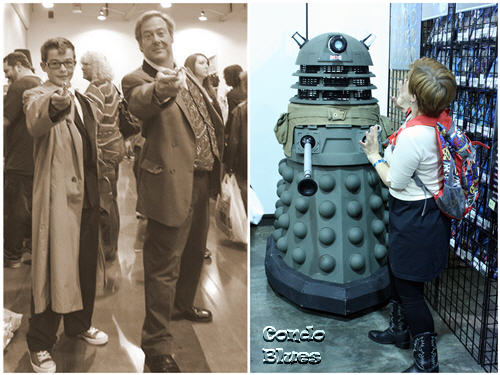 The Doctor (Doctor Who #10), The "Doctor" (Doctor Who, The Next Doctor Christmas Special), Dalek (Doctor Who, Victory of the Daleks), and me (not realizing until now I'm doing the same pose as Doctor Who #3 did in an old promo photo. Yep I'm Whovian.)

The Doctors are father and son. Both of the Doctors carried the appropriate sonic and not so screwdrivers! Does The Next Doctor deserve Dad of the Year or what?

They aren't comic book characters but are so cool I want to show you. The Predator costume is in this post twice because I am so impressed. I don't know how long it took him to fabricate his costume or the cost, but it is so impressive it deserves a second look. 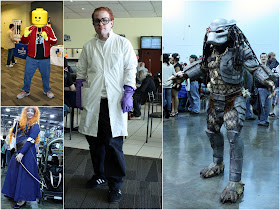 There was one comic book hero missing - The Technician. Craftsman partnered with DC Comics to create The Technician - the guy who fixes what needs to be fixed in the Hall of Justice. You can get a free copy of the comic book at the Craftsman booth at the New York Comic Con. I have never, ever wanted a comic book so badly in my life! 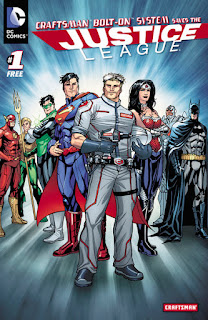 Husband said if I ever did a cosplay character I should do The Technician because I am the household Ms. Fix it, grew up reading DC Comics, and I have Craftsman tools to use as props. Plus his jumpsuit is more forgiving than Wonder Woman's spandex pants.

If, like me,  you can't get to the New York Comic Con,  you can download a copy on the DC Comics app and at CraftsmanComic.com. You can also submit a plot for the hero. I hope that means there are more Technician books in the future because I love it when my two worlds collide.

OK, OK. I know. Craftsman clearly created The Technician to promote their new Bolt On tool line but I loved it anyway. It's a fun read. Since I am the fix it gal around here and my goal is to encourage women to stop making Honey Do lists and start making Do It Yourself Honey! lists I'm falling head over heels for their concept of  fininishing a DIY project "makes you feel like a superhero" because let me tell you from experience it does.

A Justice League comic book shows Craftsman has a great sense of humor when it comes to showing off what their tools can do. I can't see any other tool brand doing something fun like this other than Craftsman. *tips hat*

The Bolt On tools aren't in stores yet. If you are interested in learning about them Stuart over at ToolGyd did a great overview on Craftsman Bolt-On System.

My favorite costumr is my Altar-Ego,Captian Pie Hole who makes an appearance every summer for the local Pie Joust. Captain Pie Hole- Defneder opf Truth, Justice and the right to eat pie.

Awesome costumes! I love the Doctor Who costumes, I'm dressing up as Rose Tyler for Halloween/a friend's stag-and-doe, and hopefully the next nerdy convention that comes around my way, so it's always a little Whovian fangirl moment when I find out that others I read also love Doctor Who!

Great post and costumes, but I loved reading that Craftsman has a comic book now. I hope you are able to snag one - or have someone snag one for you - even though you can download a copy!

Rose rocks! It was about time the female companions were strong independent women. 30 years in the TARDIS and we only saw varying degrees in Leela, Romana I & II, and Ace.

I read the Craftsman comic at Craftsmancomic.com. It's a cute book, finally we find out who changes the oil in the Batmobile and repairs Wonder Woman's invisible jet. Hint: The Technician wears special glasses to see it and fix it. Clever.

Those costumes are amazing Lisa!! Boy there is some great Halloween inspiration here!

Sarah Jane was pretty awesome, too.