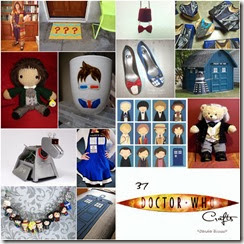 (Disclosure: I am also including affiliate links in this post for your convince)

I write notes at my desk with a Sonic Screwdriver Pen (check out all of the Doctor's sonics here!)

I bought a bought a Tom Baker Era TARDIS Key Keychain here shortly after I discovered the classic Doctor Who episodes playing on public television and carried it for years until it  wore out.

For those of you who don’t know your Who, Doctor Who is a British science fiction show about a Time Lord named The Doctor who travels through time and space in his ship the TARDIS (Time And Relative Dimensions In Space) which looks like a police box and saves the universe from bug eyed monsters.

The show first aired from 1963 to 1989 and took a little break until they made a Doctor Who TV movie in 1996. The BBC brought Doctor Who back in 2005. This year marks the 50th Anniversary of Doctor Who.

I put together a collection of Doctor Who DIYs and crafts to celebrate the geekiest week of the year. On November 22, 2013 the BBC will simulcast the Doctor Who 20th Anniversary Special around the world and, if you are lucky, in 3D a local theater! 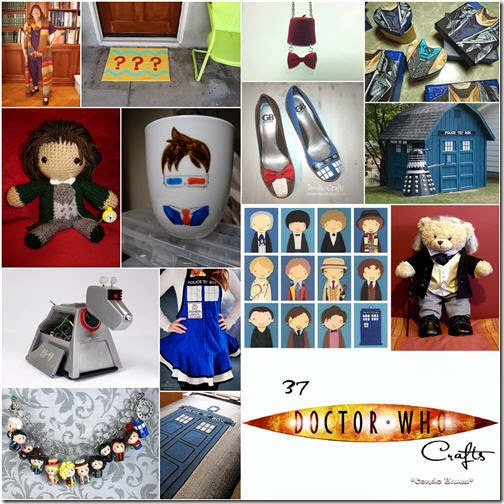 5 Doctor Who Crafts Featuring All of the Doctors


When a Time Lord’s body wears out, he doesn’t die, he regenerates into a new personality. Eleven actors have played the Doctor. They say you never forget your first Doctor because each one has their own eccentric personality and look. 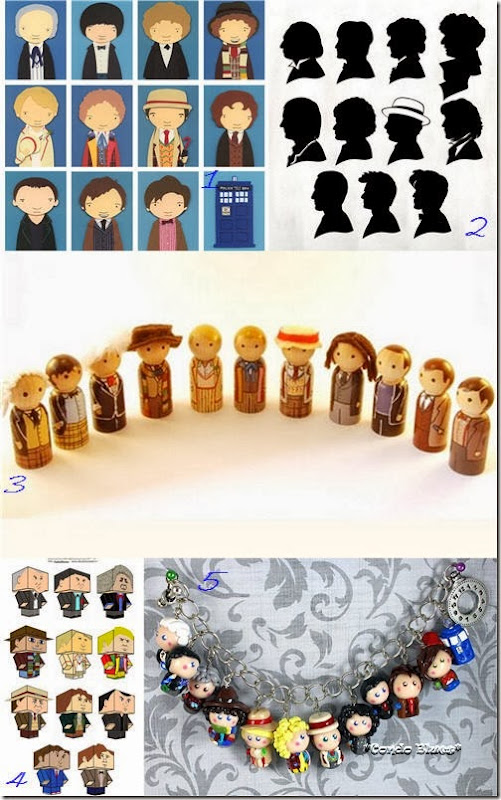 1. Nerd Love: Doctor Who paper collage You can replace the TARDIS with the 12th Doctor after Matt Smith regenerates into Peter Capaldi sometime during The Day of the Doctor TV special. (That’s not a spoiler non-Whovians. The BBC announced Capaldi will be taking over for Smith.)

3. Doctor Who Painted Peg People. Don’t confuse these peg people with the evil peg dolls in the episode Night Terrors. These Doctor dolls will save the day in a plastic free way.

4. Cubecraft Doctor Who DIY action figures combine your Mindcraft and Doctor Who obsessions into paper folding a full set of Doctors, companions, monsters, and allies.


The TARDIS has a chameleon circuit that allows it to blend into its surroundings. Then the chameleon broke and got stuck in the shape of a Police Box. The Doctor never bothered repairing it because he likes the TARDIS this way. 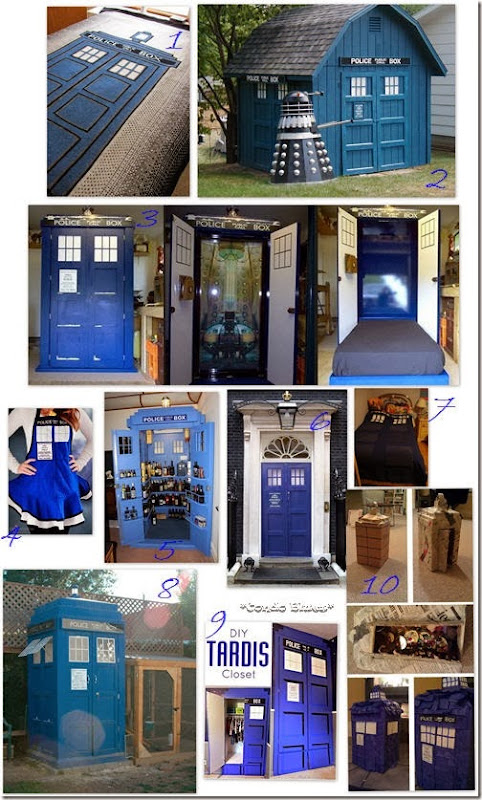 1. If you knit Ravelry has a free PDF pattern for a TARDIS blanket.

2. Store your stuff in a TARDIS garden shed. No one will attempt to nick your lawnmower if you park the Dalek security system in front.

3. TARDIS Murphy Bed opens to reveal the Ninth and Tenth Doctor’s interior. It also has  a talking telephone that plays four Doctor Who phrases and makes the TARDIS sounds and light effects if you push a secret button. I really want this bed!

4. Bakingdom made a TARDIS apron. What else are you supposed to wear when you bake Jammy Dodgers?

5. I have seen many TARDIS DVD cabinets but never a TARDIS liquor cabinet. Now I have. It just goes to show you can store anything in a TARDIS. Anything.

6. If you are such a dedicated fan that you don’t care what your neighbors or HOA thinks, make a TARDIS front door for your house!

7. If you can’t kit, consider sewing a TARDIS blanket instead.

8. This TARDIS chicken coop almost makes me want backyard chickens. I’d disengage the TARDIS flight controls as a precaution. There’s no telling what chickens in space would do to the timeline.

10. Since we are celebrating 50 years of Doctor Who, we should have a piñata party. A DIY TARDIS piñata will do just fine thank you.

22 Doctor Who Crafts Featuring Each Regeneration


Time Lords have a little trick they use to cheat death, they regenerate into a new person. Each regeneration has their own personality and look. 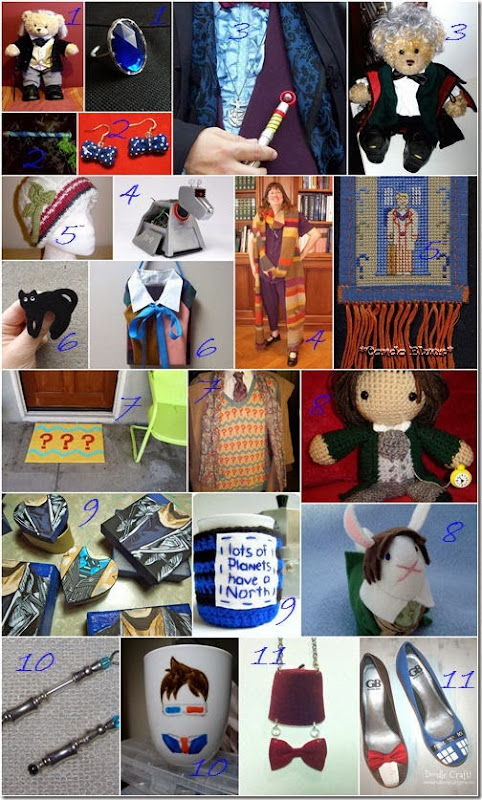 The Third Doctor introduced use the Time Lords’ galactic Leatherman tool – the sonic screwdriver. If you have a lot of cupboards to put up make the Third Doctor’s Sonic Screwdriver to help you with the job or to accessorize a DIY Third Doctor Teddy Bear. I love the little Jon Pertwee  wig!

The Fourth Doctor is known for his trademark long scarf. If you are an ambitious, Witty Litter Knitter has free patterns for the Doctor Who scarf. Since I don’t knit and an much shorter than Tom Baker, if it were me I’d buy 6' Doctor Who Scarf from Amazon so I’d have the time to build Time Lord’s best friend, a model K9 that moves!

The Fifth Doctor wears a stick of celery on his lapel. The cast said it was not always welcome because it would go bad during filming. I suggest knitting a celery stick hat inspired by the Fifth Doctor or make a Peter Davidson cross stitch bookmark instead.

The Sixth Doctor wore the most colorful costume of all his incarnations before and since. Ehinders on Craftsy make the Sixth Doctor’s jacket as wall art from thrift store fabrics. Pin a homemade Sixth Doctor Cat pin to the label to complete Colin Baker’s look.

The Eighth Doctor appeared in one Doctor Who TV movie they hoped would restart the series in 1990’s. Sadly it did not but you can read about Paul McGann’s adventures in books and comics with a crochet chibi Eighth Doctor on your lap or if you prefer, The Stitchy Button makes the Eight Doctor in Bunny form.

The Ninth Doctor kicked off the current Doctor Who series. Knotwork Shop makes Ninth Doctor cup cozies featuring Christopher Eccelston’s reply to people who wondered why an alien sounds like he is from the North. Give it as a gift in a hand painted gift box that looks like the Ninth or Tenth Doctor’s costume.
The Tenth Doctor has a sonic screwdriver that can do more than unlock doors and up cupboards. Celebrate by making a pair of Tenth Doctor sonic screwdriver earrings and enjoying a cuppa from a hand painted David Tennant Doctor Who mug.

The Eleventh Doctor is the Doctor we will be celebrating with during the 50th Anniversary Episode until it is time for Matt Smith to say goodbye and regenerate into the Twelfth Doctor Peter Capaldi. For some reason, Eleven thinks sporting a bow tie and fez is “cool” and you can too if you make a fez and bow tie charm necklace. If you side with the Doctor’s companions about the ridiculousness of the fez, then consider following Doodlecraft’s hand painted TARDIS Doctor Who Shoe tutorial

Do you watch Doctor Who? Who is your favorite Doctor? Will you watch the 50th Anniversary Special?