Our Getaway to Put-in-Bay

While Lacey’s separation anxiety is a wee bit better, but it still goes to orange alert level often enough that Husband and I haven’t taken a vacation since she joined our family.

WE NEED A VACATION.

I suggested we go to Put-in-Bay. It is close enough to go home early if we need to and still far enough away that it is Not Home.

This trip also fixes a hideous wrong I committed while growing up in on Lake Erie. I have never actually been to the Lake Erie Islands. I think I broke a local ordinance or something.

We knew we wanted to visit both islands. I wasn’t sure which one we should stay on. I arbitrarily picked staying on Put-in-Bay and I’m glad I did.

There were more things we were interested in doing on Put-in-Bay although I had to fulfill a childhood science class obligation and take a day trip to Kelley’s Island.

Every single science teacher used the Great Lakes and the Kelley’s Island Glacial Groves as an example of how the glaciers changed the landscape after the they receded. I finally saw them in person!

Science!
To understand the size of the grooves, that little white blob on right is Husband.

We visited the site invoked by my history teachers and a few steps from our hotel, Perry’s Monument . This monument commemorates Commodore Oliver Hazard Perry winning the Battle of Lake Erie in 1812. 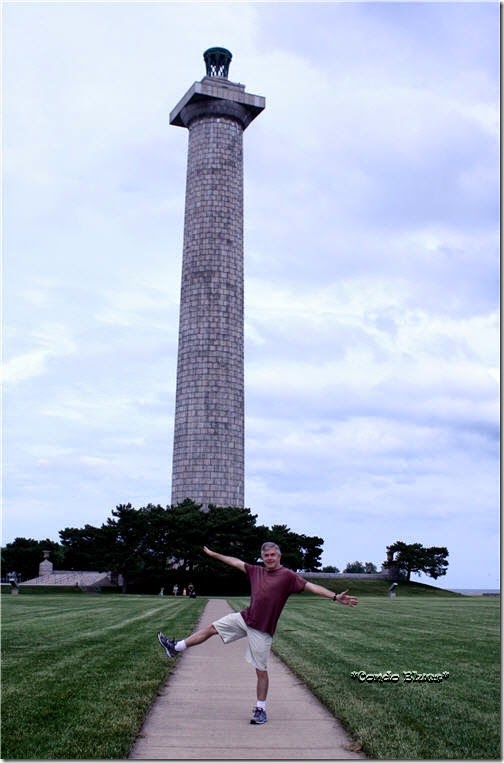 Proof positive that I will never have a normal vacation photo of Husband. I’m OK with that. He’s fun!

Commodore Perry suffered heavy losses, rallied his sailors with “Don’t give up the ship!” and went on to win the battle. Husband later observed, “He’s kind of a big deal here around here isn’t he?”  Yes. Yes he is.

We often enjoy Great Lakes Brewing Company Commodore Perry IPA at home. It tastes even better when you enjoy it in the shadow of Perry’s Monument. That’s a fact. Read about how we stuffed our faces with Put-in-Bay fish and other amazing food on my food blog Lazy Budget Chef

Being from the area, I knew taking a car to the islands is a bit of a pain. The islands are small and there isn’t a lot of parking space, not to mention you are limited to using the only ferry service that allows cars.  I figured since we have bikes and a carrier we might as well take them with us instead of renting them on the island.  It was a good call because it doesn’t look like the bike rental places have Lisa-sized kid bikes to rent just Husband-size adult bikes. 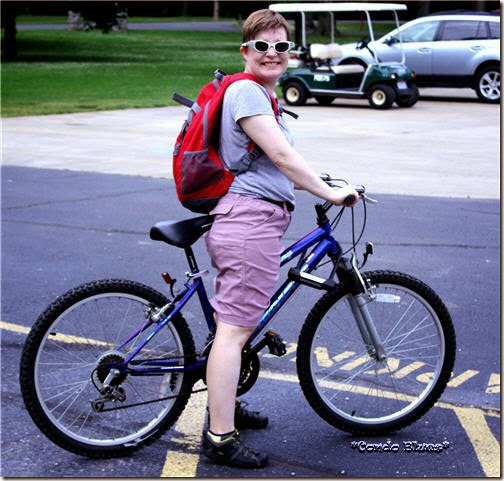 Let’s hear it for green and easy transportation! If you bring your own bike, it’s as cheap as using your feet! Learn how a simple bicycle tune up made our ride even easier here.

I hoped my leg would be OK since I ride an exercise bike as part of my physical therapy. Our backup plan was to rent a golf cart if I couldn’t manage biking everywhere due to my injured leg. I shouldn’t have worried because the biking was the best part of the trip! When my leg got sore from walking or standing it started to feel better as soon as I jumped on my bike. We spent most of our day on Kelley’s Island biking around to no where in particular after a great day of using bikes as transport on Put-in-Bay.

We stayed at the oldest hotel on Put-in-Bay the 141 year old Park Hotel. It was the perfect fit. We love history. The hotel caters to adults, it is downtown where the action is (in a small, laid back tourist town kind of way,) and is a little quirky - just like us!

We didn’t know about Lily, the hotel manager’s rescue basset hound, until we met her later during our stay. She is such a sweetheart!  Photo courtesy of Park Hotel

It did not take long after I smelled the familiar lake air and got back on the water as the ferry chugged to Put-in-Bay to feel like I’ve done this all before even though it was the very first time. As soon as my toes hit the the sand, I was HOME.

The blue thing on my leg is a compression sleeve.

That went double after we saw all the Ohio State Buckeye references on Put-in-Bay. It’s almost like we never left Columbus!

The only difference is this Buckeye House is a rental cottage. The houses painted like this in Columbus are owner occupied.

We have a geode at home but it is nothing like Crystal Cave. It is the world’s largest geode!

A science tour with a side of winery tour? Don’t mind if I do!

Heineman’s Winery discovered the cave when they were digging a well in 1897. Tours and harvesting the minerals kept the family winery a float during Prohibition. One of its crystals resides in the Smithsonian.

The area is known for its wineries because it has a Mediterranean climate that produces the most luscious grapes. Each winery is worth a visit because they are all slightly different. The Put-in-Bay Winery at the Doller Estate is more of a history of island life and wine sampling (look for this in a later post on Condo Blues,) Heineman's Winery tour features the entire wine making process, and the Kelley’s Island Wine Co is more of a wine bar type of place.

There’s more to do than breweries and wineries if that’s not your thing. We did a little live action Mario Kart on the go kart track and tried not to get too wild at the sweetest bar on Put-in-Bay – The Candy Bar!

There are pools and plenty to do for the kiddos and not to mention the lake! My only regret was the lake was too choppy to rent a boat so the ferry rides had to do. I think Husband was looking forward to it too. He commented when he saw me brushing up on the boating laws and checking if port and starboard are still the same as I remember (they are.) I guess that means we’ll have to go back!

It didn't take much time at all for us to fully embrace the Island Experience.

The Keys (a Key West themed restaurant) parodies the Key West Southernmost Point of the United States Buoy.  I never got a photo when I visited the original in Key West. I figured I might as well get a photo of the parody. You know how much I like parody! (Fun fact: the actual Southernmost point in Key West is on private property so the real one isn't really real.)