Dog Coats and Boots for Dogs Who Hate Wearing Clothes


Lacey, our snow warrior princess loves to romp and play in the snow. Her dachshund side goes into overdrive. She investigates every little foot print, crack, or hole in the snow when she goes outside and take care of business.

Being part Cavalier King Charles Spaniel means her natural fur dog coat is longer than a barley there dachshund’s but Lacey doesn't last very long in low winter temperatures, nor should she when the temperatures are so dangerously low. 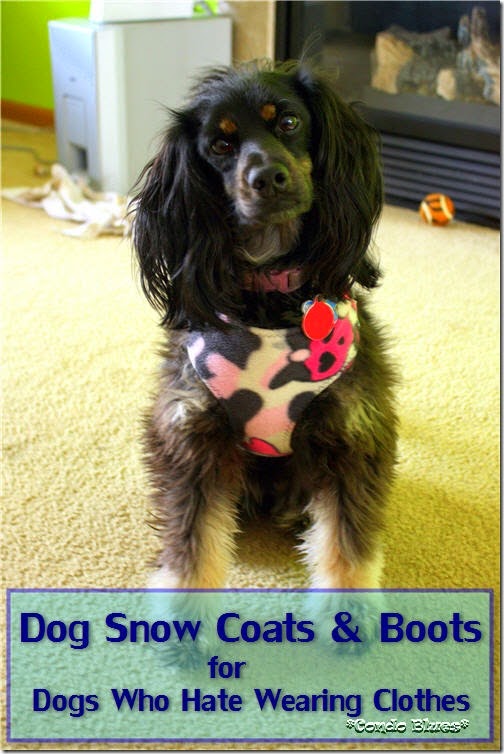 Too bad my dog hates to wear a dog coat. 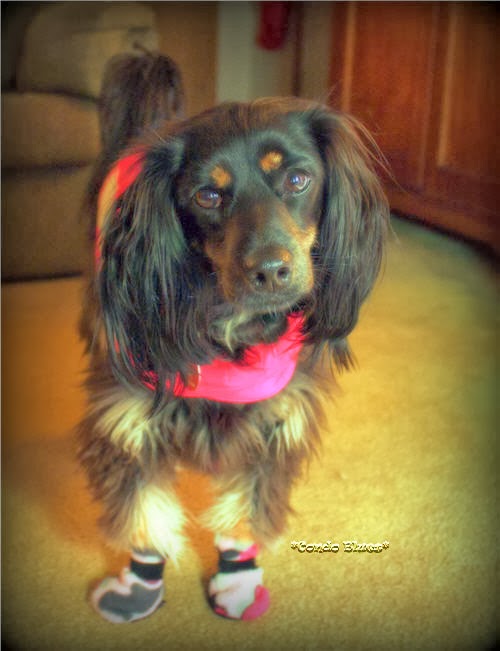 Lisa punted last year during the Polar Vortex and made me wear my Thundershirt outside because I didn’t have a real dog coat. My Thundershirt helps me stay calm when I get scared and anxious but I don’t like how the Velcro fasteners pull my fur sometimes. It isn’t as warm as a real dog coat either.

I was on the hunt for a dog coat that didn’t have Velcro fasteners and most importantly would completely cover and protect Lacey’s belly. Most dog coats cover the dogs back and have a thin band of fabric that  goes under the dog’s tummy. That doesn’t work well for small dogs like Lacey. She is so low to the ground that if we get anything more than three inches of snow her belly is going to be in the snow as she walks through it.

I also wanted her winter dog coat to look nice because if I have to look at it while Lacey is wearing it, it might as well be fashionable and functional.

I made Urban Thread’s DIY Dog Hoodie from scrap fleece in my fabric stash and gave it to Lacey for Christmas.  Yeah, yeah I know the hood is unnecessary nor functional. But I mean, just look at little Norton here. Isn’t he the cutest thing you’ve ever seen in his Urban Threads dog hoodie? 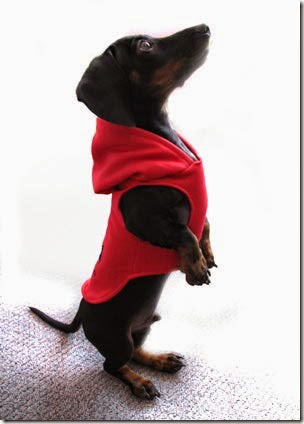 And Norton is a dachshund. Lacey is part dachshund. Therefore Lacey needs a hoodie just like Norton’s.

She doesn’t like one piece dog sweaters or coats and fought me when I tired to put the hoodie on her. 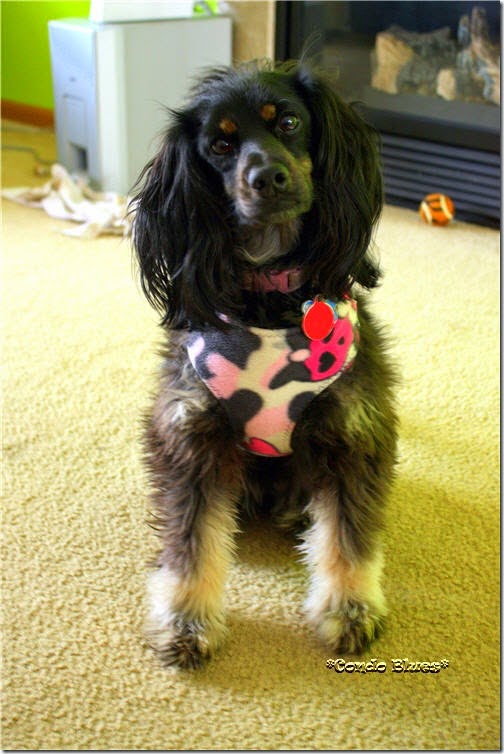 Keep reading! Lisa is going to show you how she modified my dog hoodie so I like to wear it. She will also give you some ideas on dog coats that dogs like to wear that you can buy if you don’t want to sew a dog coat.

I removed the hood, cut the back of the coat down the center and put in a test zipper from my sewing stash. That way, I hoped Lacey would be more cooperative because she could step into her dog coat. I had to find something that would work because it was negative twenty two degrees (F ) with the wind chill factor and Lacey had to take care of business outside. 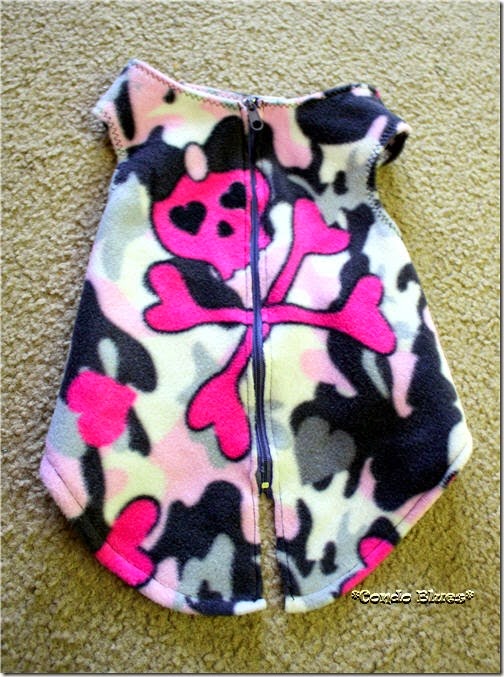 I used a zig zag stitch around the neck and leg holes so the coat will move and stretch with the dog while she plays in the snow.

The zipper doesn't pull my fur like Velcro. I could get use to this kind of dog coat! Hey guys, follow Lisa @condoblues on Instagram to see more photos of my adventures. I’m the best part of her Instagram feed to be honest.

Lacey won’t let us take her fleece off her when she comes in from the snow on a cold day. Lacey is extra snuggly when she’s wearing her fleece dog coat for some reason. We don’t mind that at all. 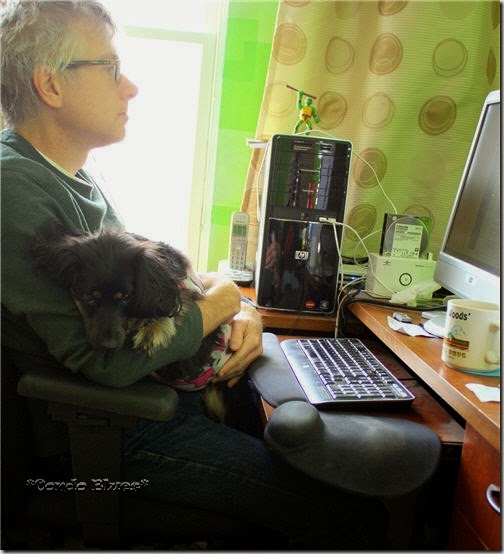 The zip up dog coat is much easier to put on Lacey because she steps into it. Lacey is more willing to wear it because it doesn't have a fasteners to pull her fur. The most difficult part of the process was putting up with her whining while I removed the test dress zipper and put in a new separating zipper in the correct length. 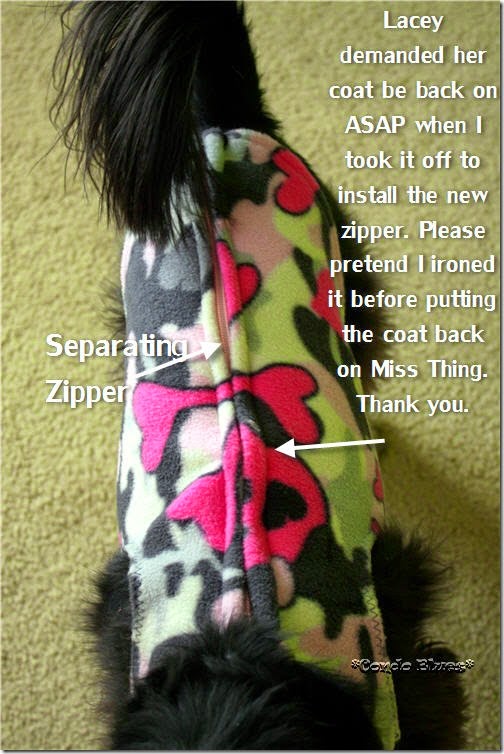 The separating zipper makes it a step in dog coat, just like a human zippered jacket or coat.


If you don’t sew, I poked around and found  Ruffwear sells side zip dog coats. In all honesty, if I saw these for sale first, I would have bought Lacey’s first dog coat instead of making her a hoodie.

The fleece Ruffwear Climate Changer dog coat is made from recycled plastic bottles. Unfortunately the longer leg holes don’t quite work with Lacey’s mixed breed shape but they sell other styles that do.

Lacey’s long dachshund like body needs larger leg openings like Urban Threads dog hoodie. I’m considering buying Lacey the Ruffwear K-9 Overcoat Utility Jacket for her Christmas present this year. This one is lined in the upcycled fleece we both like and zips at the neck opening and is a different style of step in dog coat.

Not to mention the purple coordinates with Lacey’s collar and leash.  She will be stylin’!


Ruffwear dog gear is a little more expensive but I think it is worth it. They design their dog products for active, sporty dogs and they last. Blitzkrieg’s back pack is Ruffwear. He used it a ton, it still looks almost new, and ready for Lacey to use when she’s ready.

I miss you buddy.


My dog hates to wear dog booties in the snow too.

Lacey showed me how much she appreciated the dog boots I made her ( Learn how I make dog boots here)  last winter by eating them so she wouldn’t have to wear them.

Going without paw protection in the snow is not an option. When snow or ices gets in between Lacey’s wee toes, she crumbles into a miserable little ball and I have to carry her home because she’s in so much pain.

Lacey still needs something to protect their paws from the cold and frostbite. I recommend Musher’s Secret paw balm (Amazon sells it here) made from 100% natural waxes for Canadian sled dogs and it works.

Lacey doesn’t freak out or try to kick it off like dog boots. The container shape lets me easily and quickly plunk her paw in the jar and cover it with paw balm. Think of if like chapstick for dog paws.

I think Musher’s Secret lasts longer on Lacey’s paws than the Four Paws Dog Paw Guard we used on her first. Both work well and I’d buy either brand if I ran out. I like Musher’s Secret a little bit better although it is a little more expensive if that is a concern.

How do you keep your pets warm when they play in the snow?