Can Your Laminate Flooring Kill You? 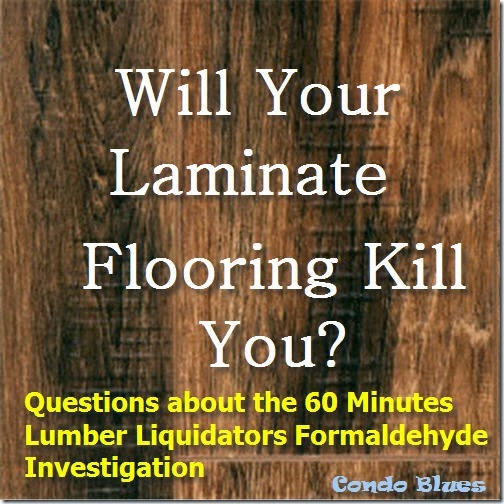 The basics of the story I linked to are this:

Especially when Lumber Liquidators assures customers on its web site that they “meets or exceeds rigorous emissions standards" for the formaldehyde in their laminate flooring (which appears in all laminate because it is in the glue.)

Continued exposure to high levels of formaldehyde have been linked to severe health issues. Elaine Schattner a physician and Forbes contributor quoted quoted Dr. Bernard Goldstein, a physician, toxicologist and former dean of the University of Pittsburgh Graduate School of Public Health in her article '60 Minutes' Is Right To Raise Questions About Lumber Liquidators' Toxic Floors:


““For flooring I’d be more concerned about acute health effects, particularly for infants crawling over the floor,” Goldstein wrote by email. Children breathe in more air relative to their small body sizes than do adults. “When they work hard, as they do when they crawl or run, they will have maximal respiratory uptake of anything gassing off the floor. Pets too,” he added.”

“On the program, (Dr.) Landrigan said that long-term exposure to formaldehyde increases the risk for chronic respiratory irritation, reduced lung function and asthma. “It’s not going to cause symptoms in everybody,” he said. Children are most likely to be affected.”

Not to mention the Habitat for Humanity families sliding around on Lumber Liquidators flooring and big chunks of their customer base.

What does Lumber Liquidators Say About Lying to their Customers?

In a nutshell, Lumber Liquidators says that the certified independent labs didn’t test the flooring samples correctly and they have no idea who those guys are in the Chinese flooring plant who told 60 Minutes that they just stamp the certification in the packages when shown the hidden video footage.

I might be able to give Lumber Liquidators the benefit of the doubt since they wouldn’t be the first American company who was told a foreign manufacturing plant was making the product one way and it turned out not to be to specs. But that being the case, I’d expect Lumber Liquidators to test batches of their products randomly and more frequently than once a year.

What are Lumber Liquidators Customers Supposed to Do?

Let’s be honest here, while some say rip everything out no matter what (remember some of the Lumber Liquidators laminate flooring tested as safe) not everyone will be able to afford a replacement, which depending up on the laminate flooring supplier, might put those customers back into a similar position. The Chinese plants 60 Minutes visited make laminate flooring for many companies. Who knows if this isn’t happening somewhere else with or without the company’s knowledge?

I realize there will be people out there that will use this as an opportunity to complain about buying cheap junk from China, that hardwood flooring it the only way to go, or you get what you pay for.
Well apparently those folks haven’t priced flooring of any type lately like I have because even the cheap stuff isn’t all that cheap!  Carpet, hardwood, laminate, tile - even the cheesy looking stuff isn’t cheap when you need a lot of it to cover a room. I personally believe you should spend as much as you can afford in these situations because it is an investment but not everyone has the money to do that.

Unfortunately as consumers, we have no idea when purchasing laminate anything whether it contains a safe level of formaldehyde or not just by looking at the price or city of origin. Global economy remember? (I’m not a laminate hater. I’m sitting at Ohio made laminate desk while I write this post.) We as consumers have to do our own research about the things that concern us. But the companies that sell that product are also responsible for earning our trust (and patronage) by telling us the truth on whether the product passed a safety test or if they took a shortcut and just printed that on the box without bothering to test or fix a problem.