How to Replace a Rain Barrel Spigot

My rain barrel has been harvesting water for the last three years. I couldn’t be happier with it. Even better my rain barrel keeps a soggy side of my house dry. 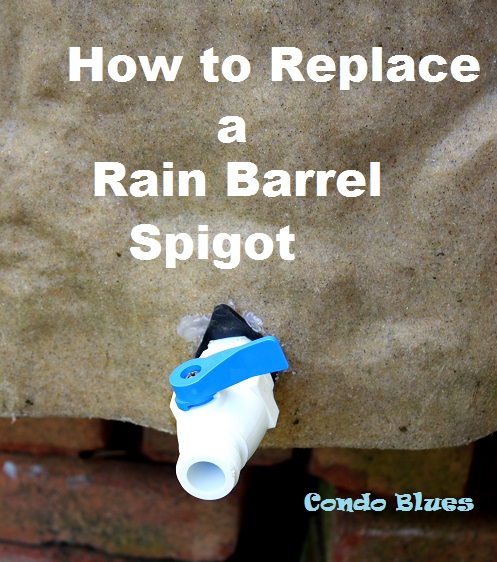 
The only downside to my 40 gallon bundle of joy is after three years of faithful service the shut off valve on the attached hose broke. I can’t unscrew it and use a regular garden hose with my rain barrel rock because it has a hose instead of a spigot. 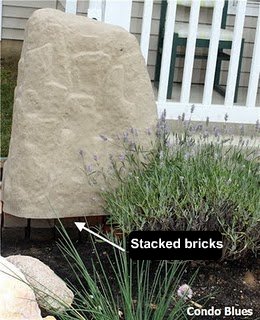 This is my sneaky rain barrel that doesn’t look like a rain barrel.
It is a Water Stone rain barrel. I bought it from Amazon here.

Installing a rain barrel isn’t hard either. Read my tutorial How to Install a Rain Barrel on Condo Blues here.

How to Add a Faucet to a Rain Barrel 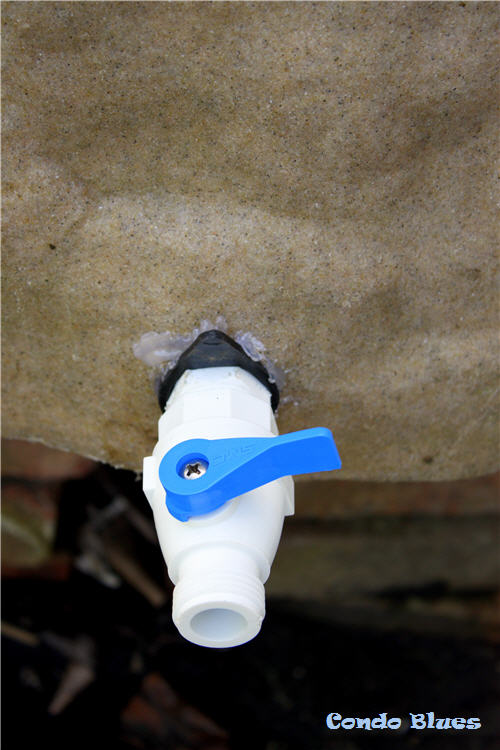 Honestly folks this rain barrel spigot tutorial is as easy as it gets. The most difficult part is finding an outdoor rated spigot that does not contain lead and I’m giving you my source for a lead free rain barrel spigot - Rain Reserve Rain Barrel Spigot Kit from Amazon. 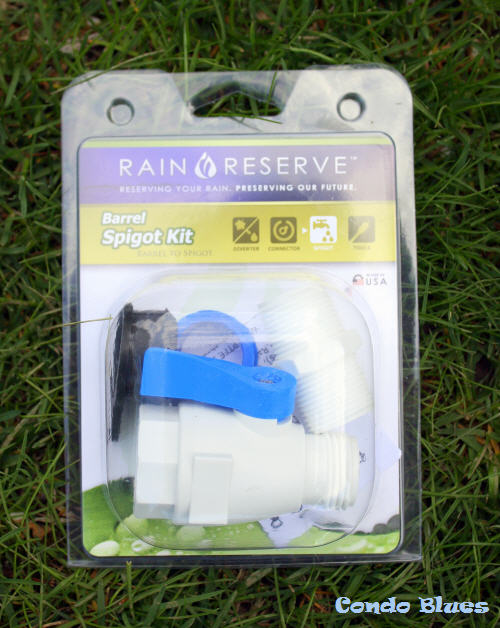 Yes, it is plastic but all of the other rain barrel outdoor faucets I found contain lead something I’d rather not introduce to my flower beds. So plastic it is.

Drill (I’m using my heavy duty Mommy’s Little Helper Craftsman 3C Drill Driver because the walls of my rain barrel are thick plastic. A light duty electric drill may do the job depending upon the thickness of your rain barrel.)

Silicone caulk and a caulk gun 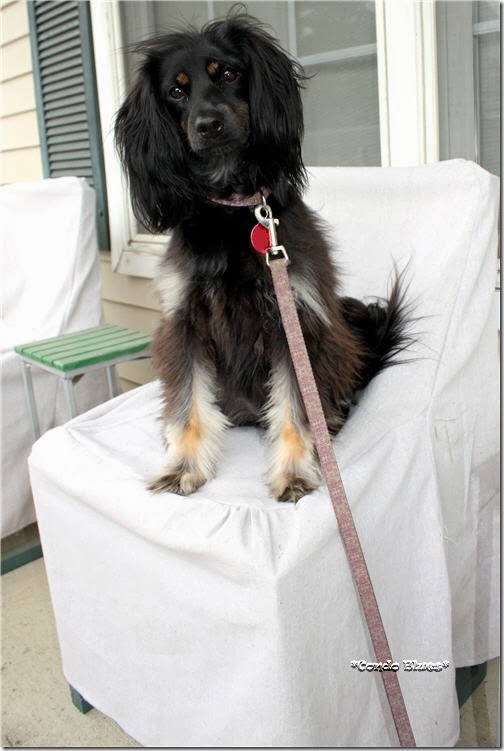 Hi everyone! Protect your peepers and wear safety glasses when you are using your electric drill.  Lisa would poke her eyes out with flying debris if it weren’t for my mad Project Manger skillz when it comes to reminding her about power tool safety.

1. Remove the old spigot and/or faucet assembly. I removed most of it by unscrewing it. The rest I removed mine with a mighty yank (or five.)

2. Hopefully you will not have to clean out the algae sludge in the bottom of your rain barrel because you are smarter than I am and read and followed my How to Winterize A Rain Barrel post here.

Most of the algae growing in rain barrels is harmless and along the lines of the algae found growing in outdoor fountains. I removed it because I don’t want it to clog the spigot. I can’t remove the top of our rain barrel to clean it. I had to get the gunk out with a combination of tipping the barrel over to let the rest of the water and algae pour out of the hole and pulling it out with my fingers.

To prevent this from happening this summer, I poured a bit hydrogen peroxide into the barrel. Rainwater will dilute the peroxide so it won’t harm my plants. Bleach works too but as a green gal, I limit my use of chlorine bleach to close to never as possible.

3. Optional: You may need to use the electric drill and spade bit to make the current hole in your rain barrel larger for the new spigot assembly. I did for my barrel but you may not need to for yours. 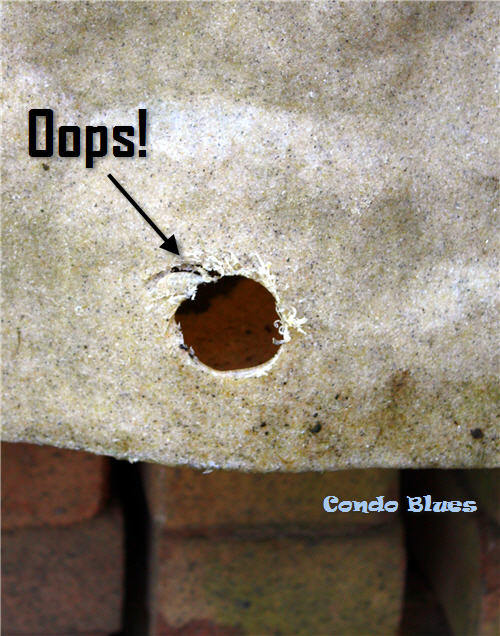 This is what happens when you try using a hole saw instead of a spade bit to enlarge the spigot hole in your rain barrel.


And yes, I wore my safety glasses!

Lacey wouldn’t stop barking at me until I did. Whatever would I do without her management skills?


4. Insert the rubber washer/gasket that comes in the spigot kit into the hole in your rain barrel. 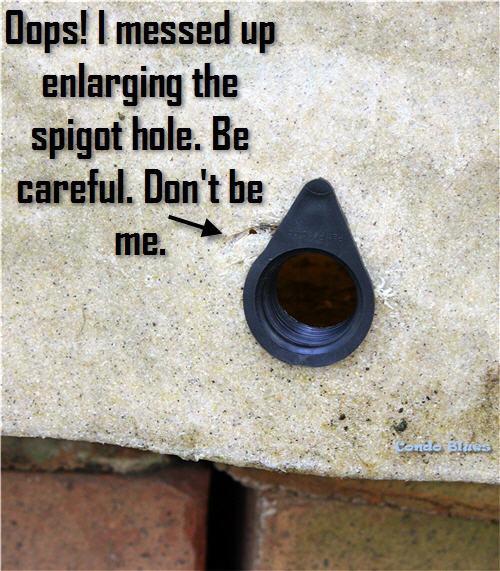 5. It is a good idea to run a bead of silicone caulk in between the rain barrel and the gasket to prevent water leaks.

Hopefully you will do a neater job with the caulk gun than I did.

6. Wrap Teflon tape around both sides of the spigot coupler threads. This is will prevent water from leaking around the spigot itself. 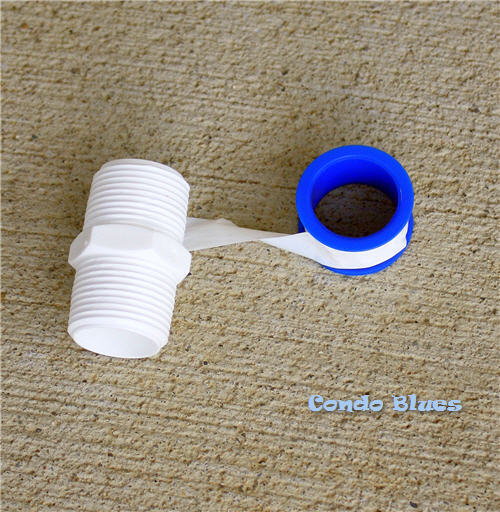 You should wrap the Teflon tape around the threads in the opposite direction that you will be screwing each side of the coupler. That way the tape says put during the installation process.

7. Use a wrench to screw one end of the coupler into the rubber gasket as tight as possible (which is why we’re using a wrench instead of fingertip tight.) 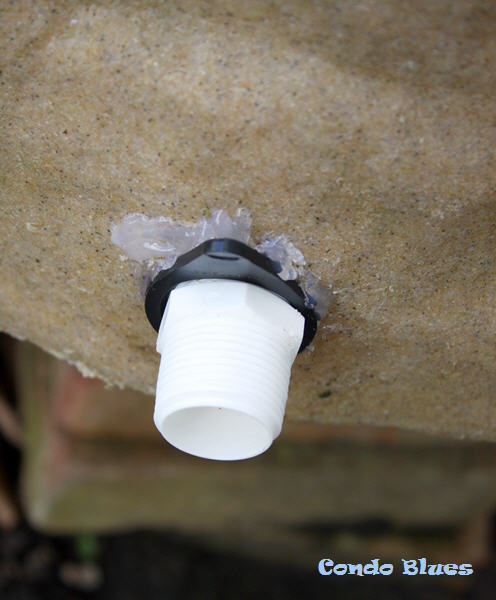 8. Clamp the pliers around the assembly already attached to the rain barrel to steady it while you tightly screw the spigot into the assembly with the wrench as tight as possible. 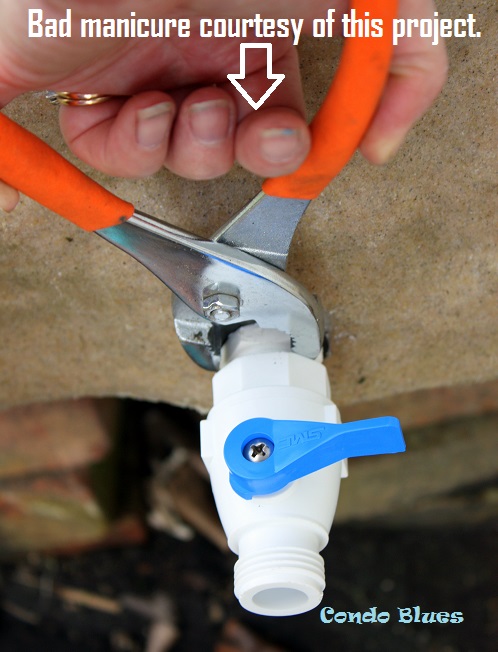 I had to stage the photo of this step and take the photo one handed because the Project Manager wouldn’t lend a paw. She claims she was on a union mandated break (that looked a lot like a nap in the sun.) That's why you don’t see me attaching the spigot to the coupler with a wrench.

10. Use the spigot to water your plants with free to you water!

Do you have a rain barrel?