It seems strange to start a landscaping project in late July instead of May but Mother Nature isn't giving us much choice. Ohio has the opposite water problem California has - too much rain.

The number of days in a row Columbus has not had any precipitation this year?

This we're lucky if we get a 24 hour period without rain once every couple of weeks. If the sun decides to visit us after a 15 to 19 day rainy stretch we learned to drop everything to do outside chores just in case it rains later in the day. 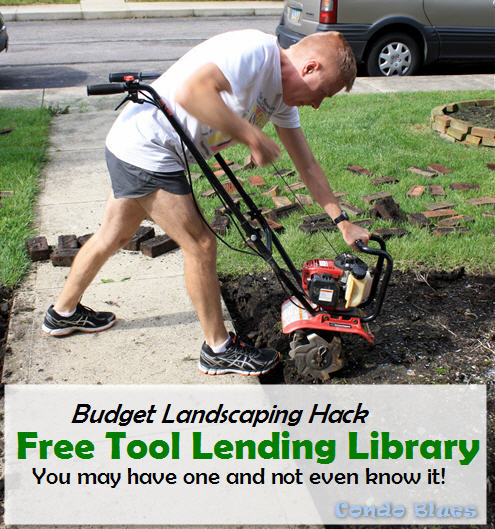 Pin this for gardening and landscaping season!


Now before you think I'm complaining about First World Problems, Ohio and the surrounding states are experiencing serious problems because we have too much rain:


Unfortunately, the horrible weather hasn't stopped our Home Owners Association from doing their job and sending us a letter telling us we have to weed and mulch our landscaping. It wasn't a surprise since our landscaping died during the Snowpocalypse and made us sing the Condo Blues for the fourth time since we bought our house.  For a long time, this is as close as we got to doing the project:


The HOA said to add mulch. They didn't specifically say put mulch in the flowerbeds so this counts, right?

Another thing that's been holding this project back is not having a rototiller. Unfortunately there is a run on tiller rentals anytime we got a window of weather opportunity to start our planing project. I did some serious searching and was considering a long drive to rent one until I skimmed an newspaper article about our tool lending library.

D'oh! It's not like I haven't used them to check out tools before. I forgot about it because I didn't think tool lending libraries were a big thing. Turns out, they are according to Wikipedia, there are free tool lending libraries in 28 states and 8 countries. (you can search for a tool lending library near you here.) Columbus has had one of the first since since 1975. So why unlike book libraries, why haven't I heard about this sooner? Have you?


The following day this happened. Husband claimed first dibs on the mini tiller that was the perfect size for our project.

how cool is the Columbus Tool Library? We checked out this mini tiller for 24 hours for only 2 bucks - the gas surcharge. #landscaping #green #garden #tools #library #ColumbusToolLibrary
A photo posted by Lisa (@condoblues) on Jul 20, 2015 at 2:27pm PDT


The surprising thing is that we got the tiller for 24 hours for a $2.00 gas surcharge from the library instead of paying for $75.00 for a four hour rental. Not bad! Save some green by going green. Love that!

Have you "rented" tools from a tool lending library?