I think tiny houses are twee and adorable. I have dozens pinned to my Pinterest boards (follow me @condoblues on Pinterest, pretty please?) I applaud living in a small ecological footprint. There positive financial aspects too. I understand how freeing that can be.

I find it hard to believe that living tiny is nothing but utopia. 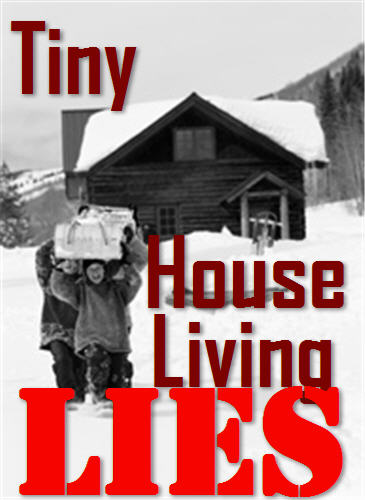 We never hear about the downside of living in a tiny home. Sure, there is talk of how difficult it can be to decide what to keep and what needs to go. However the elephant in the itty bitty room no one will openly admit or discuss especially on tiny house TV shows is this:

I don’t want to paint a picture that all tiny house builders and dwellers are shifty people who want to break the law (although there are some who knowingly do.) As a condo owner, I appreciate living in a nontraditional house that allows us to do things we want to do sooner rather than later. Some of our best adventures have been when Husband and I dove into something head first with nothing but a borrowed tent and a road map. I get it.

Since living tiny houses is a fairly new concept (unless you are an apartment dweller in a major city like New York were tiny living has been the general rule forever,) it often falls outside the current local housing laws and RV building codes. Sure, some of those laws are antiquated and should be changed. Others are there so, for example, you don’t depose of household grey water by watering your backyard. That may not be a big deal if one family does it. When you have a whole neighborhood doing it, that’s a lot of untreated plant based cleaners and dishwater finding its way into storm drains which can cause algae blooms in the local water supply. Then everyone suffers.

I  get sucked into cute and twee designs on Tiny House Nation too. Have you seen the show? The plot goes like this:

Look host dude, if I’m paying you to design and built me a custom tiny house, I expect to treated like a customer not an idiot. If you want to give me flack and talk smack about me because I want a second loft or whatever that I saw in other builds you’ve done, then Bye Felicia. I’ll find someone else to build what I want.

Of course Tiny House Nation isn’t the only tiny house reality show that warps reality (Hi Tiny House Hunters but why should that be any different from the other House Hunters shows?). Most, if not all, realty shows are set up to show a fake version of “reality”.

I just wish that with all of the shows and articles extolling the virtues of small low impact living featuring clever design that they’d also let people know the tiny house life may not always be perfect peaches and cream so readers can make a more informed choice when it comes to moving into a small home.

What do you think?