How to Make a Renaissance Festival Costume


I need a new 16th century English noble costume when Husband and perform at renaissance festivals. Thank goodness I know how to sew. It’s not like I can hop in the car and pick up a new dress at Nobles R Us!

Besides, it allows me to get my inner history geek, costumer, and creative seamstress on. 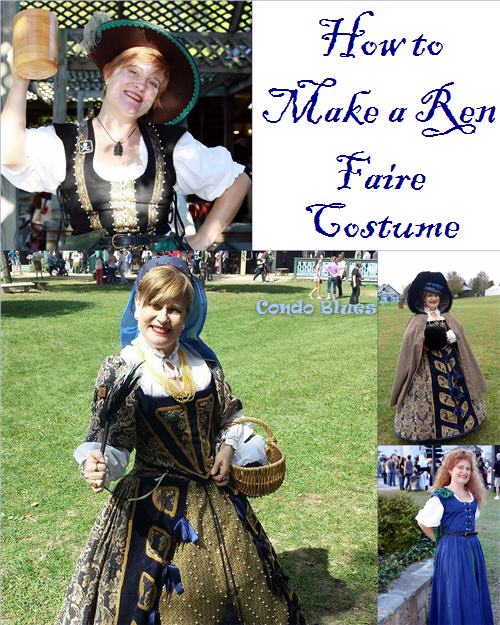 First you should decide if you want to make a historically accurate renaissance clothing (or as close as to historically accurate as we can get in the 21st century,) a fantasy type costume, or a little bit of all of the above. There are buckets of different opinions on what you should or should not do, all of which are valid because everyone’s purpose, desire, and budget differs.


This tutorial may lean toward theatrical historical costuming because that is the type of costume I am currently designing for myself.


1. What time period do you want to Cosplay?

First, you should think about what time period or clothing style you want to portray: medieval, Early Tudor (King Henry VIII,) Elizabethan (Queen Elizabeth I), Fantasy (anything goes), etc. because the typical Outfit of the Day for each time period is different.

Different countries had very different fashions too. It was one more way for other people to know if you are a rich Englishman or a poor Italian peasant instantly by sight because they didn’t have Instagram back then.

If you want to geek out on historical costume plates from ancient Egypt and around the world through time to 19th century Japan, I recommend reading A Pictorial History of Costume by Costume & Fashion Press/Quite Specific Media. I’m including affiliate links to my favorite costuming books in this post for your convenience.

If you are working at a renaissance or medieval festival or are part of a historical reenactment group like the Society for Creative Anachronism (SCA) this may already be determined for you.


2. What social class do you want to portray?

You also should decide what social class you want to portray nobility, middle class, or peasant. Each social class had strict laws about what they could and could not wear called Sumptuary Laws.

The hardest thing for modern Americans to wrap their heads around is how obsessed people were with social rank that did not change, never ever. In America  if you are born poor you can work your butt off to move up and be very rich. That didn’t happen back then. If you were the baker’s son, you couldn’t decide you wanted to be the town tax collector because if you did, who would be the baker? The people of the town would starve if you didn’t replace your father as the baker! 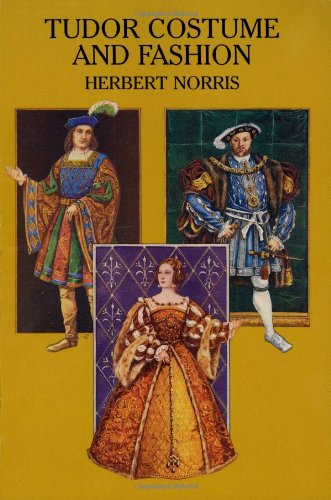 Tudor Costume and Fashion by Herbert Norris is one of my costuming book mainstays. It will not teach you how to sew but it is invaluable for the information on everything they wore from hats to shoes, for all social classes from the time of King Henry VII to the end of Queen Elizabeth I’s reign and history. My copy has a thousand bookmarks in it during costuming season.


For the most part the Sumptuary Laws were practical – a peasant farmer couldn’t afford brocade fabric or the means to clean it after working in a dirty field because there was no such thing as a rich peasant. In a medieval faire situation, it allows the patrons to easily identify your character and allow you as a performer to know how the rank of your character should interact with the rank of a fellow performer t who ranks above or below you in The Great Chain of Being.

I highly recommend buying and reading the book Elizabethan Costuming (For The Years 1550 - 1580) by Janet Wiinter and Carolyn Savoy before start making or buying renaissance faire costume pieces because it gives you an easy to read but knowledgeable overview of everything you need to know about who wore what and why, It was written for renaissance festival performers at a time when renaissance festival costume research, ideas, and costume sewing patterns and tips weren’t widely available like they are now. 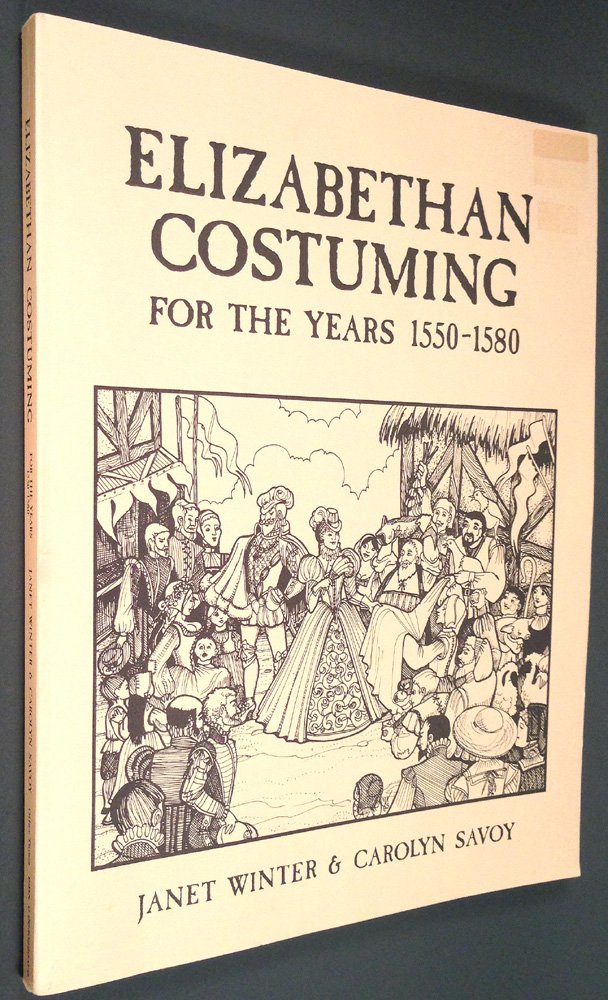 This was the first renaissance clothing book I ever bought. It is a good  I still refer to it! That. good.

Although we fudge this at Renaissance festivals for entertainment value. Historically, peasants wouldn’t make presentations to visiting royalty let alone be in the same room with them, but that is not fun to watch. Some of my favorite performance memories are from playing a peasant and doing improve Stupid Peasant Tricks for the Queen and her court.


3.  How historically accurate do you want your costume to be?

If you are a performer or work for a renaissance festival (in a booth, etc.) this will already be determined for you. Most faires and the SCA call their dress code Sumptuary Laws. Although sometimes we have to fudge this too based on 21st century show and life demands. 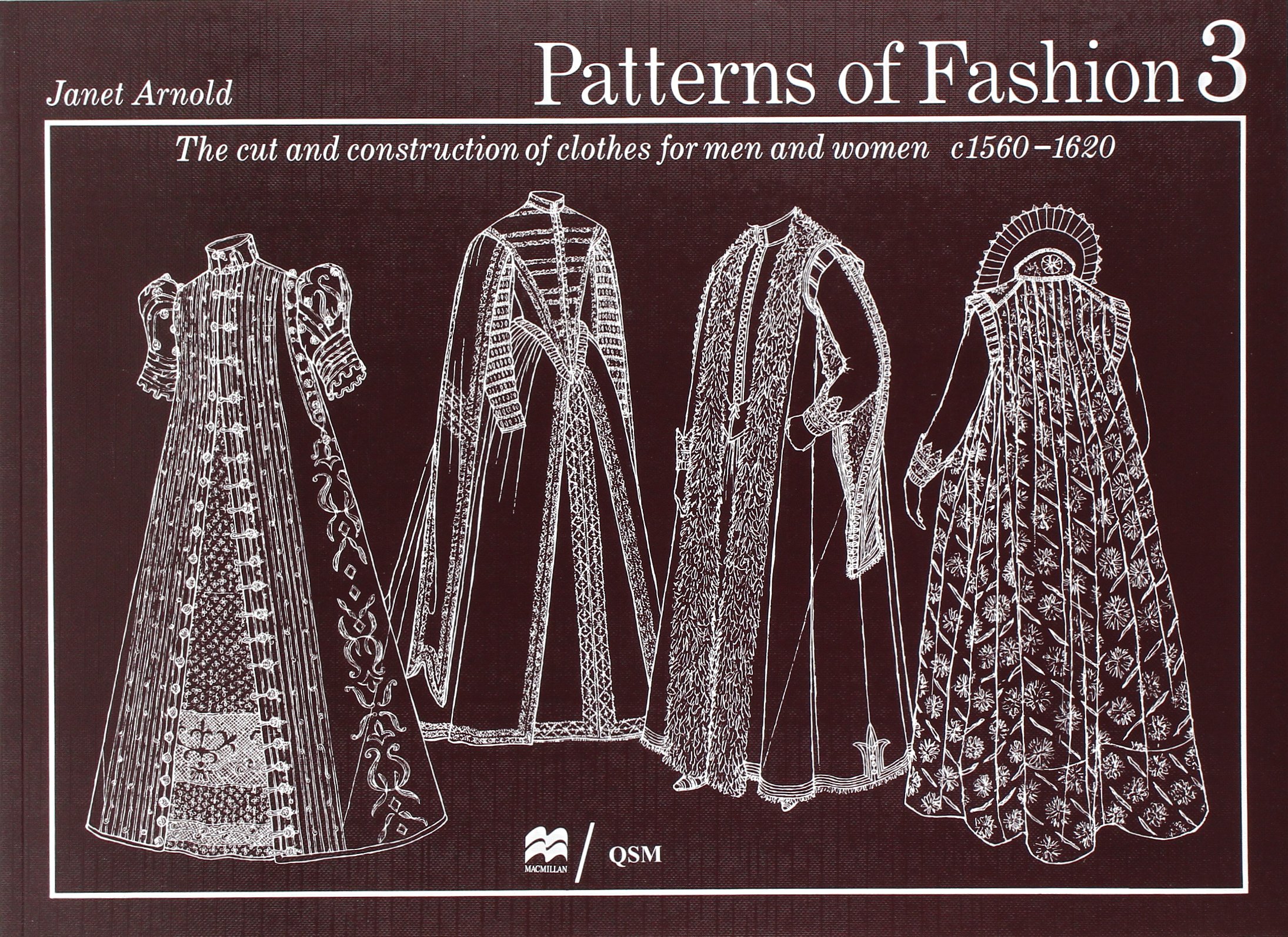 Patterns of Fashion 3: The Cut and Construction of Clothes for Men and Women C. 1560-1620 by Janet Arnold is the gold standard of Elizabethan historical clothing books! It has over 300 photos of examples many from surviving clothing and pattern drafts if you are adventurous enough to try making them.


If you are a patron, these Sumptuary Laws will not apply to you since you are paying to get in and can wear whatever you like. If you want to be a pink haired polyester princess – go for it!

Renaissance festival are historical entertainment. The whole idea is to have fun first, history second unlike a historic setting like Colonel Williamsburg, where it is history and historical accuracy first. 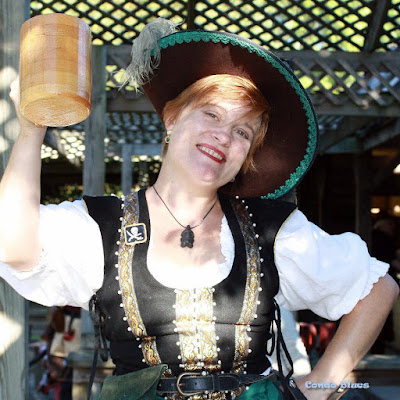 I can go chapter and verse about all of the historical anachronistic things wrong with my pirate costume (first of which is being a female pirate.) But I had a blast  visiting that ren faire dressed as a pirate on Talk Like a Pirate Day and will do it again in a heartbeat!

Wearing several skirts and petticoats may be more period but may make it too difficult to walk, dance, run, and perform outside. Most ladies wear two skirts and a pair of  Victorian-ish bloomers or shorts instead of 15 petticoats for modesty.


Most renaissance festivals are open rain or shine so if it is raining, it is your job to stand in the rain and entertain for the patrons standing under a nice, dry awning. This is when cotton peasant clothing is your friend!

Noble clothing is traditionally hotter to wear, more restricting, dry clean only, and more susceptible to be ruined by rain than lower class clothing. On the other hand, peasant clothing may not be as warm on a 50 to 40 degree F faire day.

Chances are you will stuff it in a car trunk or suitcase on your way to the show. Plastic hoops that fold are better for this than period metal or reed fatheringales. Some period fabrics wrinkle like crazy when driving from point A to B and should be avoided unless it is part of the character you want to play.. Peasant clothes you can wad up in the backseat of a car travel beautifully and are more comfortable to wear.

Peasant clothing is less restrictive, more comfortable to wear, and washed in a washing machine. I built all of my jester costumes from cotton broadcloth instead of upper class fabrics. That way I can easily clean them after rolling in the dirt on a daily basis doing physical comedy.

Noble clothing is restrictive and required servants to help you get dressed as a sign of wealth. As the Mayoress I had a hard time doing Scottish Country Dances with the dance guild because I quick stepping wearing the equivalent of a small sofa worth of fabric made me want to pass out after one dance. Now you know why court dancing is so reserved!

Some vendors or entertainment directors may require or allow you to wear nonperiod items as a form of advertisement.

For women and girls wearing bloomers under their dresses are not period but I can't recommend  them enough for all classes. No matter how careful you try to be sometimes simple as going up stairs shows off more under a skirt than you like (especially if you are wearing a hoop.) Bloomers also let you can run, twirl, dance, and play with wild abandon.

Just like in real life, the higher the social class (and historical accuracy), the more expensive the clothing.

If you are low on budget, go peasant! Portraying a peasant is probably more fun because you can actually run, skip, jig, stage fight, juggle, and bend over to touch your toes because you aren't carrying a heavy (and expensive) sword or wearing a corset and hoop. 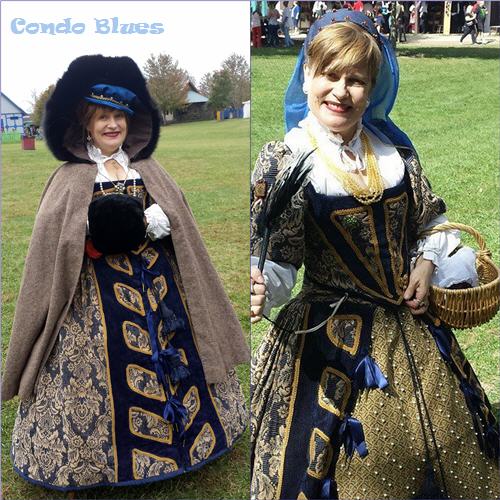 I was under a time crunch making this dress and took advice from Elizabethan Costuming (For The Years 1550 – 1580). The first season I  wore the over skirt closed. The following year I had time to add the beaded underskirt. Oddly everyone though I made an entirely new dress for the following season!

If you are low on budget, you can make your basic foundation pieces (skirt, bodice chemise for women. Pants, chemise, jerkin or doublet for men) and add accessories as time or money permits such as cloaks, fancy hats, pouches, etc.

Don’t forget your DIY and crafter friend the thrift store! You may find props and clothing you can makeover or in the case of one lucky friend, she did a Scarlett O’Hara and made brocade curtains into a dress!

Keeping all of the above in mind, I designed a new Elizabethan noble dress.Come back to Condo Blues to see the final design and to learn how I’m going to make it!