At three years old my only ambition was, um, not much beyond what any other three year old was into: toys, meals, and playtime.

Not Ryan. When he was three, actually three and a half as he always emphasizes in interviews, he started a recycling company called Ryan’s Recycling. Ryan was fascinated a trip to a recycling center and asked his parents if he could give bags to his neighbors so maybe they could give their recyclables to him. 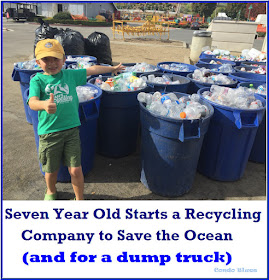 Four years later Ryan is now seven years old and estimates he has recycled over 200, 000 glass and plastic drink bottles and aluminum cans. He’s saved 10 thousand dollars from his recycling buisness and wants to to put it toward new business equipment – a garbage truck!


Smart lad. Just think how many more recyclables he can take to the redemption center over his parent’s pick up truck?

Ryan’s parents smile and say the money is going into Ryan’s college funds. Smart parents. This kid is going places and an education will take him even farther!

Why does Ryan sort bags of recyclables when other kids are playing outside? Ryan says he has a recycling business because he doesn’t want aluminum cans, glass and beverage bottles to end up in the ocean were they make sea lions sick.

Ryan isn’t just a pint size entrepreneur, he’s a also a philanthropist. He is a Youth Ambassador at the Pacific Marine Mammal Center in Laguna Beach, California. He wants to help injured sea lions so much he sells Ryan’s Recycling t shirts and donates all of the money he makes from the sales to Pacific Marine Mammal Center to help them rehabilitate injured seals and sea lions and release them back into the wild.

All of this at seven. years. old.

What an awesome kid!

What were you doing at seven years old?