7 Beginner Resin Casting Mistakes and How to Avoid Them

I was able to salvage the last builder grade vanity  from my bathroom renovation for my workshop. I want to make it into the miter saw cabinet I desperately need – on wheels! 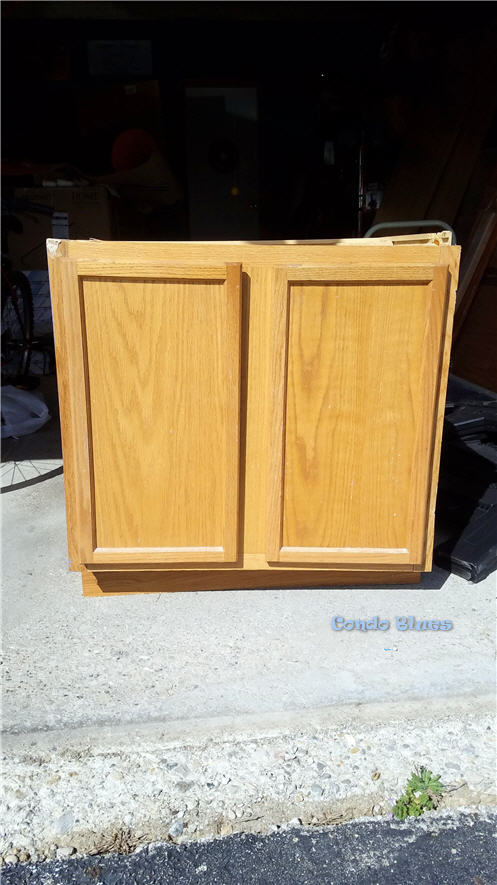 I had to make some repairs to the cabinet to fix the damage I made to it when I removed it. I added a few reinforcements to ensure the cabinet  will take stand up to a heavy saw and before I added four locking casters just like these to the bottom. (Disclosure: I am including affiliate links for your convenience.) I chose casters I can lock in place to reduce the chance of the miter saw stand rolling backwards when I use the saw. I don’t think that would be a pleasant experience.

After the structural makeover the miter saw cabinet was functional but it didn’t look so great. After a few coats of spray paint in shades of  I Found It In the Garage Blue the cabinet looked much better.  I decided to kick it up a notch. I cut wine corks in half and used wood glue to glue the recycled corks to one side of the cabinet to make a giant corkboard to hold project notes. 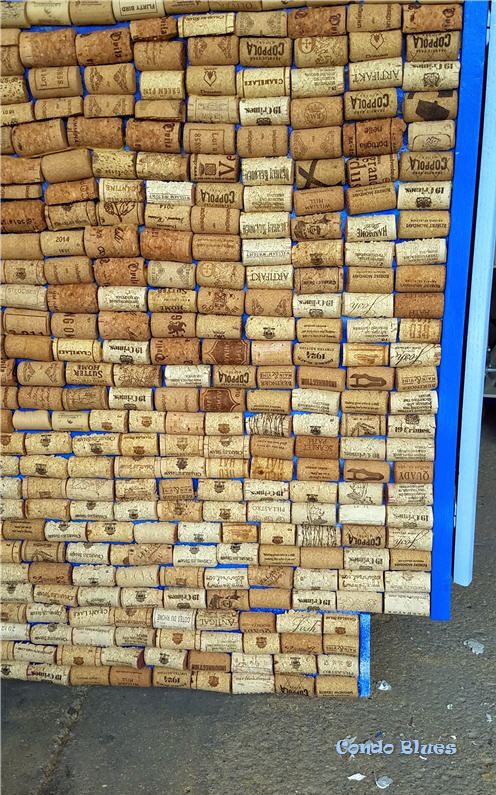 Well that, and I also ran out of spray paint.

While I was decluttering the wine corks we have been collecting forever I figured it was time I hopped on the poured resin project bandwagon and embed bottle caps (which we’ve also been collecting since we bought our house) into resin on the cabinet doors.. This is my first resin project and it shows. I made all of the beginner mistake, and lucky for you I’ll teach you how to avoid them!

I reinforced the ridiculously thin center panel on each door by using wood glue and screws to attach a piece of thin scrap wood to the back of each door insert. I flipped each door over and ran a bead of caulk around the seams of the wood insert to fill any tiny gaps between the center panel and frame of the door. This was a smart thing to do because resin will find and seep through even the smallest crack, gap, or hole. Guess who I know? 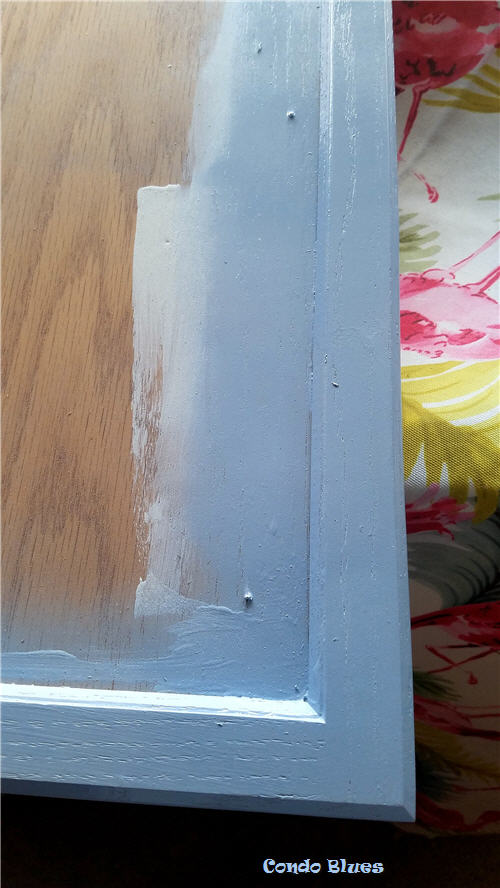 You can see how thin the center panel is from the screw pops when I reinforced the door from the back.

7 Resin Casting Embedding Mistakes I Made So You Don’t Have To! 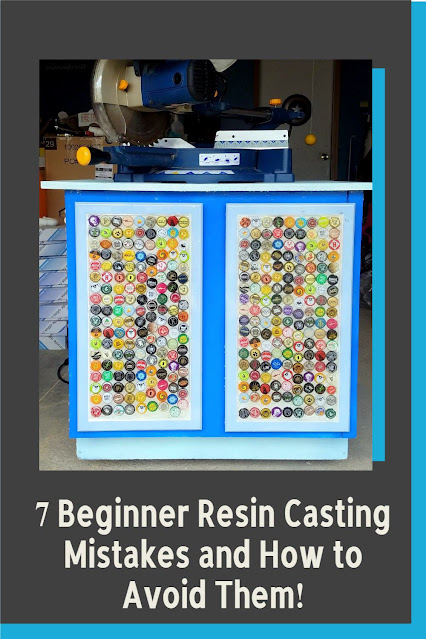 1. I didn’t pay attention to what the surface looked like before I poured resin on it. When I use bottle caps in a mosaic I can plunk down an adhesive and go to town with my design because I’ll cover it up with grout later. That doesn’t work with resin unless you want to see dried goopy tile adhesive in the final project. I didn’t.  I should have spray painted the entire door blue instead of just the edges or fixed it by using a very thin layer of tile grout between the bottle cap tiles to cover the adhesive. 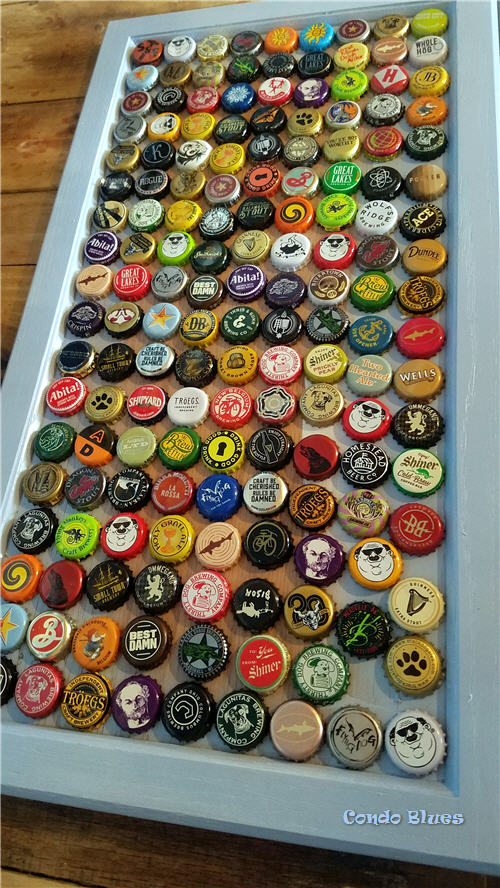 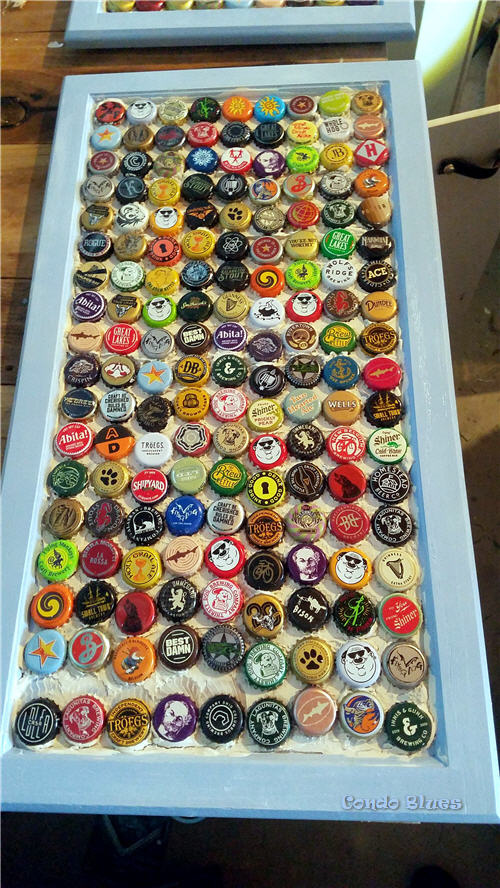 By gluing the bottle caps individually in place, I would have kept the spacing I liked intact from the dry fit.

3. I mixed the resin too fast with the wrong tool and created too many bubbles in the mix. I used a wood craft stick to mix equal parts of the resin together that creates bubbles no matter what speed you mix it at. I should have used a round polycarbonate rod like this kind which has less surface area because science. So matter how perfectly equal my hardener and epoxy parts were (and they were) I made bubbles because I mixed with a flat stick. Who knew?

4. My surface was not 100% perfectly flat and level. I checked the doors with a level multiple times and at multiple angles on my workbench. Apparently my workbench had a couple of uneven spots that caused some of the resin to drip off the side of the doors. Well, not anymore. They are filled with the resin that dripped. The surface is a little uneven in spots too.

5. I poured too much resin on my project. I carefully measured the length, width, and depth of the area to calculate how much epoxy resin I needed to mix to fully coat the surface. That part was fine, as was carefully measuring and both parts of the epoxy before I mixed them together.

What I shouldn’t have done is pour that little last bin I still had in my mixing container onto the door thinking it wouldn’t hurt to use it up. Yeah, it did hurt. It was too much resin for the recessed door area. I fixed it by using my spreader (an old gift card I spent) to coax the resin to evenly coat the entire door. I like that the paint won’t chip on the edges of the door but there are also dried resin drips on the finished project because my work surface had a minor uneven spot

6. I used the wrong tools to remove resin bubbles. Heat removes bubbles from wet liquid resin  like magic.  This exact refillable butane candle lighter removed bubbles from my poured resin project perfectly until it ran out of butane and my refill canister was empty. I also noticed that after the lighter removed bubbles in one area, new bubbles would sometimes form in what was originally an area without bubbles. It was like cat and mouse removing the first set of bubbles I made when I poured the resin and the new bubbles that showed up after removing the first set of bubbles.

In a pinch, I tried using a hair dryer on the heat setting to remove bubbles from the resin with iffy results and the hair dryer caused the resin to shift after the pour. I should have removed the bubbles in the resin with  a heat gun like this one which I don’t have but the next time I will.

7. I didn’t lightly cover the project area when I let the resin dry for 72 hours. I have two black smudges that mysteriously appeared on one door. I’m not sure how or why but I should have lightly covered the area after the resin had set to the touch.

Yeah I probably should have tried a small resin project like an embedded coaster first but after spending a chunk on resin I didn’t want to buy a bunch of molds I will never use again. Despite the mistakes, I like how the project shows off many, many years of tasty beverages often shared with fiends. The only thing I’d change besides the tile adhesive (which I can’t change) is the color I used on the bench top and kick plate which I’ll probably change once I have a coordinating color of leftover paint.