How to Make an Upcycled Lucet Crochet Fork

While drooling over wood crochet hooks and doodads on line (talk to me folks about yarn bowls. Are they good for large skeins of yarn?) I came across this weird sling shot shaped thing called a lucet (it is also called a lucet fork) that has been used since the Viking era to make cords and I-cords.

I didn’t think much about it other than a lucet looks like a cool tool (a lucet looks like this ) I may not use often enough to justify it taking up space in my cramped craft room. (Disclosure: I am including affiliate links in this post for your convenience.)

Until later on when I needed a drawstring for a crochet project and wanted something less bumpy than a row or two of traditional crochet stitches. 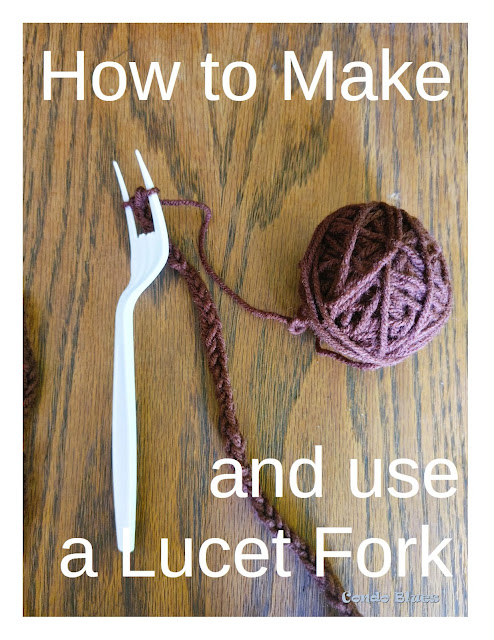 You can braid/crochet/knit the round style cord that I wanted to use as a drawstring on a lucet. Which I didn’t have, couldn’t buy locally, and really didn’t want to wait for it to be delivered because I really wanted to finish this quick little bit and call the project done.

I tried following a tutorial on how to make a lucet cord with a crochet hook but it was too fiddly for my beginner self to get right. I did a little poking around Pinterest and found that making a lucet is an easy woodworking project, which I’ll probably do later because I can. In the meantime, I needed a lucet NOW.

So I made a quick and easy down and dirty lucet fork from a plastic takeout fork (courtesy of a I don't need silverware, they stuck in the bag with my takeout order anyway – sigh.) 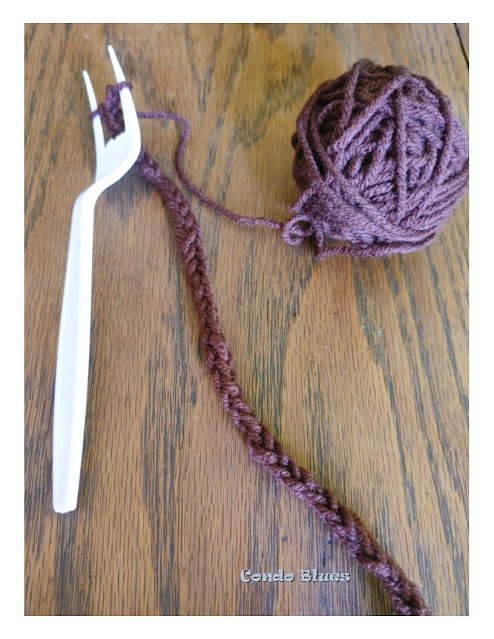 Making a cord with a lucet fork reminds me of using a spool knitting loom as a kid, except the lucet is 100% more Viking. Spool knitters are French. Who knew?

I bent the two middle tines of the fork backwards and cut them off at the base with a pair of heavy duty craft scissors (you can learn more about my Fiskers craft snips here Love them!) and ta da! A no frills but serviceable homemade lucet fork at the perfect price point if I try it and find out I don’t like it.

I followed the how to use a lucet fork tutorial below and made my drawstring.

It was kinda fun. I think it would be a little easier to use if the tines were curved like the store bought option to keep the loops from accidentally slipping off while I’m working. I’ll keep that in mind if I decide to make a lucet fork out of wood later on.

Looking for more finger, crochet, and knitting loom ideas? Check out the following options – and more! - below!

Hi Lisa! This is a fantastic idea ♥ I have a bulky wood lucet fork and I'm always wondering how to make a smaller, tighter cord with it and this will do the trick! Thank you for linking up at our weekly Link Party! You are being featured at our Wednesday Party #443 this week. Here’s the direct link to the post in case you’d like to share your feature:
https://oombawkadesigncrochet.com/oversized-crochet-sweater-upcycled-pin-cushion-diy-lucet-fork-link-party-443/

Hope to see you again next week! Rhondda

awesome! i hate making i-cord; this looks like my new best friend. 😁