Blitzkrieg needed a costume for the Capital Area Human Society’s Halloween Pet Parade but what do you do if you dog hates costumes?

After watching way too much of the evening news. I got it!

I gathered my materials… 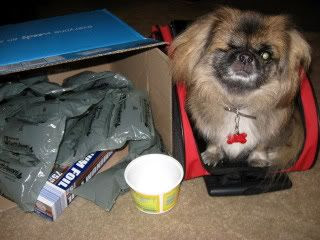 When Alice.com asked me to recycle the packing materials that came with my order, I don’t think they meant this way. *evil grin*


…and used them to create this. A dog Balloon Boy costume! 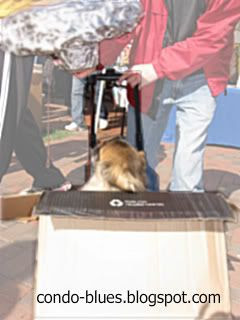 I played with Photobucket to make Blitzkrieg's costume stand out in the foreground of these photos since there's so much going on visually in the background.

Husband held the balloon in the parade and I pulled Blitzkrieg in the box I attached to his wheeled carrier. 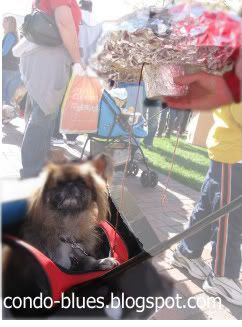 Blitzkrieg's Balloon Boy costume was a hit. We helped raise money for one of our favorite charities and Blitzkrieg earned some noms doing it. High fives and tail wags all the way around.

Oh WOW....that is cute! Thanks for visiting. I'm painting the cabinets white and have already put the first coat on. I'm really loving the white!!

Amazing- I'm sure everyone loved it!

Too cute (and very clever)!!

LOL LOL Romeo likes this! Romeo is a pirate this year

What a clever idea! I bet there were people having ten kinds of laughing fits over this. Your fur baby is adorable even without the costume.

That is so funny! You are a clever one :) and I'm sure Blitzkrieg was the hit of the parade.

Love it! Thanks for the laugh this morning. :-)

I...love....this....so much. I can't even tell you how happy this made me! I've been so busy with everything and then Brett was like, "Did you see Lisa put a link of Blitzkrieg's balloon boy costume?" and I was like, "I have to go look at that right now. Right now!!"

I am so glad that I did. I am showing everyone. You are so clever. Who would've thought you could make that costume for your dog?!?!