Keep in the Heat: How to Easily Insulate Outlets and Light Switches

In my effort to keep my natural gas use and heating bills low I sealed all the gaps and air leaks around my windows and I put door sweeps on the outside doors. In certain areas of the house I felt a little chill. I found the culprit when I put my hand up to an outlet on an outside wall and it was cold – another air leak. 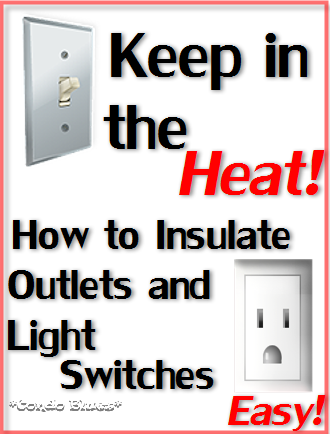 Looks like I’m not the only who has air leaking into their home from outlets and switches on outside walls. Val, Mike and Brax asked me:

“We noticed the other day there was actually frost forming on one of our electrical outlets, accompanied by a very heavy freezing cold breeze blowing out of the outlet holes! My first concern is that condensation/moisture and electricity don't typically go well together, besides the fact that it was like an AC blowing in our house. This outlet is on an exterior wall, of course. How do you fix this? Right now we just have those child proof plugs in the outlet holes!”


Condensation and electricity? Yikes! That’s something I wouldn’t want to mess with either. It sounds like there isn't enough insulation around Val, Mike and Brax’s electrical outlet box or possibly in the wall itself. The first thing I’d do is take the face plate off of the outlet and take a peek. If there is a big gap between the side of the outlet box and the wall itself and little to no insulation, you can squirt a bit of expanding spray foam to seal the air leak. You may want to turn off the electrical to those outlets before you spray around them to prevent you from getting zapped. Yes, I know from experience. Don’t be me, OK?

The gaps between the wall and this outlet box isn't too bad. I could seal this with caulk or spray foam just to be sure. Since these gaps are fairly samll and the wall is insulated an outlet gasket will work just as well.

To seal air leaks around the light switches and outlets on the outside walls of my home, I put foam outlet gaskets around the outlets and switches. They also help insulate them from the cold. You can buy them at any home improvement store for a couple of dollars. Of course the Blues part of Condo Blues bit me while I was at Lowes’- my second home. They didn’t have enough outlet gaskets and they were out of light switch gaskets when I wanted to insulate mine.

What’s a gal to do? Make them myself of course!

How to Make Foam Light Switch and Outlet Covers (in 15 Fun Colors!)

I hopped on over to Target and bought a package of children’s fun craft foam. You can also reuse clean Styrofoam meat or vegetable trays. I didn’t have any of those because I try very hard not to buy my vegtables and meat packaged that way because I can’t recycle the packaging. As always your mileage may vary.

I took the outlet/light switch plate off of the wall, traced around it with a pencil on the fun foam, and cut it out with a pair of scissors.

I put the foam gasket around the outlet/switch. Then I screwed the switch plate on top. No one sees it or the crazy Technicolor insulated gasket but I know it’s there because it keeps cold outside air from leaking thought the outlet/switch and into the house.

Easy! And cheap. Actually the fun foam way was much cheaper because I bought a whole package of fun foam that was more than enough to do all of the light switches and outlets in the house. Normally you only have to insulate the outlets and switches on the outside walls of your home but I had so much craft foam left over I decided to insulate everything.

This is a great kid project! They trace and cut and you deal with the putting it on the outlet part. It’s a good way to show the kids that there is more than one way to green a home and that little things like stopping air leaking from switch plate and outlets is just as important as the big expensive oh la la green home improvements. And maybe just maybe it will incite the kiddos to turn the lights off when they leave a room in order so save more electricity. However that may be wishful thinking on my part.

Since I made my own I was able to insulate the triple and quad light switches I have in every room and odd shaped outlets like those in my utility room for my washer and dryer plugs - that helped more than I realized.

I also put child proof plugs in the empty outlets we don't use to keep cold air from leaking into the house through the outlet itself. It wasn’t practical to put them in every unused outlet because they are such a pain to remove when I need to use the outlet on occasion. There are about three outlets in the house where one of the plugs doesn’t have a plastic child proof plug in it for easy access when I need to use the sweeper, plug in the Wii, etc.

I keep everything place during the summer. That way I keep the cool air conditioned air from leaving the house through air leaks around the outlets and light switches. What do you do?

Brilliant idea with the fun foam -- I think I gave all our old stuff to Goodwill, but that sounds like a good use for outgrown/outgreened craft supplies!

What a great tip! Thanks for sharing this, as I just checked our exterior-wall outlets and sure enough, they're drafty.

I LOVE this idea especially the four quads. Do you think you should do the same thing for outside outlets?

This is a great tip. My mom gave me some of those outlet insulators a year or two ago and I never put them in. It's definitely on my to-do list for the weekend!

Wonderful post! I was so irritated that our hardware store was out of these when shopping there about a month ago. Now I can make my own! I even have a foam meat tray from dinner last night. Love it!