Why Does My Faucet Need Batteries?

That was the first question out of my mouth when I toured the Delta faucet headquarters as part of the Delta Faucet Company DIY 2011 blogger tour.

While the Delta Touch 2O faucets are useful when your hands are covered with paint or food goo and you don’t want ick up the handles, I just couldn’t get past it is a faucet powered by batteries. Electric and water are not good friends. Given my luck with batteries failing during multi day blackouts I had visions of the batteries dying and not being able to wash my hands.
Turns out if you ignore the indicator that the batteries need changing you can still turn on the facet with the manual handle.  The batteries last up to three years.
Oh.
Another nice thing about the Touch2O Technology faucet is the batteries turn off the facet after several minutes in case you have someone in your house that has that horrible disease Not Able to Turn Off Running Water, which apparently includes cats as well has children. The touch faucets (as well of most, if not all, of Delta’s line) use less water and are Watersense rated. Watersense is the EPA’s version of Energy Star for plumbing products.
Oh again.
Pretty gutsy (jerky?) for someone who Delta greeted like a movie star when she and her fellow other bloggers walked through the front door. 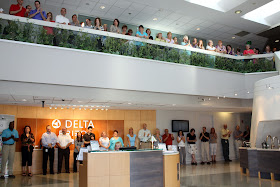 Everyone in the corporate office applauded when we walked into the lobby!
The GREAT GOOGLY MOOGLY I AM BUYING ONE OF THESE BATTERY OPERATED FAUCETS AS SOON AS I GET HOME!  moment came late in the afternoon when Delta had us do a little DIY (yay tools!) and install the even more freaking sweet Touch 2O.xt faucet. 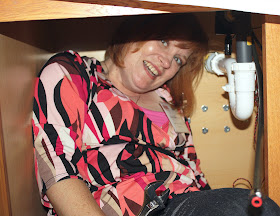 I learned I am short enough to sit straight up when working
in a lavatory sink cabinet. Good to know.
Based on my experience when remodeling my bathroom I expect a little pain when installing a faucet because, well, I named my blog Condo Blues for a reason. The Touch 2O.xt faucet had a few extra steps but overall it was a painless install due to the how they label and package the parts for each step in the instructions. Smart!
The best part of the Touch 2O.xt faucet came when we turned on the water. You can tap it to turn it on or you can put your hand next to it and use THE FORCE to turn it on and off! 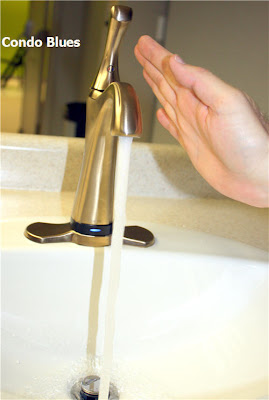 Luke, use the Force. Wash your hands. They are dirty.
Actually, the Touch 2O.xt operates on the scientific principle of capacitance, not the science fiction principle of The Force. Capacitance is the same principle used to operate touch screens on smart phones and tablet computers. The gadget gal in me geeked out.
It wasn’t hard to geek out during the trip. As someone whom for all of my adult life had no say in what my faucets and shower heads looked like or how they performed (often poorly), I thought it was quaint at first that everyone at Delta is so into water. They geeked out on how people use faucets, the technology they develop to make low flow feel the same or better than water wasting gush flow, and used terms like Shower Experience. It wasn't until they suggested we start our day with a backwards shower - reversing every step in our shower routine - that I realized the order of my quick shower routine made a difference in how I felt when I started my day.  (Did I mention I am kinda a jerk to think that? Because I think I am.) Don't believe me? Try it. 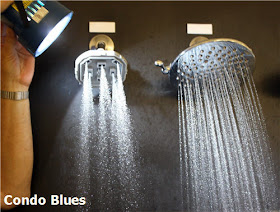 They used strobe lights to show us the water patterns of their shower heads.
The only thing that would make the demo sweeter is disco music.
That’s because everyone we met at Delta really likes their job. They aren’t just punching a clock and have a passion for what they do. It was hard to not get excited as the day went on because we met people who design beautiful things that solve problems. Delta welcome pointed questions from us bloggers. Delta asked us some pointed questions too. All in the pursuit of solving problems. 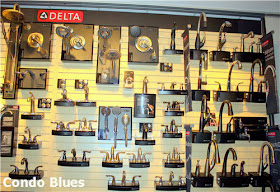 The Delta line and me with a tiny purse.
How in the world can I sneak all these pretties home?
I fell hard for the luxury Brizo line. Designers say faucets are the jewelry of the room. With Brizo it's not jewelry, it's art. 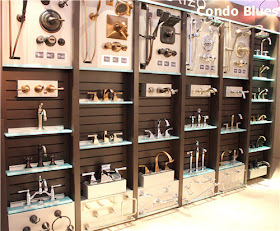 I can't believe faucets could be wicked sexy. Brizo is - rwor!
I can have pretty AND water saving AND address issues I though were just my personal quirks? Sign. Me. Up. 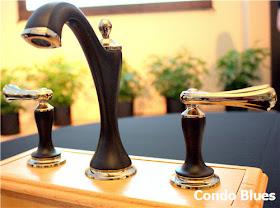 Meet Charlotte. She's beautiful.
The design sucked me in but the stories about Brizo being inspired by an Erte (one of my favorite artists!), twisted wrought iron gates, a lighthouse, and a swan made me stay. And drool. The design inspiration stores make Brizo even lovelier.
I don’t know about my fellow bloggers, but I daydreamed about replacing the rest of my ugly but water saving shower heads and bland builder grade faucets all the way home. 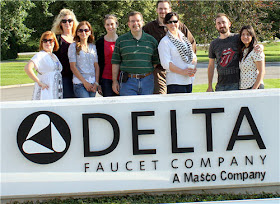 Lisa from Condo Blues, Holly from 504 Main,Roeshel of The DIY Showoff,
Emily of Merrypad, Dan of Daily Home Renovation Tips, Mike of Handyguys Podcast, Maggie of Holyoke Home, and Joey and Lana from Joey and Lana Make A House A Home
After my trip I called my Dad on Father's Day. Dad told me he was renovating his bathroom. The first sentence out of my mouth was, “Dad, your faucet HAS to have batteries!”
I’m convinced.
Nice job Delta Faucet Company.
Did you enjoy this post? Get more like it by subscribing to the Condo Blues RSS Feed  or to Condo Blues by Email.
Lisa Nelsen-Woods at 6/26/2011 08:53:00 PM
Share

I'm a faucet geek, too. I would have been drooling over all of the beauty, too. You did a lovely write up on your experience. Thank you!! I may actually look into buying a new kitchen faucet with batteries - and that's crazy talk.

Kristin - LOL! We're kicking around a kitchen faucet purchase as a cheaper tweak our kitchen. We like the sprayers but have concerns when we see the demo models won't snap back into place. I mentioned that to the Delta folks and they said they are the only people with magnets in the sprayer so that won't happen. I thought it was cool.