Finally, finally, FINALLY! There is a new craft show on TV. It is called Craft Wars. The first episode airs on TLC tonight. Now I can spill the beans. I auditioned for it. 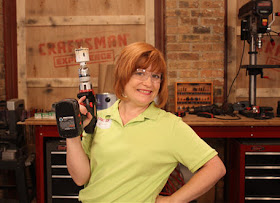 Yep. I made a total goof of myself in my audition video. I sound like I have a lisp because of the microphone on Husband's point and shoot camera. Despite that the casting people asked me to reshoot it and add bigger projects to my audition video. That's why I'm wearing different clothes during the last part of my video. I took it as a good sign.

I had to sign a contract that I wouldn't tell anyone until after the show airs even if they didn't cast me. I figure it's OK because the first episode airs tonight.


As for what Craft Wars is about, I don't have any more information than you. I know Cathie and Steve from Creative Juice are involved with the show (red headed Midwestern gals REPRESENT!) Tori Spelling is the host. Apparently Tori is a crafter and just launched a line of jewelry craft doodads. There are some craft bloggers cast as well as artists. No one's saying who. All I know is it is not me. This may not be such a bad thing because my sister was going to be my assistant. We share the same wackadoo sense of humor and have so many inside jokes our husbands turn to other regularly, give a shrug, and say, "sister thing." We'd totally be kicked off the show for entertaining ourselves doing stupid stuff like screaming, "Donna Martin Graduates!" throughout filming.

The same people who make Cupcake Wars are producing this show. I expect some of the manufactured reality show stuff to happen given it's a competition show and they like to edit these things to create tension and drama. Or maybe they won't. I guess we'll find out tonight.

The big question buzzing around DIY and craft groups is will this show bring back crafting TV shows? I don't know. I hope so. What do you think?

Disclaimer: No one paid or asked me to write this post.

Cute video! I would love to see you on a craft show! And I'm pretty sure I will get to one of these days;)