Lacey’s obedience and behavioral training is working! Lacey is consistently walking at our side 90% of the time on a loose leash. Yay Lacey!

We are now able to work on the next layer of Lacey’s behavioral issue onion – meeting other dogs and introducing her to new people and places. First, our behaviorist brought a fake dog into our yard and instructed Husband and I to give Lacey a verbal correction when she acted out. We use the sound AH AH because it has the force behind like a Momma Dog's You-Are-Not-Behaving-Stop-It-Right-Now bark unlike using the word NO.  The only people I knew who forcefully use NO consistently are toddlers and we are a smidge past that age.

On the one hand, it makes perfect safety sense to use a fake stuffed animal in this situation because you don’t know what reaction you are going to get from the real fearful dog. Poor fake dog has been growled at, attacked, and peed on in the line of duty. Sad fake dog face.

On the other hand, and in the crazy part of my brain that is not a responsible adult, it is funny seeing a grown man bounce a stuffed animal on a in leash in my backyard. However dedicated dog people know that sometimes you have to do strange things to help your dog learn how to be balanced and happy. Besides fake dog worked and we were able to work with his real dog on later appoints. Thank you fake dog!

After Lacey's second session with a real dog, Husband and I were hopeful Lacey might be able to handle all of the activity (and hopefully fun) we had planned for her on Memorial Day week.


We took Lacey to the Pet Promise Rescue Run, a charity we supported with Blitzkrieg (you can read about it here. I wore a photo of Blitzkrieg with the canine cancer ribbon in his honor because while we will always  support rescue dogs, we feel it is our duty to put a face to canine cancer. You can learn how I made my pin here.

We had a plan to not do the race and leave early if Lacey couldn't handle it because it is full of triggers - dogs, strangers, and noise. Rescue people understand these things which is why we socialize fearful dogs at rescue events.

The other reason is I get to earn yummy treats! Uh, I mean help my fellow rescues.

Our training paid off and the three of us were able to walk the race! To set Lacey up for success, she walked in between Husband and I so her “pack” surrounded her. We acted as a buffer between Lacey and other dogs like we do with our trainer.

I treated myself to a little hand stamped bling while we were there.

It says My favorite breed is a Rescue.
I told Lacey this bracelet means I am hers forever, just like her dog tag means she is mine.

Lacey also played hostess to two wonderful friends who came to stay with us from Germany. We were able to work on not jumping on new people, sit and staying when the front door opens, and her separation panic when we left the house to show our friends the sights (I will show you in a future post!) Lacey did well and charmed our friends so much they bought her a toy because they pitied the poor American dog who only had
rags to play with. 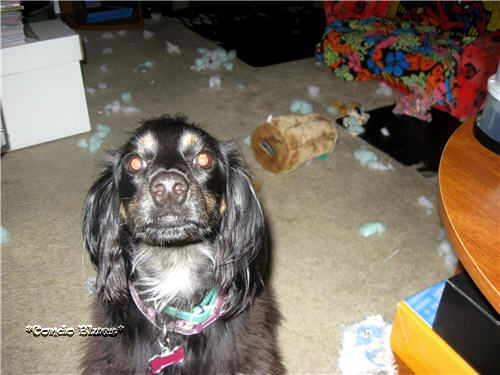 You guys,  I have no idea what happened!
The stuffies. They just, they just, EXPLODED all at once on their own!

Lacey was a little nervous during their stay because she thought they might be here to take her away. No chance, I checked their suitcases before they left!

Lacey was extra snuggly and velcroy with me, which is sad and sweet at the same time.

We gave her a day to chill. Then her dance card started to fill unexpectedly.
Husband and I didn’t plan for Lacey to be such a social butterfly and she surpassed all of our expectations, which were low because we've only been working with her for four months.

We were surprised we did not have to use Plan B or leave early during any of the visits or events because we unintentional threw a lot of social interaction at Lacey than she normally deals with. Lacey surprised us in so many ways.

I am so proud of our little recycled girl!