I wanted my spare bedroom to be a sewing/craft/guest room when we moved in. Unfortunately it quickly turned into a place where old furniture came to die.

Fortunately I used that to my advantage. Free and repurposed craft storage? Yes please!

My craft table is an antique enamel top table. It was the kitchen table my mom used to eat at when she was a little girl. It is a dream to cut fabric on because it’s slippy when I need it to be. Slap a bath towel on it and it makes a good impromptu ironing board for small projects. 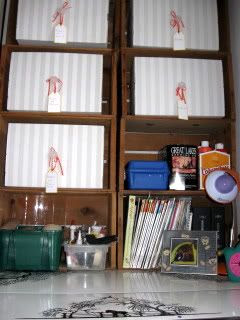 Now to store all of those bits and bobs and stash waiting for creative reuse. Using the old “if you can’t build out build up” and a bunch of wood fruit crates a former tenant abandoned in the basement of our old rental (clearly they were insane to leave these gems behind) I stacked them on the table to use as shelving. 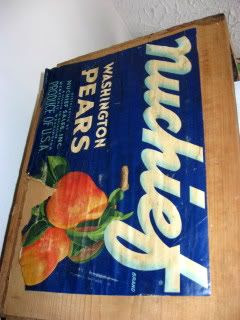 Can you believe someone left these sweet babies behind?

I was about to blow a wad of cash on bins to fill my fruit crate shelves when I spied two sets of temporary cardboard storage drawers in the recycling bin. Would they fit? 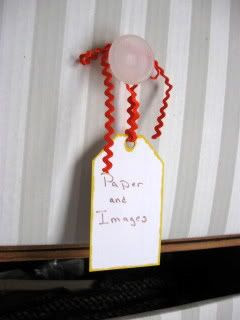 Oh yes they do!

I spent a rainy day sorting through my crafty bits and put like items together in each drawer. I made labels by gluing two old business cards together, punching a hole in the top, and tying them on to each drawer pull with rick rack from another crafter's stash. 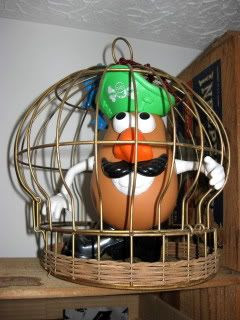 I bet I could sell him for a million dollars on EBay because he’s a collectible.
It said so on the box - that I bought at Big Lots.

Miss R. asked me why Mr. Potato Head is in a bird cage (left over from that “hey let’s put pillar candles in a birdcage” thing we all decorated with in the 90’s). I told her that he is Pirate Mr. Potato Head and he was bad so we put him jail.

I used a few six pack holders to hold my craft paints. I didn’t cover them because I hoped it would go with the food/fruit crate thing. Let’s go with that instead of the boring truth. The cardboard drink holders quickly solved a storage problem and I haven’t gotten around to prettying them up. 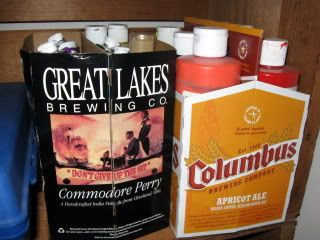 An homage to two of my favorite local craft beers. 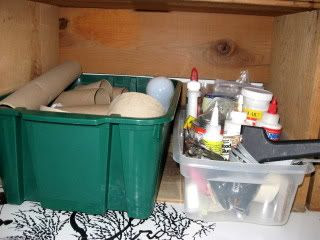 Nice and neat with a little bit of character. And the price? Free!

Oh I love that! Great reusing! I have high hopes for something similar if I ever live somewhere with a spare room!

That's fantastic! I use clementine crates for towels, fruit, etc. in the kitchen. I hate having to buy organizational stuff.

Aaahhh, you KNOW how much I like free! It looks great, you really scored on those fruit crates. What kind of person would abandon those? :)

The "temporary holding area for can-I-do-something-with-this? items" is my entire house. I cannot believe someone would leave the crates behind.
Free Pirate Mr. Potato Head!

LOVE the Crates and the Birdcage( of course)
Just popped over to say thanks for visiting and entering the giveaway!
Let me know if you follow or post a link and I'll pop in some more entries for you!
Good Luck!
Annie x

I'm in envy of your great looking shelves. They are nice and tall with roomy cubbyholes. Great storage for crafts and your supplies.

Brilliant! I love the idea of using the cardboard drawers instead of those fabric bins.

It all looks so nice and neat. I'd love one of those tables too.

Free! and great looking. I've got a whole room full of "I can use that someday." I'm proud of you for only having a bin full of someday stuff. Bravo!

I love enamel top tables. I used to have one (my grandmother's) but I've since given it to my mom since I didn't have space for it anymore.

yep I love me a fruit crate....thanks for sharing your cool org ideas!